Buy the Rumor, Sell the News

All those bemoaning what rate hikes could potentially portend for the US Dollar need to get a grip, the rate hikes are already priced in. That’s how markets work, buy the rumor and sell the news or actual event. Moreover, not just one 25 basis point rate hike, taking a look at that chart, several rate hikes have already been priced into the US Dollar Index.

It really has been the perfect storm for the US Dollar Index from struggling emerging markets to the oil and commodities meltdown to the strong economic data here in the states and Europe finally initiating a QE Program. But the trade has gotten way ahead of itself, probably the most crowded trade on the street right now, and definitely due for a pullback. The momentum resulting from the start of European QE being the primary catalyst with the Euro cratering far beyond the fundamentals of historical relationships between the two currencies. It too is overdone to the downside and due for a snapback rally either this week or next, and the coiled nature of that trade suggests the snapback will be rather sizable. 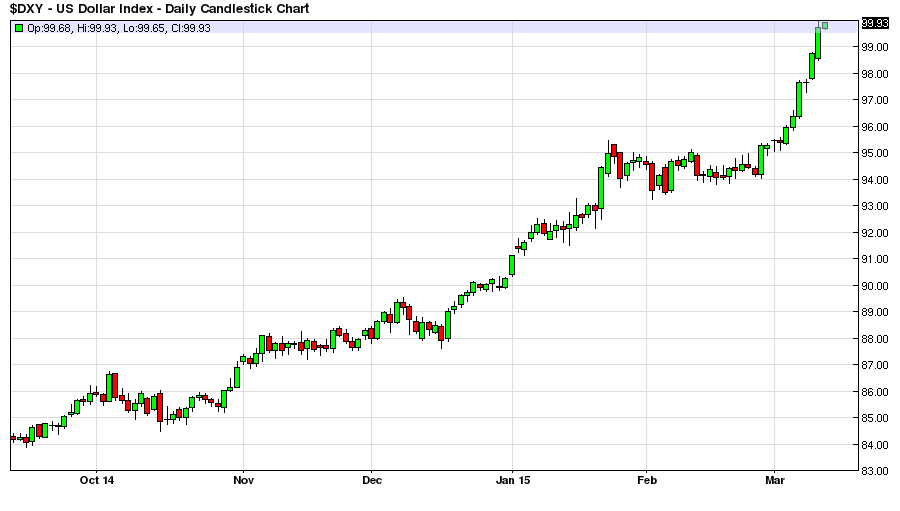 Therefore all those worried about the appreciation of the US Dollar Index being the end of the world can take a deep breath and relax. The Fed can still raise rates and the US Dollar Index will probably weaken on the news from current levels. There has been a lot of bullish optimism for a country that continues to push out an unbelievably high level of government debt each year to be financed and subsidized outside of its cash inflows. The US Dollar isn’t always going to be this strong versus global currencies, even with much higher short-term interest rates. 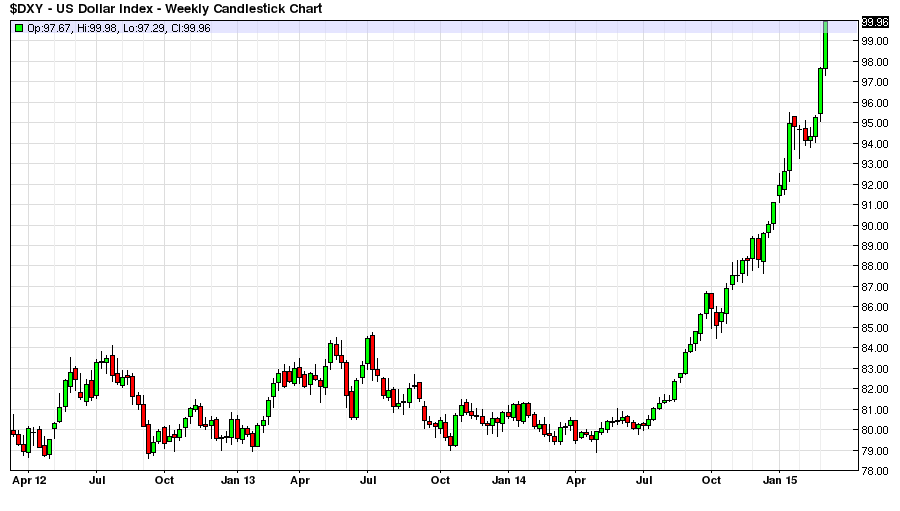 However even if the US Dollar continues to appreciate, big freaking deal, it has happened before in this country and the economy didn’t fall off a cliff. In fact just the opposite occurred, a strong dollar means the US economy is competing on the global stage in a very robust manner. This is a good thing, like cheap energy and a robust job market, nothing too complain about! How did Australia survive all those years when their commodity based economy was performing so well and ahead of its peers? They had a strong currency and much higher interest rates, and their economy didn’t fall off a cliff due to either of those factors in having higher interest rates and a stronger currency than most of their global peers. This is how finance and currency crosses are supposed to work in a market based global economy. 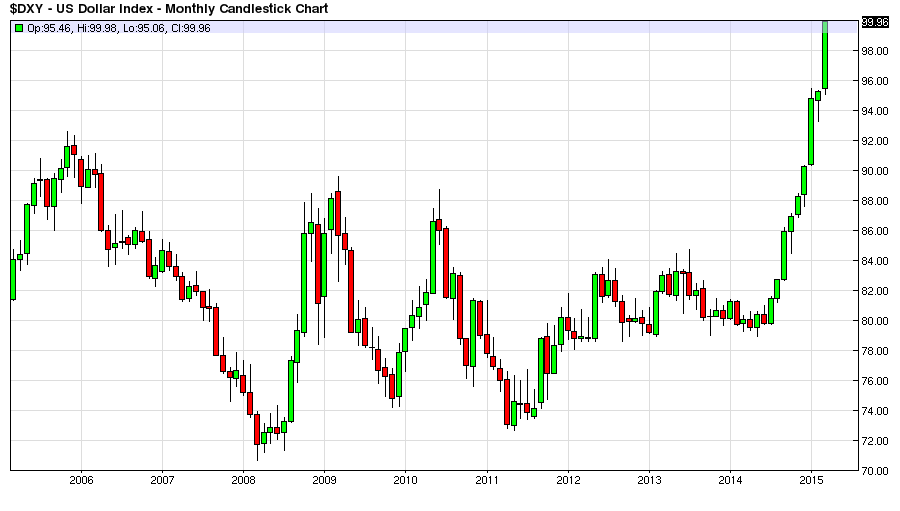 All this whining about a strong US Dollar Index and Rate Hikes is really about the end of government handouts, corporate welfare programs for the 1%, and just plain weak mindedness in general. Like they cannot possibly succeed on the world stage without the psychological crutch of a weak dollar! The ironic part of this whole consternation over the appreciating dollar is that most of these same people were complaining about the disastrous effects of the weak dollar just a couple of years ago. You know oil is going to 200 dollars a barrel, inflation to 6%, and the purchasing power of the US Consumer being eroded indefinitely, not to mention how expensive it was to travel to other counties for Americans. 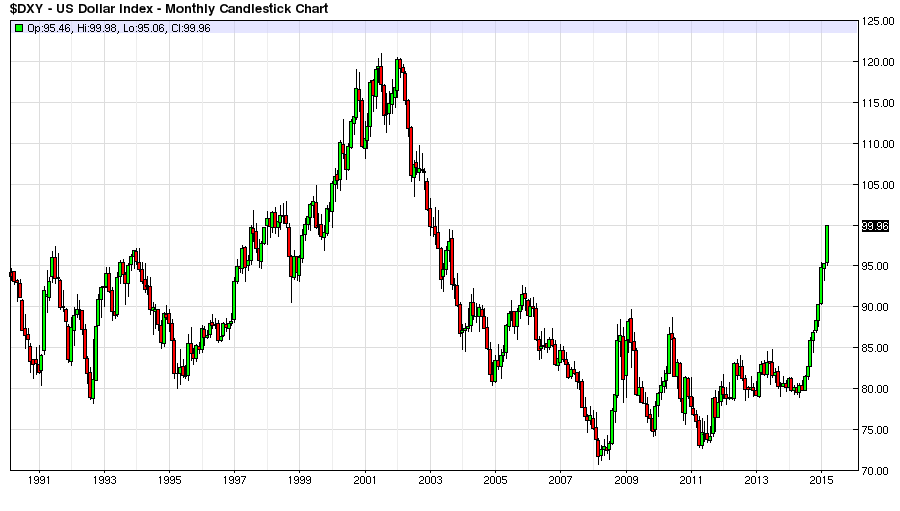 Quit looking at the world as glass half empty, currency crosses fluctuate with global economics and relationships between countries. There is a constant give and take that goes on based upon the business cycles and development stages of the local economies. Having weak and strong currencies serves an economic purpose, and function as natural forces on correcting inefficient and uncompetitive country practices. This is how finance and economics work. Thank goodness the US has finally gotten the upper hand the past couple of years after really taking it on the chin from the BRIC’s when they had their robust economic growth cycle. 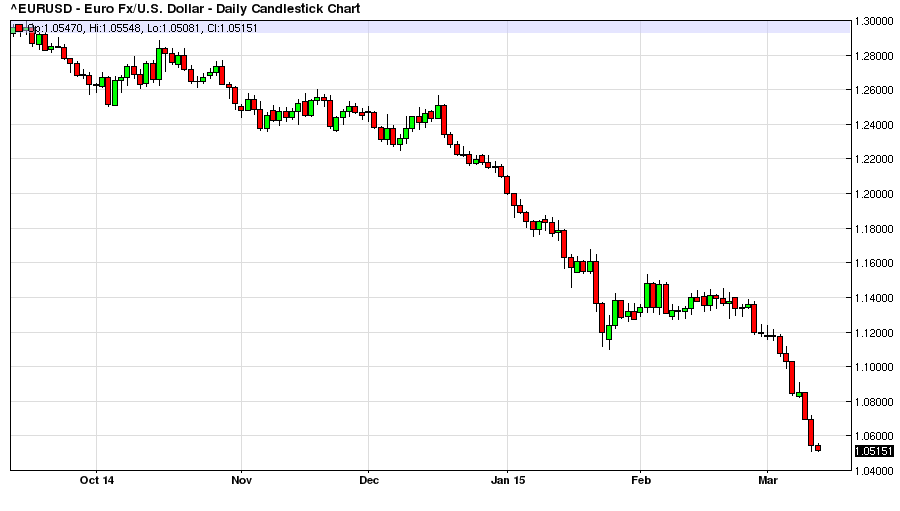 Always Good to be Strong

In short, a strong dollar is good. In this case it is a sign of strength and confidence in the business prospects of the economy, and a vote for capitalistic principles in a globally competitive marketplace. There are many advantages to having a strong US Dollar. It helps attract capital, it lowers overall inflation, while providing stronger purchasing power for US Consumers, making travel more affordable. It is a sign of a robust economy relative to its global peers. I am sure Australia wishes they could time travel back to the glory days of the commodity boom based upon the emerging market parabolic growth phase led by China. They would gladly take a stronger currency, higher rates and all the good benefits that go along with an outperforming economy versus their current state of affairs represented by a much weaker currency, lower interest rates and much weaker business prospects. 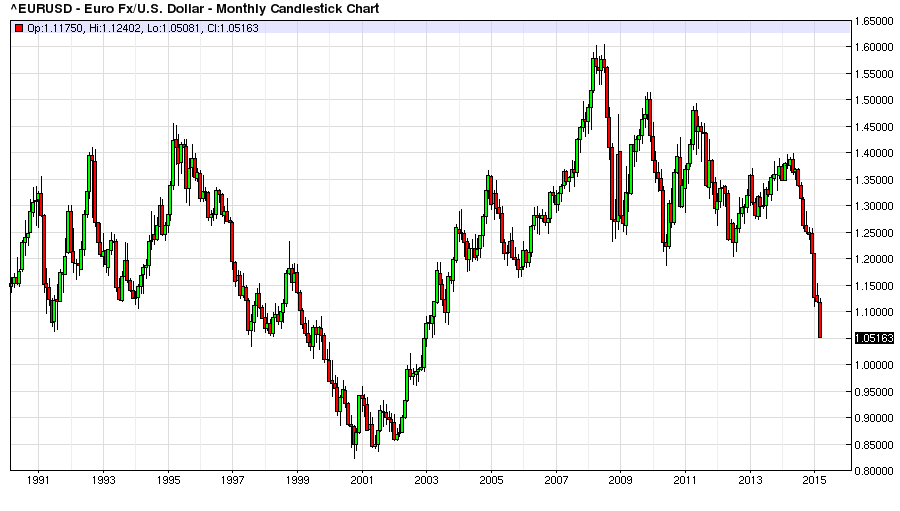 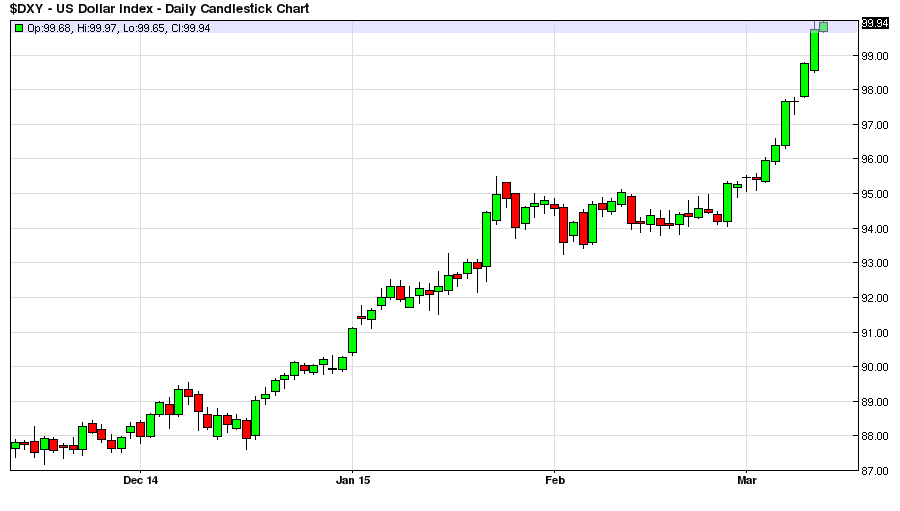 The US should thank its lucky stars investors value the US Dollar, and consider it a good place to invest in relative to our global peers because currencies move in cycles, and trust me this will not always be the case. But the appreciating currency is telling investors the inevitable that a strong US Dollar is indicative of a strong economy and rising rates are already being factored into the appreciation. Wall Street and Global investors don’t wait for the Fed to raise rates, they already are voting via the currency markets that rates are going to rise in the US, and much of these rate hikes are already being priced into the currency. Look at it this way, investors in the currency markets are already miles ahead of the fed front-running their rate hikes. Their analysis is that interest rates are going to rise in the US over the next quarter, and this is part of the tremendous run-up in the US Dollar. Subsequently forget about the ramifications of the Fed raising interest rates on the US Dollar Index, it has already been factored into the market by currency investors. The real news would be if for some reason the Fed didn’t raise rates over the next quarter!

Editor’s note: This was written before the Wednesday FOMC meeting.  Action following the meeting announcement, which had a dovish tone, reinforced the author’s thesis.  With prospects for an immediate rate hike eased the dollar tumbled, the U.S. Dollar Index plummeting 5% before recovering to close down 2.2% for the day.  The 5% reaction was the largest intraday move we could find looking back more than 10 years.  Yes, rate hikes were priced in and when they apparently moved out in time the reaction was violent.

Pumping CO2 Underground can Help Fight Climate Change. Why is It Stuck in Second Gear?