Caution In Order After Surge

We all want to buy our investments at the lowest possible price and sell at the absolute peak. It rarely happens, but we all have different strategies that we hope will get us close. With oil prices just experiencing the largest two-week gain in 17 years, a lot of people are probably looking back and wishing they had put some money down a month or two back when it now looks like oil prices may have hit the bottom.

In fact, the upstream master limited partnerships – those making their money from producing oil and gas – are surging, and now account for nine of the 10 best-performing MLPs so far in February. The only MLP in the top 10 that isn’t an upstream producer is Hi-Crush Partners (NYSE: HCLP), which mines the sand used in hydraulic fracturing. So HCLP’s fortunes are dependent on the fortunes of the upstream producers. Here are the top 10 performances less than 10 days into the month. 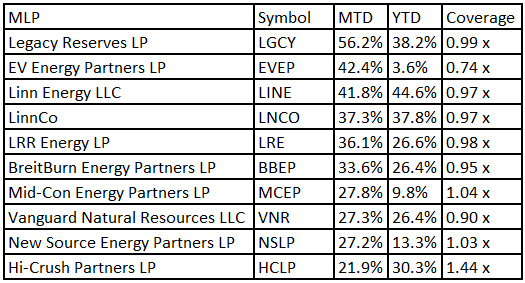 I left yield off of this table on purpose, because most of the upstreams have announced distribution cuts, so a backward looking yield gives a very distorted picture.

Although you may be kicking yourself now, you can be forgiven if you weren’t buying upstream MLPs in the middle of last month, A recent Bloomberg article highlighted the fact that the pros don’t seem to have a clue about where oil prices are headed:

The outlook on oil prices is clear: Oil will crash. Unless prices surge. Definitely one or the other. Crude just had the biggest two-week gain in 17 years, but it’s still about 50 percent cheaper than it was in June. The situation is volatile, and forecasts are all over the place – from $30 a barrel predicted by the president of Goldman Sachs to as high as $200 a barrel seen by the head of OPEC.

Here’s my take on these things. The first rule for dealing with this kind of volatility and uncertainty is to know what kind of investor you are. These upstream MLPs are not for the typical MLP investor. They are extremely volatile, so don’t go chasing this surge if you are a conservative investor dependent on income. Keep in mind that many, if not most of the MLPs that are current surging had losses of more than 50% in the second half of 2014.

Second, be careful who you listen to for investment advice. It is obvious that many analysts simply look at a trend and extrapolate it into the future. Hence, when oil prices fell to $70, they were calling for $60. When crude fell to $50, they were calling for $40. And when oil reached the mid-$40s, some called for $30. (Time will tell if I was correct, but when oil was falling into the mid-$40s, my #1 prediction for 2015 was that it would not reach $40.)

What you won’t find is those timid analysts calling for a steep drop in oil prices last summer when oil was above $100, nor for a reversal in the direction of oil prices as they were plummeting toward $40. As a result, you won’t see too many of these analysts advising you to buy low and sell high. They know that the safest career path is to make predictions in line with those of most other analysts. They keep Buys on many companies deep into declines, and they don’t upgrade the companies until they have already made a strong move up.

To be fair, there is a lot of psychology at play in the markets. But the underlying fundamentals don’t change so drastically as to warrant oil prices bouncing between $50/bbl and $100/bbl (the same idea applies with natural gas). So here’s what I do.

I do not try to make short-term predictions. I doubt those turn out much better than a coin flip in most cases. But what I do believe is that over time the average price of oil will be governed by the fundamentals. Thus, I don’t know what price oil will be in two weeks or in six months, but I have a pretty good idea of what I think the average is likely to be over the next three years. Then my philosophy is to accumulate oil companies and MLPs when the price is below where I think the average price will be, and to lighten up when the price goes above that level.

What is my three-year forecast for the average price for oil? The average over the past three years for West Texas Intermediate was $93.68. I believe the price over the next three years will be substantially below that because we are presently in an excess capacity period, but I also believe the price will be above where it is currently trading. I would put the price at around $70 ± $10 as a three-year average. (I have explained my reasoning in previous columns, including the one in which I predicted that oil prices would not close below $40/bbl.)

Thus, as a long-term investor, under the present conditions I generally accumulate when oil prices fall much below $70 and lighten up when oil prices are much above $70. Of course this is a rule of thumb; each investment will have its own unique set of circumstances. There may be a company that is a screaming buy when oil is at $100/bbl, but your risk at that level is much higher given the present medium-term outlook.

Could I be wrong? Sure, you always have to keep open the possibility that your hypothesis is incorrect, or that it could change with changing market conditions. But you have to have some convictions that guide your investment choices. I told everyone who would listen in January that I could see no way oil could stay below $50 for any length of time. What I would say now is to be very careful after such a quick run-up in price.

If I was investing short-term for a quick buck, the recent move up has a significant risk of stalling out or pulling back in the short-term. For long-term investors, I would still be in an accumulation phase. And for conservative MLP investors, it’s probably a good idea to largely avoid the upstream MLPs.

Upstream MLPs have regained much ground over the last month, but it’s too early to celebrate and too late to buy.

Internet Censorship in China: We’ll Sing it for You

Internet Censorship in China: We’ll Sing it for You