Fed Officials Trying to Send Signals to the Bond Market

James Bullard on Friday noted that the Bond Market was far too dovish in relation to where the Fed is in regard to raising rates in June, and this might be the understatement of the year so far. For example the U.S. 2-Year Bond Yield is 0.45 or 45 basis points, think about this for a moment.

Even if the Fed fund’s rate finishes the year at 50 basis points which is well below the Fed’s most conservative forecasts, and we use a conservative annual inflation rate of 1% (I know oil has dropped but there are more inflation categories than just the energy component). Moreover, the overall annual inflation rate is well above 1% right now, and you factor in that this bond is paying a 2-year risk premium for tying up one’s capital with all kinds of inflation risks over that 2-year time frame, this has to be the stupidest investment of all time. 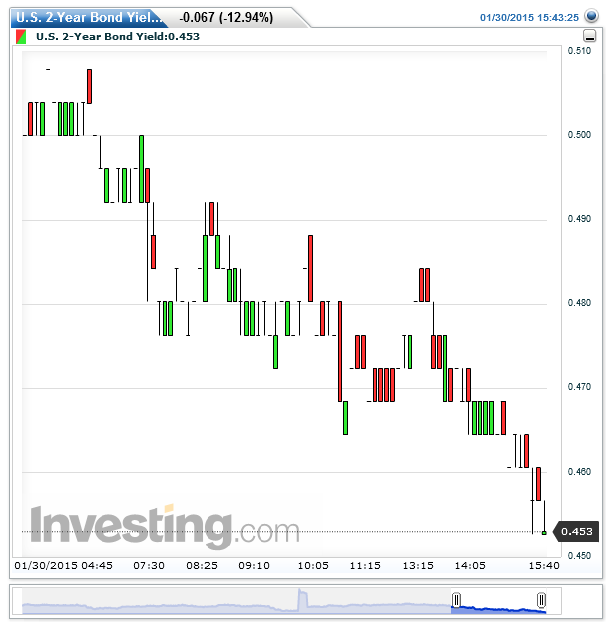 Remember this June rate hike by the Fed has been pretty well telegraphed to market participants, and nothing changed in the latest Fed Statement in fact it became even more hawkish with language changes in the statement released this week. Therefore whether one completely takes out the inflation component leaving a 36 basis point starting point, a 45 basis point yield on the 2-Year is beyond absurd. It is an example of just how much risk taking and froth there is currently in the bond markets due to so much cheap money sloshing around the financial system right now. The only way an investor can make money with a negative real rate of return if you factor in the inflation rate is by using an insane amount of leverage on these very low borrowing costs. Low borrowing costs aren’t enough to make this trade work, it takes huge scale to make this a ‘worthwhile trade’ in a negative real rate scenario that this trade offers up to the risk taker.

Read More: Low Rates and QE are Deflationary at the Zero Bound

Therein lies the problem for the Federal Reserve and Central Banks around the world, they have enticed investors to chase yield at negative real rate scenarios with huge leverage to make such a low yield vehicle trade profitable and worth doing. This is going to cause massive instability to the financial system when this trade ends like we all know it will because the numbers involved are nonsensical to say the least.

Just on Friday one of the most dovish members of the Federal Reserve, San Francisco Federal Reserve Bank President John Williams said the U.S. will see real GDP growth around 3 percent in 2015, and that the unemployment rate will touch 5 percent by the end of the year. Where do traders think that leaves the Fed Funds Rate? The U.S. 2-Year Bond is currently pricing in no rate hike for all of 2015 and 2016, and no inflation whatsoever, in fact a negative rate of inflation over the next two years.

The Tulip Lunacy in the Bond market is just off the charts stupidity at its finest, go ahead and buy the 2-Year Bond this upcoming week, I am sure this Bond will be good in four months when the Fed hikes rates 25 basis points, maybe if you are lucky there is a greater fool than you, but from the stampede that is sure to follow on the exit of this trade at these prices in the bond markets, you better be first!