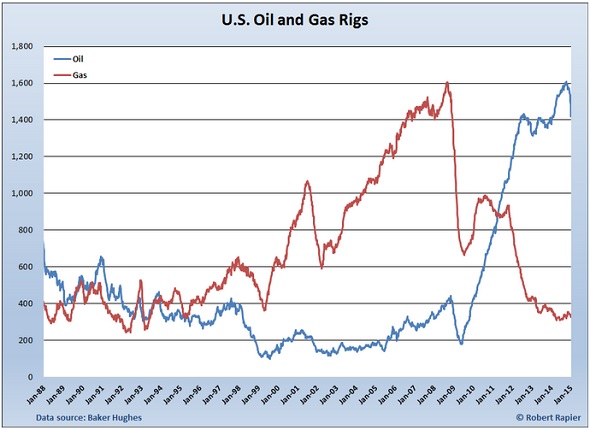 Now that oil and gas prices are down sharply, rig demand is likely to follow. In the near term – which I would consider under two years in this context – low oil and gas prices will result in diminished drilling activity, particularly in more expensive areas. We can already see in the graphic above that the number of rigs drilling for oil has begun to drop recently after peaking at about 1,600 in October.But the decline is more pronounced in some areas. Among the major basins in the U.S., the Permian Basin has by far the most drilling rigs, but it also suffered the sharpest decline in rigs in response to lower oil and gas prices: 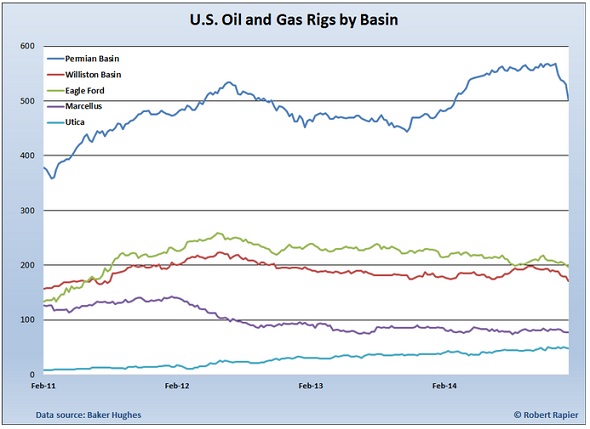 Over the longer term, oil and gas plays that cost more to produce than the expected price of the commodity will simply not be developed, and if they have been developed they could ultimately be idled if lifting costs exceed the profit margin.

A recent Bloomberg story tells us where projects may be cancelled by identifying the breakeven costs in a number of different shale oil plays, with $80/bbl as a reference point: 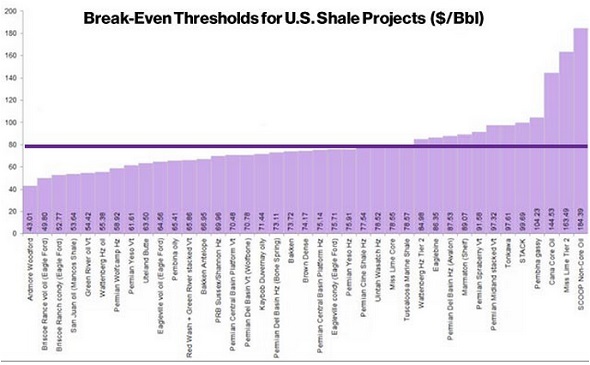 Note the number of areas in the Permian Basin in West Texas and the Bakken Formation in North Dakota that have break even costs above $70/bbl. Thus, it is not surprising that the biggest drops in drilling activity have taken place in these areas. (Note that “Williston Basin” in the graphic above is where the Bakken is located).

In the Bakken, Continental Resources (NYSE: CLR) has been the top oil producer, but Whiting Petroleum (NYSE: WLL) is expected to take over that role following its acquisition of Kodiak Oil and Gas. Oasis Petroleum (NYSE: OAS) is a smaller Bakken pure play that could find itself in financial trouble should oil prices remain low.

The reduction in drilling activity will not entirely stop growth in U.S. oil production in 2015, but if the price of oil remains at the current depressed levels over the next year, in 2016 we are likely to see the first production decline in the U.S. since 2007-2008.

Oil Crash: Is This the End of a Long Period of Inflated Prices?