With more and more utilities trading at premium valuations, now is the time for investors to diversify their portfolios into the sector’s higher-quality names.

That’s my conclusion after attending the Edison Electric Institute Financial Conference last week, an annual event hosted by the association of investor-owned power companies that gives utility CEOs and their investor-relations teams an opportunity to pitch their stocks directly to the investment community.

At the conference, I was struck by the strange indifference among big investors to the risks within the sector.

This complacent attitude is further evidenced by the fact that many utilities’ valuation multiples are converging (See “The Great Convergence in Utility Valuations”), indicating that large fund managers really do not understand the risks in the segment, or have overlooked these risks in a flight to safety.

Indeed, a trader for a multi-billion-dollar fund manager I met with at the conference essentially confirmed this theory, when he observed that large fund managers are blindly buying utility stock indices, with little focus on individual names.

When these funds eventually rebalance their portfolios away from utilities, this will inevitably lead to a shakeout as investors become more selective.

The Great Convergence in Utility Valuations 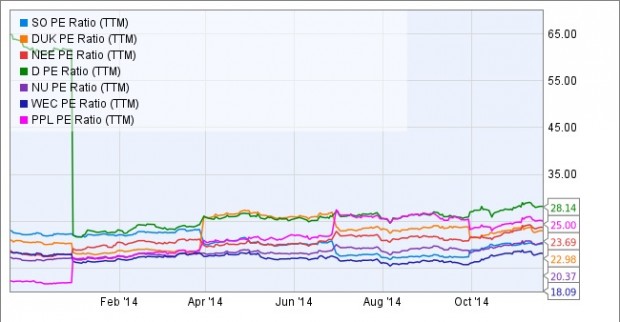 This convergence in valuations has happened before.

In the late 1990s, for instance, a common complaint by utility CEOs was that valuations didn’t take into account whether a company was fully regulated, diversified, or a pure-play merchant operator. It wasn’t until the Enron debacle, the California Crisis and the merchant overbuild that investors began to fully understand the sector’s risks.

This convergence occurred again in 2006. Unfortunately, it was soon followed by the broad market selloff that helped precipitate the Global Financial Crisis.

Thereafter, chastened investors cast a more skeptical eye at these companies and discovered that many utilities had overbuilt during the bubble, and now struggled with tepid power demand in the wake of the downturn, a situation that still persists for many in the industry.

Today, utilities are making big plays into the shale space, as well as into renewables and wires, while others have retail, wholesale or international initiatives. Still others are making new decisions about how much of their business will be regulated.

Each of these plays has varying degrees of risk and reward, and investors must attempt to gauge whether the risk entailed by a particular utility’s strategy fits with their own investment goals.

These strategies are at least partly the result of the industry’s changing business model. And the trends driving this change, such as cheap natural gas, technological disruption, and tighter emissions standards, will continue to evolve.

At the conference, I got the industry’s take on various trends and developments, including impending Republican control of both chambers of Congress.

As I observed shortly after the midterm election, a Republican Congress could change the value proposition of certain utilities.

For instance, if Republicans were to successfully push back on anticipated Environmental Protection Agency (EPA) regulations on carbon emissions, coal-heavy utilities could see a rise in valuations since a lower cost of compliance offers investors greater earnings visibility.

Meanwhile, utilities that have been pursuing a clean-technology strategy could see a decline in their valuations if these investments prove costlier in the absence of EPA regulations.

When I asked Gerard Anderson, CEO of DTE Energy Holding Co (NYSE: DTE), about what the GOP’s control of Congress might mean for utilities, he said that when President Bush took office in 2001, similar assumptions about regulatory rollback pervaded the industry.

A story published then in The New York Times even suggested that a meeting between the EPA and a utility group had ended with the EPA administrator wrapped around the industry’s little finger.

However, Anderson was at that meeting, and he said the reporter’s take on the story couldn’t have been further from the truth. In fact, the reality was quite the opposite: The EPA administrator was laying down the law and telling the utilities he expected compliance with the rules of the day.

Instead, Anderson said that what typically happens is environmental laws are vetted and challenged ad infinitum, but there’s little that any party can do to change them.

The manager of investor relations for Southern Company (NYSE: SO), Jimmy Stewart, basically agreed with him. Stewart said it still might be possible to influence some aspects of the proposed law that would limit emissions, but mainly by changing the details, such as adjusting compliance dates.

One of the best points regarding the EPA’s proposed rules came from Thomas Hamlin, vice president of financial planning and investor relations at Dominion Resources Inc (NYSE: D). He said the new rules are coming so quickly that utilities don’t have the luxury of waiting to see which way the political winds blow.

Over the past few years, many utilities have had to develop multi-year plans to shut down coal plants and build replacements that would meet the EPA’s timeline. And at this point, those plans will have to move forward.

And even companies that have developed renewables or are in the renewables industry do not fear the GOP changeover, despite the fact that Republicans have threatened to roll back renewables subsidies.

James Hughes, CEO of First Solar Inc (NSDQ: FSLR), told me that cutting back subsidies would have less effect on the industry than when it was in its infancy, because the cost of solar has come down so dramatically.

Many analysts say that even without EPA rules the industry will continue its shift toward cleaner natural gas-powered plants given how cheap natural gas has become. Also, building a new coal plant is nearly impossible now as politicians and regulators routinely yield to NIMBY (not in my backyard) sentiment.

In future issues of Utility & Income, we’ll drill down into some of the other topics covered at the conference, including distributed generation, cyber-security, renewables, YieldCos and more, and we’ll analyze how these trends will impact the industry.

Subscribers to Utility Forecaster receive the full update, which lists those utilities best positioned to weather a potential industry shakeout.

Stratfor: Thanksgiving and Puritan Geopolitics in the Americas

From Knowledge Based Economy to Wisdom Society

From Knowledge Based Economy to Wisdom Society