Searching for a Bottom

That may seem like an awfully wide range, but over the past year we have flirted with both ends of it. In June the price of West Texas Intermediate was hovering near $110 a barrel (bbl), while Brent exceeded $115/bbl. On the low end, this past week the price of WTI closed in the upper $70’s/bbl, while Brent fell to the lower $80’s.

The history of the oil industry is one of cycles. Prices fluctuate according to the dynamics of supply and demand. When there is a large differential between available oil and demand for that oil, there is downward pressure on prices. The extent of the pressure is related to the extent of the gap between demand and supply.

Several years ago I created a graphic to show what was happening with oil supply and demand and how that was affecting prices. 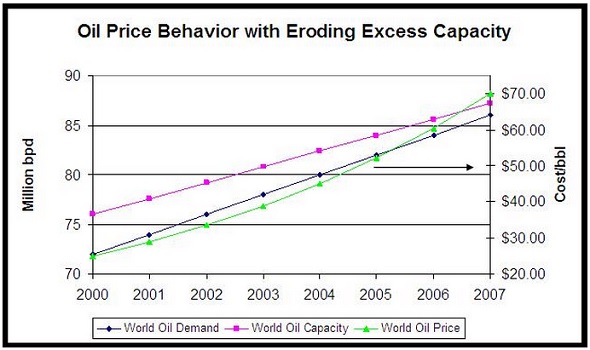 What the graph illustrates is that at the beginning of the last decade, the available oil production capacity around the world was comfortably ahead of global demand. But the price of oil at that time was low, and when prices are low oil companies invest less money in new oil exploration and production.

You have probably heard the saying “The cure for high prices is high prices.” Well, the inverse of that is true as well. When oil prices are low, demand growth is more robust but investment in new capacity lags. This happened over the first half of the previous decade, and so what had been perhaps 5 million barrels per day (bpd) of spare capacity in 2000 had shrunk to maybe 2 million bpd by 2005 as robust demand growth eroded the world’s oil supply cushion.

The rest is history. Not only did this diminishing supply cushion cause the price of oil to rise, but it greatly increased the price volatility. This is because when you have 5 million bpd of spare capacity, loss of 1 or 2 million bpd because of unrest in an oil producing country won’t upset the market all that much because there are still plenty of other suppliers to fill the void. Decrease that supply cushion to 2 million bpd and traders get very nervous when supplies are lost from major oil producing countries like Libya or Nigeria.

But then when the price of oil rises, oil companies spend a lot of money to explore for and produce oil. The higher the price, the greater the spending. High oil prices made shale oil production economical for the first time, but then the resulting shale oil boom led to production growth outstripping demand growth.

So higher prices did what higher prices do – increased investment and boosted oil production (there was a three-year lag between the first oil price spikes of 2004-5 and production growth given the time required to complete a project). But high prices also curbed demand growth, and once more the world began to see its supply cushion expanding. It has taken a bit longer than I expected, but oil prices have finally softened in response.

How far might they fall? In the short term, prices can overcorrect in either direction. Could crude drop to $50/bbl? It could temporarily (although I don’t think it’s likely), but it wouldn’t stay there long. Already companies are announcing reductions in capital expenditures for 2015, and thus begins the first step in setting up the next rise in the price of oil.

Why did I set $70/bbl as the lower limit of the trading range? Because the marginal cost of shale oil is probably around $80/bbl. New spending will slow at that level (as we are already seeing), and that will slow future supply growth, while demand growth is likely to pick up in response to lower prices.

A recent Bloomberg story noted that there is still plenty of money to be made for oil companies at $80/bbl oil, but there are also plays that will be uneconomical to produce above that level. Deepwater exploration can be even costlier and more price-sensitive than shale drilling. Thus, the further oil prices fall, the more capital spending will be cut and the slower future supplies will grow. 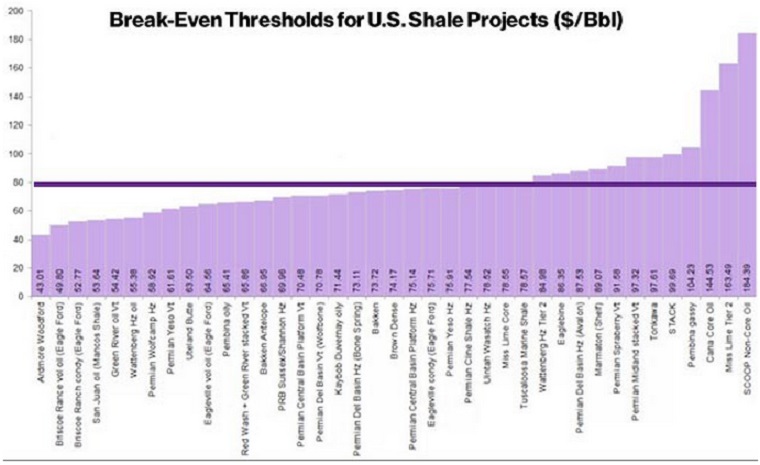 On the other hand, as the graphic above shows, some shale plays have breakeven costs as low as $50/bbl. So there is still plenty of money to be made even at the lower end of my expected range. It largely depends on a given company’s leaseholds.

But what do I think will happen when we break out of that trading range? The same thing that happened after we broke out of the previous range. We will produce all of the easiest shale plays, and prices will rise as those supplies deplete. (On the flip side, the costs of exploiting existing plays are falling as producers climb the shale oil learning curve.)

Just as we have already seen “peak $20/bbl oil,” we will see “peak $70/bbl oil” and then we will see oil prices break to the upside and establish a new range well above the current price. When might that happen? Stay tuned.

Investing in oil and gas producers is all about understanding the cycle and picking your entry points. I still believe that a $70-$120/bbl range for oil over the next few years is likely to hold. As oil rises above $85/bbl I become more conservative in my buys, and the further we fall below $85/bbl the more aggressive I become. Given the current WTI price of ~$78/bbl, I think we are near a bottom. I don’t see a lot of downside from this point. As a result, I think a number of oil producers are looking pretty attractive.

Research: Bankers and the Religious Will Lie for Money

Research: Bankers and the Religious Will Lie for Money