What Could Derail Stocks?

Stocks have rallied back powerfully; the announcement that the Board of Japan would continue its insane policy of spending tomorrow’s money to preserve today’s debt only added fuel to the bull camp.

More weakening of the Japanese Yen today seems to guarantee more turmoil in the far eastern economies, and a wave of deflation from east to west. Albert Edwards describes how the weaker yen and the subsequent of other emerging currencies led to the 1998 Asian crisis.

I know that neither Albert Edwards, or his present presenter, ZeroHedge, has much creditibility among the Bull Herd. But this chart might catch the Bull Herd’s interest.

Keep in mind that FED policy for many years has been to weaken the US Dollar, and, by doing so, to drive up prices (‘inflation is growth’ ideology) of anything priced in US Dollars. QE and ZIRP were designed to bail out US (and global) banks, and also to weaken the US Dollar, to allow bubble building to continue. Bubbles can’t happen in a strong dollar environment.

Developing countries have grown through loans denominated mostly in US Dollars over the past two decades. As dollar strength grows, these loans are going to cost a lot more money to service.

Ilargi Meijer talks about all this in detail at The Automatic Earth.

Below is a monthly chart of the US Dollar (as the UUP, the Bullish Dollar ETF) compared to the OEX, the Standard and Poor 100 Index).  Note the suppression of the UUP as a policy in 2009, with QE and ZIRP.  Note how the UUP (US Dollar strength) and the OEX travel in opposite and adversary paths.

Note that, technically speaking, the UUP has broken through overhead resistance (see bottom pane of chart) and has broken a long-term down channel line. Also note that each point of UUP strength has been accompanied by OEX weakness; and think what a meltdown of emerging currencies will do to the strength of the US Dollar, which will also be buoyed by the end of QE and by higher rates, anticipated to begin in 2015. 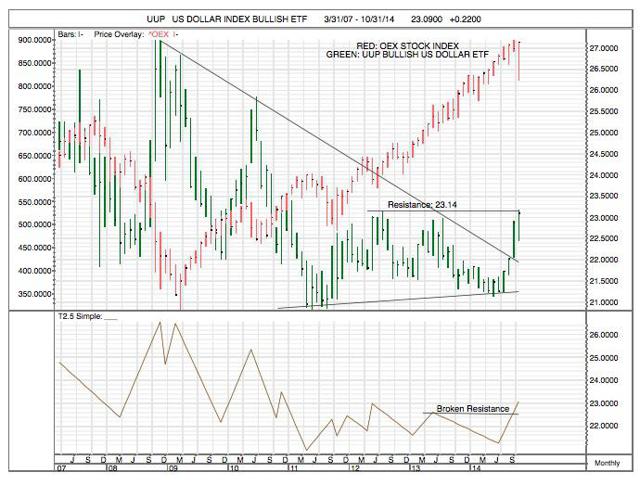 How did UUP react last week to the news of the Japanese desperation for MORE QE?  It went through the roof. 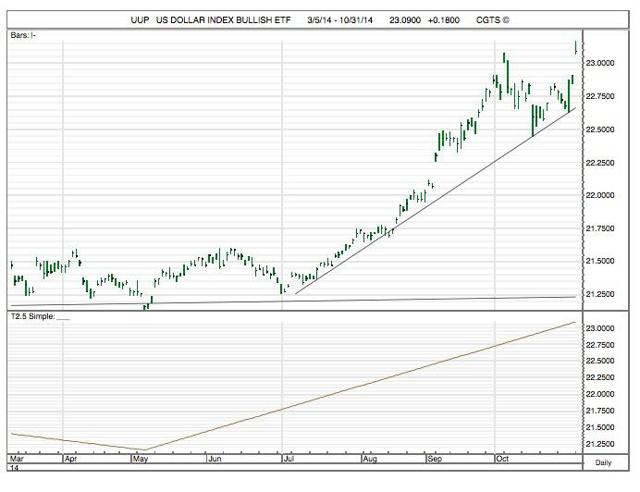 What are the chances that the Euro will be able to defeat the US Dollar in open combat? Not so good. Look at the current USDEUR chart, and see what the surging dollar looks like. The EU is talking about QE of its own, which will, if it happens, send the Euro crashing further. 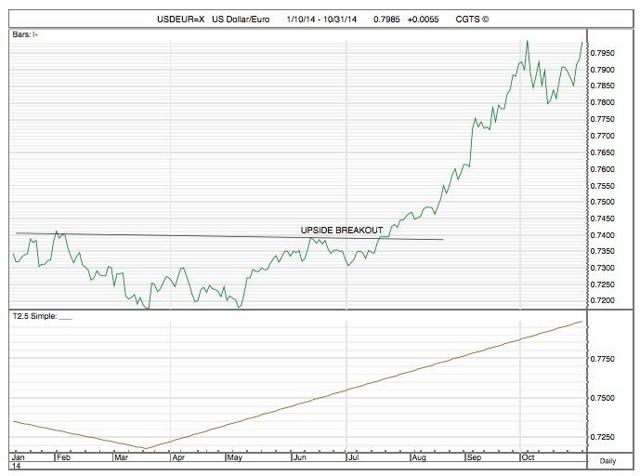 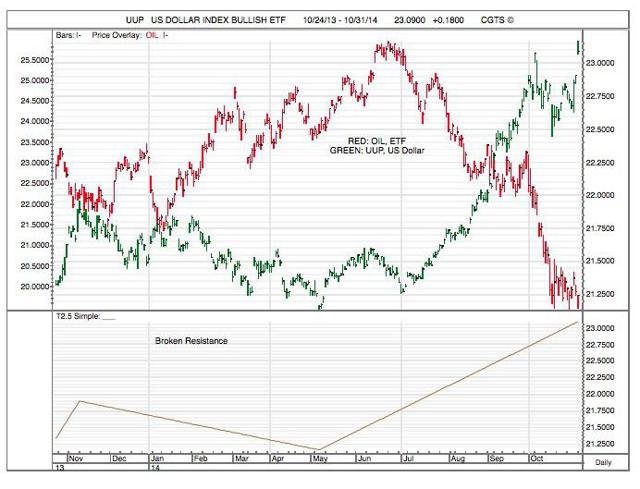 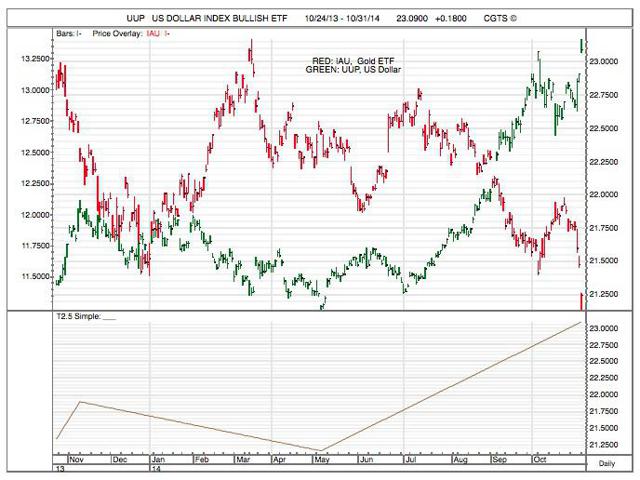 But now this FED policy is beginning to unravel before our eyes. The Dollar is on a roll; and the only thing that can stop it is more US QE, which is anti-dollar at its root. But then there will be other problems. The political problem of the FED giving money from future American tax payers directly to the richest people in the world will not wash for ever. The creation of feudalism in America to benefit the richest 1% of the world and to further the illusuion of economic well-being is losing its political shelf-life.

A stronger dollar is likely to turn the entire world against America, and against the US Dollar as the King of Currencies. But the strong Dollar seems to be organically rolling now, like a plant responding to sunlight.

What can stop stocks from appreciating? A stronger US Dollar seems like the only thing. It is also the only thing that can stop the insanity that has taken over the world — has possessed world leaders to steal money from the future to try to salvage the present which has been stolen by the bankers and the speculators working with ludicrous leveraged debt that has undermined our creation.

There is a moral issue here, lest we forget. Life devoid of the moral issue is already death. Moral death. Being practical is not good enough any longer. There is an evil system angling for time to steal more money from ordinary world citizens — and this evil system is using monetary policy to uproot the world as we know it, for their own benefit. It is called Greed. Greed is a horrible crime, that is punished by the Laws of Nature with the horrors of Hell, Hell being another word for war and civil war.