Have you had a good, long look at the U.S. dollar index lately?

If not, you might want to take a peek:

Remember, a strong dollar puts pressure on commodities like gold and oil. The move we’re seeing above is a short-term commodity crusher. 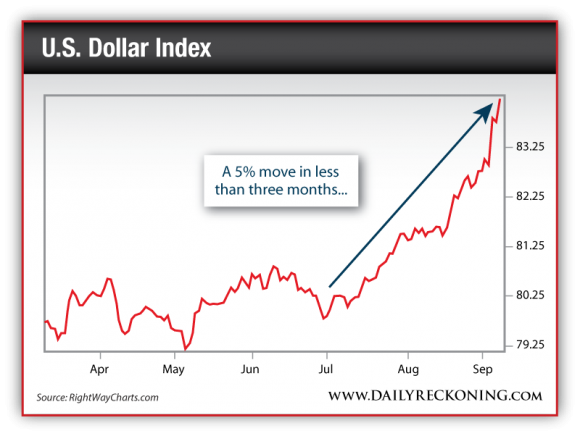 Did America’s shale boom finally move the needle for country and currency?

You see, behind the scenes of the U.S. dollar index is a fairly straightforward equation.

But the currencies aren’t evenly balanced against the dollar. Here’s a look at the current configuration:

Looking at the chart above, you can see that the U.S. dollar index is heavily influenced by the euro – at over 57%.

And although Janet Yellen’s policies and the U.S. trade balance (with burgeoning oil product exports) both influence the overall strength of the dollar, the index itself hinges on the fate of the euro.

And (you can finish my sentence if you like)… the euro is in trouble.

So you see, Janet Yellen may be dancing around taper talk and continuing to overwhelm the market with stimulus and continued low interest rates, BUT if Mario Draghi and the European Central Bank can outdo Janet’s moves, the dollar index can continue to skyrocket.

That’s exactly what we’ve seen since May 2014, after an influential ECB meeting in Brussels. Dollar up. Euro down.

The multicountry currency has been getting hammered over the past few months. And the way I see it, this could just be the tip of the iceberg.

Remember, the euro is a currency experiment.

Could you imagine taking the U.S, Canada, Mexico and 20 other Latin American countries and starting up a universal currency? Let’s call it the “amero.”

Hah! Sharing a currency with just Mexico would be a nightmare.

You see, the amero wouldn’t mean just smooth transactions and common currency denominations. Instead the economies, governments, imports, exports, debts and surpluses would all of a sudden be tied together. So imagine if a Mexican debt crisis threatened all the member economies? Or what if a strong U.S. market hurt Colombia’s export trade? It’d be a tangled web… a mess.

The way I see it, central banks are complex enough. And when you lump 20-some economically different countries under the same currency, you’re asking for trouble. Especially if that geographic area is lacking abundant natural resources (what we consider the backbone of any stable economy.)

Add it all up and the euro is starting to swirl around the bowl, before the proverbial F-L-U-S-H down the toilet.

With the euro heading lower, there are two points we can make.

A lot of well-run U.S. oil companies are on sale these days, but today’s not the day to load up the cart.

First, the U.S. dollar index is currently hitting 14-month highs. The last time we saw the dollar rally this high this fast was July 2013.

I’m not saying the greenback will eclipse that recent high-water mark – but it’s important to keep an eye on a potential green swell.

The key point here is that no matter how grim the outlook from Janet Yellen and the U.S. Fed, the dollar index can continue to head higher.

Which brings us to the second, more important point…

14-month highs for the U.S. dollar have led to 14-month lows for oil prices. The dollar’s strength also puts pressure on the rest of the commodity sector.

With continued trouble with the euro, commodities like gold, silver, oil and more could face stiff headwinds.

For oil prices, as with any commodity downturn, we may be surprised on the downside, too.

A struggling European union, a slowdown in Chinese imports, increased U.S. supply, a lack of meltdown in the Middle East or a strong U.S. dollar could send oil much lower than today’s price.

Getting to the more actionable point, a move like this will come down to timing.

Right now, the oil market is sitting dangerously close to its next drop-off zone. If we fail to hold the mid-$90 range (say, $93-95), we could be in for our next leg lower. Right now, crude trades at $92.

My long-term floor for oil is $85/barrel. When you add up all the buyers and sellers in the crude market, there’s plenty of buying at $85 and not much selling below it (since you start running out of marginal producers). However, that’s more of a long-term price floor. In the short term, seeing oil prices in the $70s is NOT out of the question.

With oil prices heading lower over the past 30-60 days, shale producers have had a headwind. Timing the markets’ next move will be key – and right now, we’re still waiting for a longer-term trend to develop. A lot of well-run U.S. oil companies are on sale these days, but today’s not the day to load up the cart. You should wait for a bottom in shares, before buying.

When you see that bottom there’s going to be a HUGE opportunity on the upside. You’ll definitely want to be positioned properly ahead of time.

Unfortunately, you also need to keep an eye on the European economy.

The European economy and outlook for the euro will have a major effect on dollar and dollar-denominated commodity prices like oil.

Time will tell how low the euro will go. With commodity prices waiting in the wings, we’ll keep an eye across the pond for you.

Taking on the Terrorist Threat in Iraq: The View From Kurdistan

Addressing the Crisis of the Elite

Addressing the Crisis of the Elite