Any power utility executive will tell you that the industry has been burned by unexpected natural gas price spikes a number of times over the past 10 years.

In some cases, regulators refused to allow the utility to pass on the fuel cost to ratepayers, and investors took the hit in the form of lower earnings.

While this does not happen often, when there is widespread consumer outcry over high electric bills as a result of natural gas price spikes, known in the industry as the “French Revolution effect,” the relationship with regulators can become so contentious as to materially undermine the utility’s earnings profile over a period of years.

That’s why recent moves by various utilities to develop shale gas pipelines, buy production assets, or even lock in long-term, low-priced natural gas with producers should put those firms in a more favorable light among investors. These physical risk-management strategies will keep costs low, protect profit margins, and allow for incremental increases in capital projects.

Though federal regulators are not advocating mergers and acquisitions by any means, many in the industry see a potential second electric-natural gas convergence wave that may lead to mergers between natural gas and power entities.

NextEra Energy Inc’s (NYSE: NEE) subsidiary, Florida Power & Light (FPL), offers one recent example of such a move. In June, the utility announced a partnership with PetroQuest Energy Inc to jointly develop up to 38 gas wells in the Woodford Shale region of Oklahoma.

In the accompanying filing, the company said the wells would provide 30 years of physical gas and save the firm $107 million over the well’s lifetime, since the firm will acquire the gas at the cost of production plus transport charges (as opposed to paying market prices).

In conjunction with its shale project, NextEra has proposed a 330-mile natural gas pipeline that would serve the Mid- and South Atlantic region.

In an interview with Energy Risk magazine, Sam Forrest, vice president of energy marketing and trading at FPL, said a similar long-term hedge with derivatives would be impossible. He explained that while FPL hedges its near- to medium-term exposure to natural gas prices, typically over a 12-month to 24-month period, hedging many years into the future would incur significant capital and credit costs. 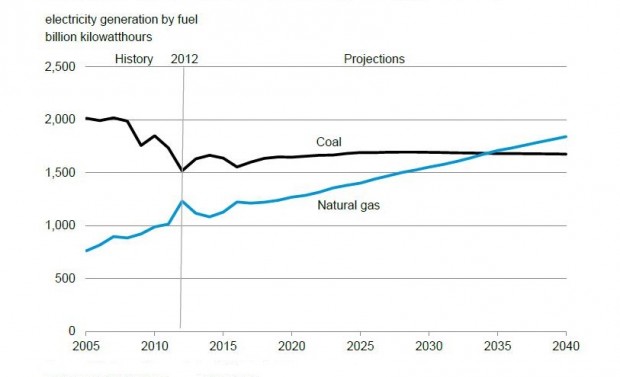 The Writing on the Wall

These strategic moves couldn’t come at a better time.

At last year’s Edison Electric Institute Financial Conference, one of the most poignant questions was posed by IHS CERA consultant Dr. Lawrence J. Makovich. He asked a CEO panel whether utilities were protected from a rise in natural gas prices, given how wrong so-called experts had been in the past about natural gas abundance.

After all, no one can know for sure how natural gas prices will react to increasing resource competition between a growing number of gas-fired power plants, manufacturing plants, and eventual exporters of the commodity.

For now, we believe utilities still have a few more years to secure long-term natural gas resources for their gas-fired plant expansions.

In early September, research firm Raymond James revised its natural gas price forecasts downward. According to the analysts, “The near-term consequences of this huge gas supply growth is that the US should be able to grow supply faster than demand at gas prices of $4.25 or lower throughout the end of the decade.”

That being said, the expansion of the technologies that use natural gas will be tremendous.

Although this trend is still in its early stages, we believe those utilities that are able to diversify their fuel mix and manage their exposure to commodities prices will be best positioned to produce higher future earnings.