10 Year Treasury Short Best Place to be Remainder of 2014

I have been shorting the 10 year Treasury strategically the last 6 months buying the oversold yield conditions right before the employment report ramp up in yields, it has been quite an effective trading strategy this year, and has contributed in part along with some oil and equity trades to being up over 30% versus the overall market returns for both bond and stock investors which we just approximate to the 10% range year to date depending upon exact portfolio mix.

Another Profitable Trade Well I am profitable on this latest move up in 10-year yields, and I expect yields to continue rising through the 10 and 30 year bond auctions later this week, and I expect a strong retail sales number on Friday, and with the all-important FOMC Quarterly Forecast Meeting next Wednesday, I expect yields to run up through this meeting on a slow grind higher. 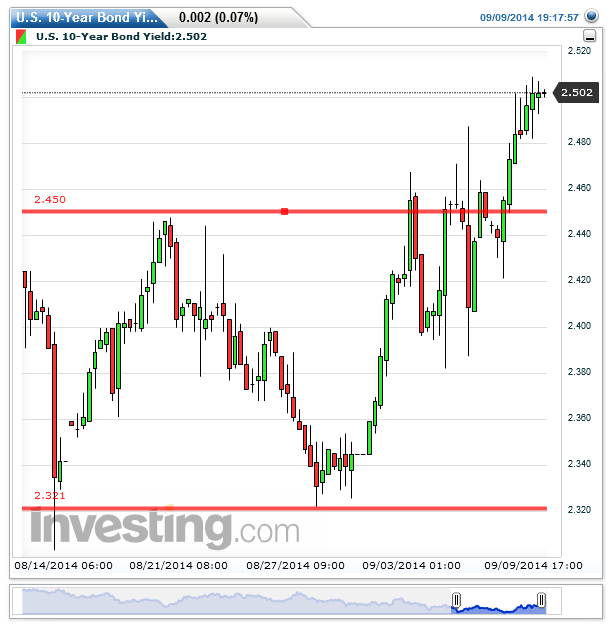 Therefore the question becomes where I close out the trade as I have December expiration 10-year futures contracts, and normally I would close out on a spike before, during or right after the FOMC Meeting. However, when I look around at the market landscape of assets to buy, sell or invest in for the remainder of the year, or in other words if I close out the position where do I go next? And there are just not a lot of appealing alternatives right now! I still view the 10-year Treasury short at least until year end as the best place to park money, as it is all about putting money to work in market places that offer real value, have a catalyst for future upside profit, and the risk reward profile makes sense, and the 10-year Treasury short just makes sense on all accounts. 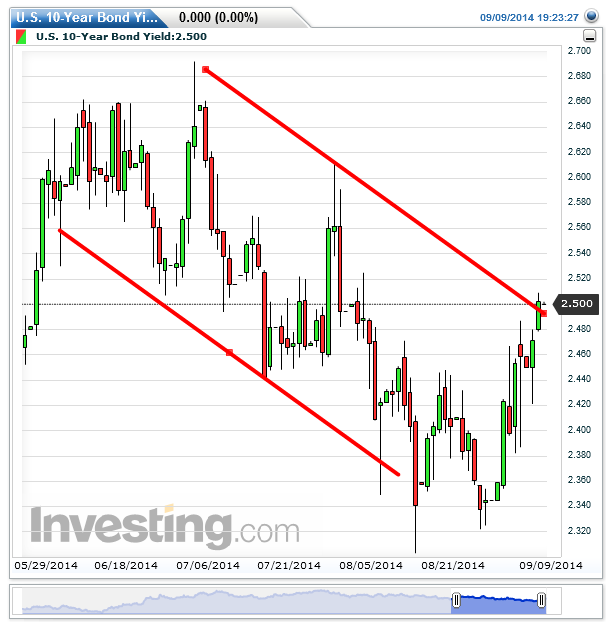 First of all the economy is improving, but even if it just maintained the status quo growth of 2%; bond yields are too low given a 2% rate of inflation, and the Fed Funds Rate shouldn’t be at zero percent, that will have to change, and the Fed recognizes this mismatch, even if we only create 140k new jobs each month, that is still lowering the unemployment rate.

The catalyst is that the Fed is getting out of the bond buying business in October, and they are going to raise rates in 2015. The value proposition is that all bonds from Global European Bonds to US Treasuries are over-valued and mispriced, or in a bubble that the fundamentals cannot possibly sustain. As I said in a previous piece on European Bonds specifically, just park money short every single European Bond or a basket of these bonds, and over a 10 year period you are going to make a good some of money.

All these bond yields are mispriced compared to the risk profile over a 10 year duration period, and since writing that piece other investors who were short have realized a 15 basis point profit in yield appreciation for those same European overpriced bonds. Some of these European Bond Yields are going to double sometime over the next 10 years, they just are poorly aligned with the fundamentals of the balance sheets of these government’s spending patterns! 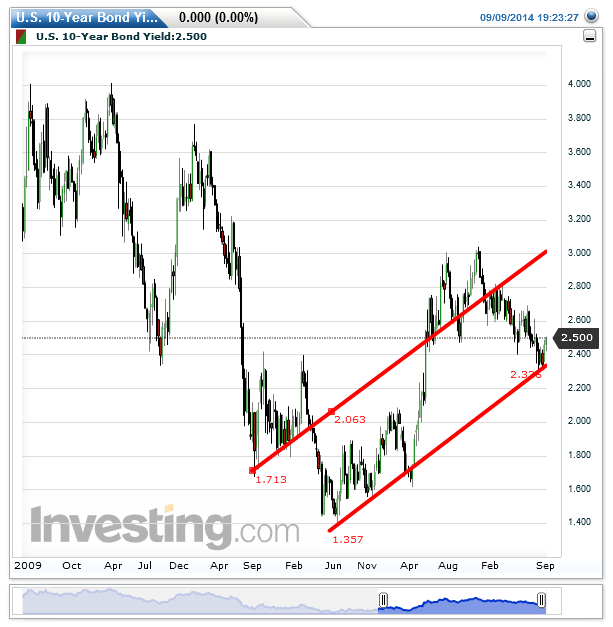 Accordingly the argument that relative to European bonds…..blah, blah, blah….is a complete non-starter for me because those bonds are overvalued by factors of 3 and 4 times, half those peripheral European countries are going to need to be bailed out like Greece in five years’ time. Have you seen their spiraling out of control Debt-to-GDP Ratios of just the last two years? They are headed in the wrong direction without the robust tax generating capabilities like the United States has with an increased budget margin for error luxury due to being the Global leader in many industries from technology, healthcare, energy, agriculture, resources, Research, Education and entertainment. But what other assets represent good setups, I like an Apple short, but I think they are going to have just a blockbuster 4th quarter, and probably two really strong quarters of growth in earnings. After the ‘Big Screen Adoption Cycle’ then I want to come in and short Apple, it is just too early because unlike the last time Apple was at these same lofty price levels, there are fewer shares in the market because of Apple buybacks, and Samsung no longer has a big advantage over Apple in having the best Big Screen Phone.

But if Apple does get near $120 that is when I will start evaluating a short in the stock, but until then I would rather stay short the 10-year Bond. Unless Apple is going to start making electric cars, they are eventually going to run out of new product categories, and become a commoditized supplier of devices with a much lower stock price and market cap….timing is everything in markets. Apple is a short, just not quite yet for the best setup! The Bond Market doesn’t have a Christmas Buying Season to fade as a short does in Apple where every teenager around the world wants the new cool Apple Big Screen Smartphone and 4th quarter earnings are shockingly good!

Gold is a ‘Meh’ Market

What about the Gold market, the current price just is sort of ‘meh’ for me from a valuation standpoint, I don’t want to really buy or sell Gold at these levels. What’s the catalyst for a Gold Short, a sooner than expected rate hike, I would rather be short Bonds! Is Gold such a bargain right here from the Long Side in a rate hiking environment, not really….if inflation takes off as a potential catalyst for Gold to offset the stronger dollar in a rising rate environment, I have two ways to win by being short Bonds versus Gold!

Equities Always Have Some Form of Bid

What about buying or selling equities, I really don’t want to own equities the valuations are too stretched, and although shorts are appealing, only really after new tops have been established, and shorting makes sense as traders take profits after buying the last dip.

There is still an abundance of liquidity even with the BOE & Fed tightening with a dire need of some place to go, and equities seem like they will get the benefit of the doubt on any selloffs over bonds by investors which have to fade not only being in a bubble, but one that is facing interest rate hikes or a tightening Fed!

So what I am saying here is that equities can stay ‘over-valued’ longer than bonds, they can hold in there to some degree during rate hikes, whereas bonds are absolutely going to get slaughtered during the initial adjustment phase of first rate hikes.

Again the best place to be is short bonds, and the front of the curve has already gone up considerably, whereas the 10-year short represents the best value from a “yet to be priced-in rate hike reality’ perspective as a bunch of investors were trying to hide out in this area for as long as possible because of so much liquidity they couldn’t help but gorge themselves on chasing yield up until the last moment which seemed to correspond to the closing out of August as the 10-Year has added roughly 16 basis points in the month of September as traders realized they were way off sides going into the back end of the year with a multitude of Fed rate decisions, strong GDP numbers, and a buy the rumor, sell the news ECB QE Decision on European Bond Purchases! 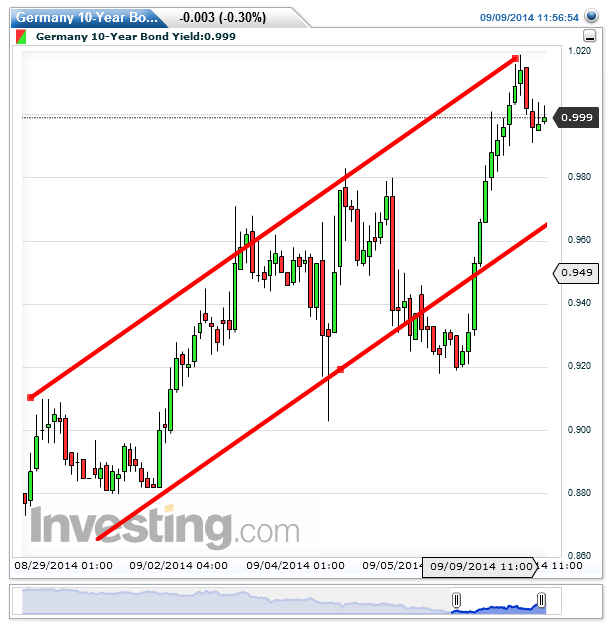 Oil in No Man’s Land

Everything depends on price, but right now when I look around at bargains in financial markets I don’t really see many investment alternatives out there, now if Oil dropped further maybe it could become a bargain 10% lower. However not here I think it is going lower, and it was appealing to short at $107 a barrel for the WTI contract, but not that appealing here at $92 a barrel.

Thus we will see what Janet Yellen says next Wednesday, and where 10-Year yields are after the FOMC Forecast Press Conference. I normally like to take profits on trades, but I really cannot think of a good reason either in better investment alternatives, or the 10-Year yield no longer being mispriced relative to economic conditions that would necessitate me not staying short 10-Year Futures until year end, i.e., the third week in December 2014.

Shoot I might just roll this trade over into 2015 10-Year Futures from the short side if I still evaluate that this yield is mispriced substantially, and I think this is what captured David Tepper’s Trading Sensibility as well. The trade just makes sense on so many levels, and from a risk reward standpoint with the ability to rollover to catch the meat of the move up in yields in a rate hiking environment, it is the best value on the street as the 10-Year heads towards 4% in 2015.

Infographic of the Day: The Indian Film Industry

Infographic of the Day: The Indian Film Industry