For much of the past decade, the biofuels industry in the US grew exponentially. During this period, the US became the world’s leading producer of transportation fuel made from recently harvested plant material, producing about 44% of the world’s biofuels supply in 2013. Brazil was a distant second at 24% of the global total.

The US government has encouraged the use of biofuels since the Energy Tax Act of 1978, which was an exemption for ethanol from the federal excise tax on gasoline. Some sort of tax exemption for ethanol remained in place at varying levels until the end of 2011. This exemption helped slowly grow US ethanol production, which reached 1.6 billion gallons by 2000 and 3.9 billion gallons by 2005.

But the turning point for the US biofuels industry came when Congress mandated ethanol usage in the Energy Policy Act of 2005. The act created the Renewable Fuel Standard (RFS), which required increasing volumes of biofuel to be blended into the nation’s fuel supply.

Congress accelerated the adoption schedule with the Energy Independence and Security Act of 2007. The result was explosive industry growth, particularly in the US corn ethanol industry, from 2005 until 2011. In 2011 some of the tax credits were allowed to expire, but the mandates under the RFS remain in place and will keep ethanol blending above 12 billion gallons per year for the foreseeable future. 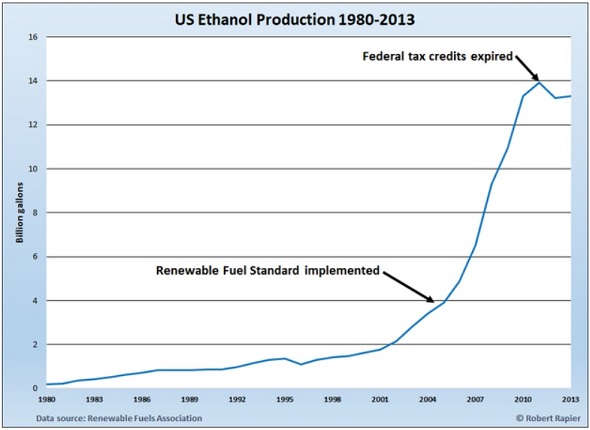 But corn ethanol has long been viewed as an interim and partial solution as the world awaits the commercial development of advanced second-generation biofuels. Unlike corn ethanol and biodiesel, which are made from food crops, advanced biofuels can be made from non-food biomass such as wood chips, farm and forestry residues, or from the biomass fraction of municipal solid waste.

There are a number of options for converting biomass into advanced biofuel. An early contender was cellulosic ethanol. One of the major fractions of plant material is cellulose, which is comprised of long chains of sugars. In 1819, Henri Braconnot, a French chemist, first discovered how to break cellulose chains into individual sugars by treating biomass with sulfuric acid. These sugars could then be fermented to ethanol in similar fashion to corn or sugarcane today.

This technique was used by the Germans to first commercialize cellulosic ethanol from wood in 1898. First commercialization in the US took place in 1910 when the Standard Alcohol Company built a cellulosic ethanol plant in Georgetown, South Carolina to process waste wood from a lumber mill. Standard Alcohol later built a second plant in Fullerton, Louisiana. Each plant produced 5,000 to 7,000 gallons of ethanol per day from wood waste, and both were in production for several years before poor economics forced the plants to close.

A number of companies are currently building demonstration or small-scale commercial cellulosic ethanol facilities. These companies include DuPont (NYSE: DD), Abengoa (NASDAQ: ABGB), and privately-owned POET. These projects have faced delays and cost overruns, and could have a tough time in a market that presently has idle capacity for the production of lower-cost corn ethanol.

However, there are other advanced biofuels options that result in gasoline and diesel as the final products. The market for these so-called drop-in fuels is presently much larger than the market for ethanol, and the current fuel infrastructure is more compatible with these fuels.

One of these routes is called fast pyrolysis, the scientific study of which dates back at least 50 years. Fast pyrolysis occurs when biomass is heated rapidly to about 500° C. At this temperature, the components of the biomass break down in seconds into a pyrolysis oil (often called bio-oil) and char (which resembles charcoal).

The pyrolysis oil that is produced in this process resembles crude oil, but is initially as distinct from hydrocarbons as is grape juice from Chianti. Petroleum, or crude oil, was formed from the remains of ancient microscopic animal and plant life that accumulated on sea floors. Over time, sediments piled up over these remains, and the pressure of the sediments and the heat inside the earth gradually converted them into a complex mixture of chemicals that we know today as petroleum. If petroleum is exposed to high enough temperatures, it can be cracked to natural gas.

These chain lengths are important, and the fact that oxygen is generally not present in these chains is important. Like crude oil, pyrolysis oil is a complex mixture, but whereas crude oil is composed primarily of hydrogen and carbon, the compounds of pyrolysis oil contain a lot of oxygen. These compounds include aldehydes, carboxylic acids (like acetic acid), ketones, alcohols, sugars, and pyrolytic lignin, and their volumetric energy content is far lower than that of petroleum.

In a presentation several years ago, Iowa State Professor Robert C. Brown (with whom I regularly correspond) showed that it takes about 140 pounds of biomass (like wood chips) to produce about 100 pounds of pyrolysis oil, which has a water content of about 20%. This pyrolysis oil then requires 4-5 pounds of hydrogen (almost exclusively produced from natural gas) to produce 30 pounds of gasoline and 8 pounds of diesel. More than 50% of the starting mass is converted to water and carbon dioxide, while another 15% is converted to light gases like methane.

Thus, while the technology has been known for decades and is viewed as promising, there are some substantial hurdles in place that have kept fast pyrolysis from economically competing with crude oil. A 2012 study by the Department of Energy (DOE) estimated the cost of producing gasoline and diesel from pyrolysis oil at that time in a commercial plant (at a scale that still doesn’t exist) of $4.55/gallon. But the DOE projected that over time, the buildout of a number of commercial plants could drive the cost of production down to $2.32 by 2017 as the technology is further refined. The largest cost reductions were assumed to be in the upgrading step. 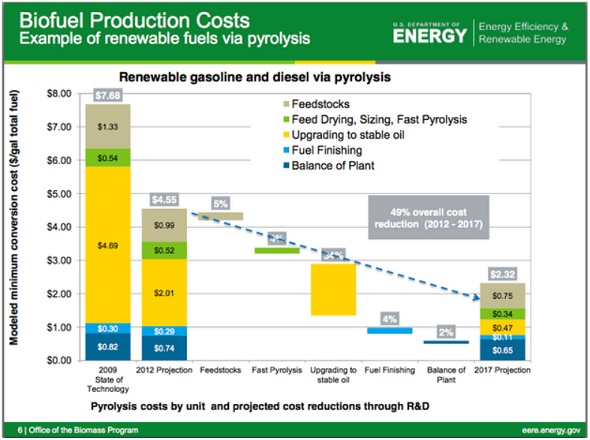 A number of companies have produced pyrolysis oil for years. Canadian firm Ensyn has been producing pyrolysis oil commercially for 25 years. UOP — a subsidiary of Honeywell (NYSE: HON) and a major supplier of upgrading technology and equipment for oil refiners — has developed technology for upgrading pyrolysis oil into hydrocarbon fuels. In 2008 UOP formed a partnership with Ensyn called Envergent Technologies to commercialize the biomass to pyrolysis oil to drop-in fuels pathway.

Commercialization all the way to gasoline and diesel remains elusive however. One company that has attempted to commercialize a variant of the fast pyrolysis/upgrading pathway is KiOR (Nasdaq: KIOR), a biofuel company that famed venture capitalist Vinod Khosla took public in 2011.

Despite the theoretical promise of the pathway, and despite counting Bill Gates among its investors, KiOR has struggled and is on the cusp of bankruptcy. The share price has fallen more than 99% since its IPO. In next week’s follow-up article, I will take a deeper dive into what happened with KiOR, and discuss the lessons for investors from KiOR’s experience.

Despite optimistic federal mandates that required the addition of advanced biofuels to the fuel supply, commercialization has been slow to develop. Ethanol produced from cellulose was initially envisioned as a likely candidate for making a major contribution to the mandates, but project delays, overruns, and bankruptcy in the case of the first company to produce a qualifying batch of cellulosic ethanol have all tempered the initial enthusiasm. A different pathway called fast pyrolysis that results in drop-in fuels as the final product after upgrading has emerged as a contender, but this pathway has also struggled to gain a foothold.

In next week’s Energy Letter, I will review the journey of one company attempting to make advanced drop-in fuels, and answer the question of whether this seemingly promising sector of the energy business has any attractive prospects for investors.