Avoiding the Madness of Crowds

The general market selloff at the end of July seemed be driven by multiple factors, none of which appeared to be related. Some investors sold because of geopolitical risks in Ukraine and Iraq, others on worries of a potential market correction, and yet others on fears of rising inflation in the US economy.

But the one thing these divergent rationales all have in common is that they’re largely based on external factors that have little to no bearing on actual fundamentals.

Certainly, income investors can be forgiven for feeling a little anxious about the market. After all, the S&P 500 and Dow Jones Industrial Average are still at lofty valuations, even after July’s modest correction.

Even former Federal Reserve Chairman Alan Greenspan has added his voice to the growing chorus of those worried that a significant market correction could be imminent.

“The stock market has recovered so sharply for so long, you have to assume somewhere along the line we will get a significant correction,” said Greenspan in a Bloomberg interview in late July, though he stopped short of predicting the market’s top.

Furthermore, whatever the reasons, the reality is that US stocks did end July with a more than 300-point selloff on the Dow, which snapped a five-month winning streak for the broad market. And utilities indexes slid more than twice as much as the S&P 500 at various points last month, but have since recovered much ground (See Chart A).

Chart A: Utilities Indexes Are Trailing the S&P 500 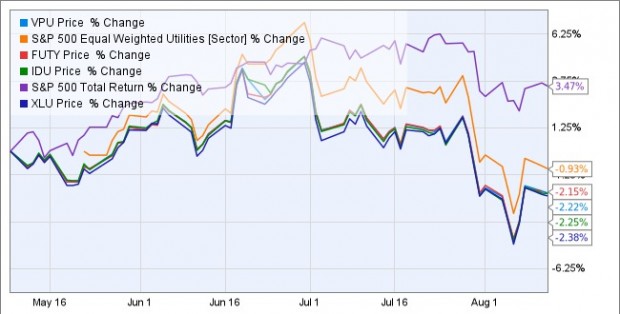 It’s not completely clear why the selloff in the utilities sector happened. Some market forecasters believe it was a massive rotation out of some non-performing exchange-traded funds (ETF) into others.

Meanwhile, the Federal Reserve has dispelled the notion that rates will rise anytime soon. Federal Reserve Chair Janet Yellen has said that despite recent positive economic news, the slack in the job market (many of the jobs being created pay less, and the participation rate remains low) means that the central bank will remain accommodative for some time.

And even with the second quarter’s stellar gross domestic product (GDP) growth of 4 percent, the 2.1 percent contraction during the first quarter means economists project the economy will grow by just 2 percent for the full year, based on estimates aggregated by Bloomberg. And that’s only if the economy expands by 3 percent in both the third and fourth quarters.

One of the critiques of last quarter’s strong GDP number is that it was largely a result of inventory buildup, which is a trend that could easily be reversed. At the same time, an increase in consumer spending also contributed substantially to the economy’s performance during the second quarter.

Still, we’ve been here before. Investors confronted a similar scenario just last summer, when utility and emerging markets stocks sold off as the Fed announced it was planning to taper its extraordinary stimulus.

But like Yellen, former Fed Chairman Ben Bernanke went to great efforts to ensure investors that the central bank would not be raising rates anytime soon. And eventually, investors did indeed return to utility stocks and emerging markets to tap solid income and higher growth, respectively.

In this environment, dividend-paying utility stocks still offer the ideal refuge for investors seeking safety from short-term market gyrations, since their underlying businesses are largely regulated and therefore insulated from such external factors. And beyond utilities, there are industry sectors around the world that are also less sensitive to geopolitical risks.

But as markets become more volatile, a new approach to valuation is necessary to discover undervalued income opportunities.

Many investment analysts use comparable company analyses, or “comps,” to value a company by comparing its valuation multiples to those of its peers. The basic idea is that companies with similar characteristics should trade at similar multiples, all other things being equal.

But when valuations rise higher and higher, as we are seeing now, this analysis ends up comparing one expensively priced equity to another, completely untethered from the fundamentals.

And when using more detailed techniques, such as discounted cash flow (DCF) analysis, the issue becomes that the analysis is reliant on company disclosures.

Given the shortcomings of these approaches, I’ve developed a new analytical tool that will help us evaluate whether dividend stocks are bargains or overpriced.

In fact, we’ll not only be using this system in Utility Forecaster, it will also form the core of my new income-oriented service, Global Income Edge, which just launched.

So how about a peek under the hood?

The system I’ve developed is a hybrid of the famed Gordon growth model (GGM), a variation on the commonly used version of the dividend discount model (DDM).

The model is named after finance professor Myron Gordon and first appeared in his article “Dividends, Earnings and Stock Prices,” which was published in the 1959 edition of Review of Economics and Statistics.

The GGM is mainly applied to value mature companies that are expected to grow at the same rate forever. The Gordon growth model, like other types of dividend discount models, begins with the assumption that the value of a stock is equal to the sum of its future stream of discounted dividends.

While every model has some shortcomings, one can apply new techniques that include multi-growth and discounted free cash flow to equity approaches to make the model more accurate.

And what we like best about this model is that it provides an intrinsic company valuation rather than an extrinsic, or comparables approach, which is at a high risk of being flawed given the bubbly nature of markets today.

Income investors interested in global diversification should check out my new service, Global Income Edge, for which I’ve developed an income portfolio based on this new mode of analysis.

The Shifting Source of New Business Establishments and New Jobs

Another Crisis of Confidence in the Dollar is Coming

Another Crisis of Confidence in the Dollar is Coming