The summer of 2007 was a great moment. We were enjoying one of the strongest booms in both the debt and equity markets that any of us had experienced in our lifetimes. Just the sort of markets we’ve been enjoying for the past year or so. The leveraged lending markets have fully recovered from their low point following the market crash of 2008 and 2009 and volume reached a new high in 2013. While market activity declined slightly in the first half of 2014 from the prior year, current activity levels remain very high. 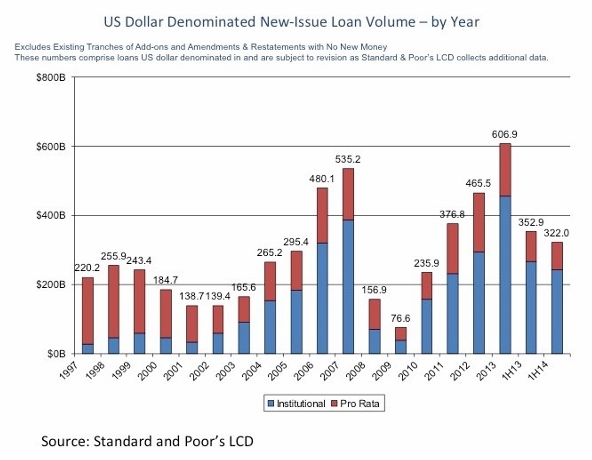 The question of the day: Are we, like Bill Murray in Groundhog Day, destined to endlessly repeat this cycle with limited ability to prevent a repeat of the disaster that befell us in 2008-2009.

We’ve just interviewed one of the world’s leading authorities on the private debt markets to help us better understand the current state of the debt markets and what this portends for the level of deal activity going forward. Randy Schwimmer was a pioneer in developing middle market loan syndication markets in the 1980s, leading the effort for what is now J.P. Morgan and later BNP Paribas. With a small group of partners he formed Churchill Financial in 2007. They were successful in raising a $1.2 billion loan fund before the financial crash closed the markets and were left with more than $500 million of dry powder after the crash. Leveraging this success, they were acquired by Carlyle in 2011 where they began building that firm’s private debt business.

Randy has now left Carlyle to restart his weekly publication covering the private debt markets, which is now called The Lead Left. This has been a must read for years for anyone who wants to understand this arcane and somewhat opaque, but critically important, world. Randy has extensive access to all the players in the debt markets and is in a unique position to answer the question now on everyone’s mind – Are we in another bubble that will come to no good end?

In the interview Randy has provided us with a fascinating overview of the events that led up to the collapse of the leveraged lending market in the 2008-2009 time frame. He also covers some of the significant differences between then and now. In short Randy believes that there is far less short term leverage in the market today than there was in 2007, with many of the investors having arranged funding lines that go out as long as ten years. The presence of longer term money in the market could have very beneficial effects in terms of avoiding a repeat of 2007. However, that’s a far cry from saying there will be no debt market correction as Randy shares in the interview:

I’ve been focusing on that very question, which is – “1. Do you see a correction coming?” and “2. How will it happen?” The answer is almost unanimously, that people view, smart money views, us coming up to a point in the not too distant future when there will be a correction. Number two, they believe it will come, probably, from exogenous factors; so, not related to the economy, not related to specific liquidity within the system, but some kind of geopolitical risk.

Open up the pages of the Journal or the Times over the past couple of weeks and you’ll see plenty of such risk out there. Where it comes from, nobody really knows. That’s the daunting thing about predictions: you can never tell where the risk is coming from. But, the general investor sentiment is that when it comes, there will be opportunity for patient capital, just as there was in ’08-’09 – we remember those days when people picked themselves up and dusted themselves off and realized that there were a tremendous amount of investments available. You may remember Warren Buffett investing significant amounts of capital in Goldman and in some other major investments that he made and he’s known as America’s premier investor – he gets in when other people are getting out – and I think people learned a lot from that lesson: so smart money wants to be prepared when the music stops and have the ability to pick up after everyone’s left the party.

Editor’s Note: This is the first of a series of articles from John Slater that will cover the intersection of the private debt markets, private equity and the deals business. John Slater and the Capital Financing team at FOCUS Investment Banking are active in placing private debt capital for both operating companies and alternative finance companies.

Time Has Come To Bury Caesar