The Bottom Is In For Treasuries

It occurred Friday morning while most traders were asleep in illiquid markets where the 10-Year was forced down to basically 2.35% in Yield first on Ukraine worries over the Russian buildup of troops on the Ukrainian border, and then on the announcement that the US would provide air strikes in Iraq to stem ISIS aggression. 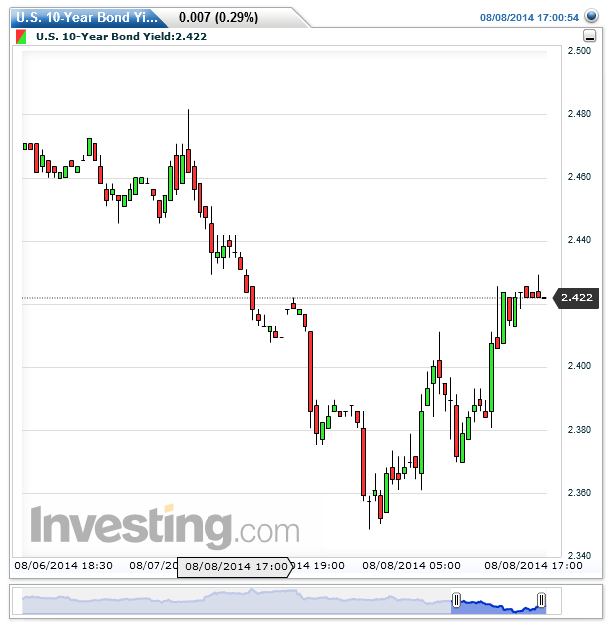 It should be noted that the US economic data was actuallyvery positive for the week overall with some really stellar numbers in Factory Orders, ISM Non-Mfg. Index, Productivity and Jobless Claims. Moreover, exports out of China were very bullish as well with figures released by the General Administration of Customs showing exports expanded 14.5% year-over-year, nearly double the 8% growth forecast by economists.

The only reason markets didn’t embrace this good news was all the worry that Russia was going to invade Ukraine, well after tit for tatsanctions, and the realization that everyone is going to be worse off as a result of Russia escalating Ukraine, on Friday Russia sent a couple of messages to markets that it is ready to de-escalate the situation in Ukraine with a withdrawing of the troops on the border, and working on a negotiated settlement between Ukraine and the Separatists.

Markets rebounded off the lows, and bonds sold off first on the market overreaction to the limited air support in Iraq and the initial good news out of Russia in the morning, but still it was Friday going into a weekend, so investors were still cautiously optimistic. But the late afternoon news regarding Russian withdrawing troops reconfirmed to markets that Putin wanted to truly deescalate the conflict in Ukraine after what had been a contentious heating up of the Rhetoric in recent days.

Bottom for the Year

I am calling it right here, that was the bottom in 10-Year yields for the year, it took the threat of a full out Russian invasion, and the world is coming to an end mentality by the always negative media who overreact to any potential news story to bolster hysteria, Doom and Gloom Scenarios, and bump up ratings all in an effort to make more advertising money.

The Sun Continues to Rise

But alas the world is not coming to an end; there is too much money to be made by working together for the key parties to screw things up too bad. Russia, Europe and the US recognizes that as a Global community politics will often push the envelope, but nobody is stupid enough to go over the edge as all power brokers slit their own respective throats. There will be political posturing, blustering, but in the end negotiations will take place, deals will be made because the big players stand to lose much more, i.e., everyone will be worse off if politics start trumping economics on the real important matters. If Russia starts sliding economically into the abyss, Putin will be gone faster than he can say separatists’ Independence. Europe is already grumbling about the sanctions which are less than two weeks old, and President Obama is in no position to sink the US economy now that it has finally gathered some steam.

In short, nobody wants political events to interfere with economic progress in any of the countries involved, what this is about ultimately is money, and once parties realize that they will all lose too much money, de-escalation was always going to be the outcome in an inextricably linked global economy with the big players of Russia, Europe and the United States. And this week things ratcheted up, the players weighed the enormous costs of escalation, and behind the scenes negotiations occurred leading to the inevitable pulling back from the brink of economic disaster, now the fences will slowly be mended with further economic deals. In the end, it really is all about money, political stubbornness can be negotiated away with enough economic incentives or negative economic consequences faced by the really big economic countries.

However, many market participants realize this and much of the market movements were just an excuse to push markets where they wanted them to go anyways, a 5% pullback in equities, and one more new low in bond yields before the end of the year ramp up in yields. Don’t get fooled by moves in markets, especially in sleepy august, watch where markets close for the year.

Price Determined Once Positions Closed Out

Remember all these idiots who bought bonds thinking the world was coming to an end, now have to sell a whole boatload of bonds coming to the strongest part of the economic cycle in a given year. It’s where bonds close the year that matter, moves will be made in markets but ultimate price isn’t determined until positions are closed out, watch where bond yields are going into September’s key FOMC Meeting, as I expect they will be 20 basis points higher than Friday’s close. Then watch where they go once QE officiallyends in October, No more Fed intervention in the Bond market to front run, then we will start to see some normalized price action on good economic news like more jobs created on an annual basis in the US economy since 1997. Where will bond yields be when the Bank of England raises rates in the next five months?

And forget about a European Bond Buying Program, it ain’t happening folks as the German 2-year borders on negative, the peripheral yields are equal to the US, and the German 10-year is at 1%, they don’t need to buy bonds as they are already at ridiculously low levels – Draghi realizes this as that trade has already been front run for years. Expect European yields to rise as well with the US and Britain Yields this fall, the low yields have never been about the economy in Europe, Europe’s economy has been in the toilet for decades with much higher yields, it is about making money off of cheap low interest rates and nothing more – and that trade is nearing its end. 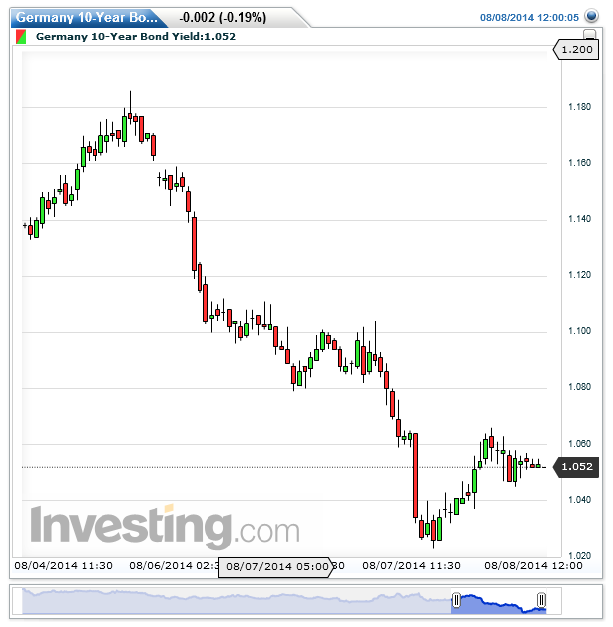 As soon as US and British rates rise just watch all the sudden as German 10-year yields start heading back to 1.5%, the bond markets are basically scams these days, and just watch when the US 10-year rises on good economic news magically the German 10-year yield rises as well when the news has absolutely nothing to do with Germany on a short-term economic basis. It is all about making money, and the global bond market is one of the most rigged and interconnected scams of any financial market these days. Why do you think the big banks can so easily afford to pay ’17 Billion Dollar fines’ like it’s just the cost of doing business? That is because these fines are just ‘Tax Shakedowns’ for all the free money that has enabled all of these players access to unlimited free money to pursue Yield Carry Trades to get their balance sheets in order! 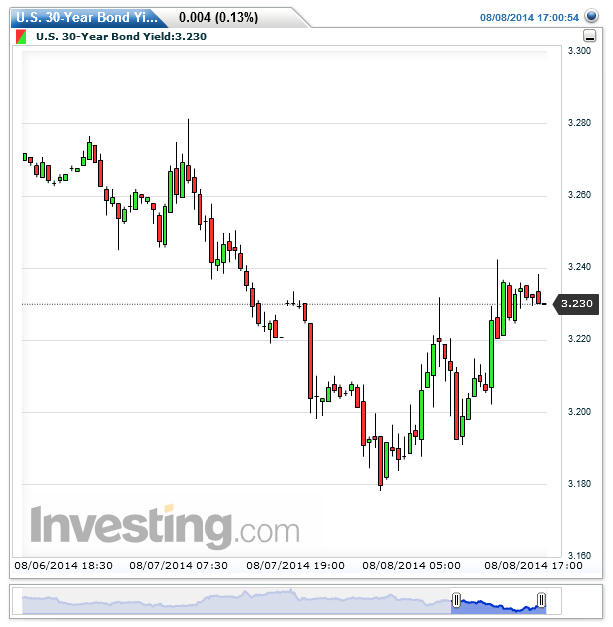 The ridiculously low yields on a global basis is pure and simple a manifestation of zero bound interest rates, as global economies have been in outright recessions and never had these ridiculously low yields, well that party is ending in the United States and Britain in less than six months. And watch how although this has nothing to do with European Rates, but sure enough The German 10-Year will rise alongside the US and British 10-Year Bond Yields in the scam market that is global bonds these days like Europe’s economy is magically changed. Let me restate this as so many get this idea confused, Bond Yields having nothing to do with the health of economies with QE Intervention & Zero Bound Borrowing Costs! Europe can and has been in a recession, a deflationary environment, even world wars with much higher yields on bonds! When countries start coming out with 50 and 100 year bonds to take advantage of ‘unusually low’ rates, that is a sure sign of a global bond bubble! There is a reason these countries want to lock in these rates, because they realize interest rates are not going to stay this low very much longer given a healthy historical context.

So if you were scared that the world was coming to an end this past week you missed a chance to get in good position like the savvy players who if you read the commitment of trading reports loaded up on a bunch of 10-Year Bond Futures shorts during the heat of the market dislocation. The worst case scenario is that Russia invades Ukraine, but it doesn’t matter in the overall scheme of things as the US is not going to war with Russia, the US is not sending massive troops to fight on the ground in Iraq, and the US economy is still going to produce 200k jobs a month, grow at 2.5-3%, QE is still ending in October, and interest rates will be raised in 2015! This is what matters in the overall scope of things, and why this latest market turmoil represented a nice positioning opportunity for sophisticated traders in the bond market. Bond yields are going higher because the Macro Economic Catalysts far outweigh the Micro Geo-Political news events. It is the difference between playing chess and checkers in financial markets, the checkers players look at the news at face value, and the chess players are looking at the latest news in context of the thirteen moves ahead which are ultimately going to drive markets and determine price. Just like when Gold was summarily taken out to the woodshed around the $1080 an ounce level last year, look where the Gold market finished when those positions ( in that case shorts) were closed out! It isn’t market movements that count near as much as where markets reside after the same positions used to move markets are closed out, expect a whole lot of bond selling, and long bond positions to be closed out by year end.

Expect the 10-Year Yield to close the year out at least in the 3% range, and moving substantially higher in 2015. We will literally have a 25 basis point Bond move in a week in the 10-year before this year closes the books. All those who bought a boatload of bonds right at the change of monetary policy, literally 4 weeks away, are going to be stuck unloading bonds in an escalating yield environment where they have no pricing power, they literally are selling into a market with no buyers and only sellers, good luck with getting any kind of ‘reasonable’ price on those bonds.

Any Bond Idiot Can Buy into Fear, but they are Forced to Sell into ‘Good Times’!

This is going to be a one-sided stampede in bonds where there is not a chance of ‘algoing’ out of positions, sellers will have to take whatever price they can get, and it is under these conditions that we will see where bond yields close the year. Any Bond idiot can buy into fear, but they have to liquidate in the absence of fear, and improving economic conditions with an end to QE, and a rising rate environment! How does the old adage go? Bulls make money, Bears make money, and Bond Pigs get slaughtered! There will be a whole bunch of Greedy Bond Pigs who got fat and happy at the Yield Trough hoping for a Doomsday Scenario to save them from their own stupidity as the market forces them out of positions as we close out 2014! Football season is upon us, Labor Day is just around the corner, and the September FOMC Quarterly Meeting where Janet Yellen drops the proverbial Interest-Rate Bomb on financial markets marking the Interest Rate Hiking Cycle for 2015.

American Tourists Spend the Most on British Shores