The verdict of consumers has been consistent for the past 16 years. Thumbs down. That matches the decline in real median household income and living standards that most Americans have experienced over that period. It represents the long term decay of the US economy, an economy that is increasingly structured to benefit only the few at the top while leaving more and more Americans behind.

These trends have been promoted by the Fed’s policies of ZIRP and QE. The benefits of these policies accrue entirely to bankers, hedge fund operators, and corporate executives who order buybacks of their company’s stock to buy the stock options they granted to themselves. They shrink their companies, lay off workers, increase the pool of unemployed and underemployed workers and pressure labor market rates lower in the process. These parasitic policies will, if allowed to play out indefinitely, eventually kill the host-the US economy. The long term consumer sentiment trend clearly reflects the results of current policy.

Consumer sentiment has also had a pattern of more pronounced shorter term declines as the US stock market topped out in 2000 and 2007. This chart from Briefing.com illustrates both the long term decline and the negative divergences that have developed at the last two major stock market tops. 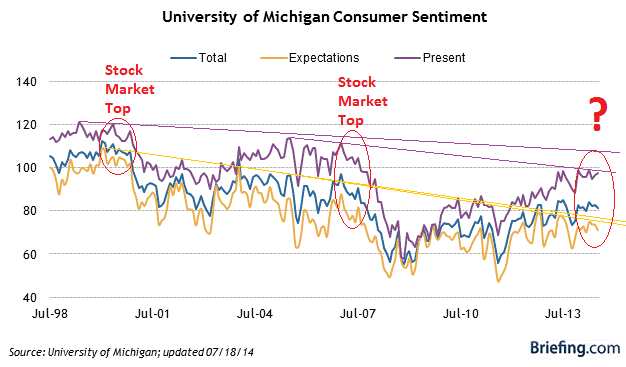 Both the Michigan/Reuters measure and the Conference Board’s measure consist of a couple of useful component indicators which reflect consumer attitudes about current conditions and their feelings about the future, which are then amalgamated into a meaningless composite for headline consumption. I like to focus particularly on the present conditions component because consumers are quite capable of evaluating how things are going right now. Like the rest of us, their predictions about the future are suspect, but the expectations index has also had a knack of foreshadowing major stock market declines. In addition pessimism about the future has persisted for 16 years a clear reflection of the reality of life for most Americans.

While the long term trends clearly depict the steady deterioration in the “American way” of life, I’m more interested in those year long negative divergences that have marked the last two major tops.

Both the present conditions and expectations indexes reached the long term downtrend lines in late 2012. In spite of stock prices going on a massive run since then, consumer sentiment has not broken out in similar fashion. It has remained below the long term trendlines. This shows that the stock market bubble is benefiting only the privileged few. Economic gains are not accruing to the majority.

As a technical analyst, I see the inability of these indexes to break out to the upside as a sign that the next big move to the downside in the markets and the economy is merely a matter of time. In 48 years of charting I have come to see that technical analysis is useful in understanding all kinds of trends, not just in stock and commodity prices as most traders use them, but in economic data as well. Technical analysis helps us to recognize and understand clearly the history of where things have been and where the trends are currently headed. TA has some predictive ability in regards to the near term future as well but its greatest strength is in understanding the past and the present. The all important “present” is something that most pundits, with their focus on the short term headlines fail to grasp because they lack the proper perspective and clarity about the longer term trends.

The longer perspective in this case is deeply troubling.

The shorter term negative divergences from economic data and stock prices are also a red flag. If these negative trends do not reverse within a few months, and especially if they deepen, they would suggest that the stock market is likely to be forming the same kind of top that it formed in 2000 and 2007. Worse, any downturn today would start from a weaker economic position than either of the two previous bear markets. The financial and economic impacts of a downturn from such a weak position are likely to be devastating.

A History of GDP

A History of GDP