FX Traders’ weekly EURUSD fundamental and technical picture, this week’s market drivers that could change it- the bullish, the bearish and likely EURUSD direction.

First we look at overall risk appetite as portrayed by our sample of global indexes, because the EURUSD tends to track them, particularly the leading US and EU indexes. This week certain similarities between the EURUSD and indexes were instructive.

Just as last week’s bounce in the US and EU stock indexes was just a technical correction, so too was this week’s modest pullback.

The continued bullish drift higher for global indexes is mildly supportive of the EURUSD as long as:

The very modest divergence between the EURUSD (up on the week) and the indexes (down on the week) is not significant. 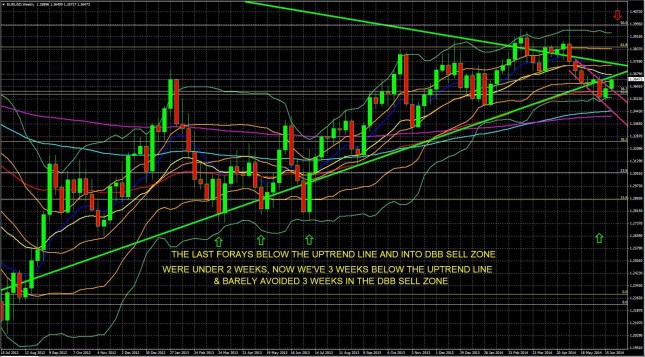 Likely Medium Term Trading Range With Support Around 1.355, Resistance Around 1.367, With Neutral Bias

Given the lack of news surprises, the predictable support and resistance areas held.

The 1.355 support area held (due to the 38.2 line of the long term Fibonacci retracement there) as the low of the week, and the uptrend line from 2012 around the 1.365 area provided resistance and capped the week’s advance.

The continued mild advance and test of that resistance keeps the pair more firmly in the middle of its 20 week trading range of 1.35 to 1.39, though from a medium- term technical perspective we’d be surprised if the pair made a sustained move past 1.375 unless events turn markets much more bullish.

The pair faces significant resistance in the 1.366-7 area, comprised of:

Thus the pair will need significant fundamental support in the coming week to break past this area. See the below Fundamental Outlook for details on where we could get that support.

The fact that the pair managed to close within the double Bollinger® band neutral zone reduces the pressure of more downside, giving a neutral momentum bias over the coming weeks.

Economic reports from both the EU and US were mixed. Arguably, US data was overall more positive.

While some claim that currency traders focused on the big disappointments in GDP and in durable goods, both of which raised concerns about the strength of the U.S. recovery, we’re not so sure these reports were the prime drivers, as the pair spiked up again Friday on no particular news. Also note that equities market didn’t show much reaction to these (only a minor pullback on the week), bond traders also reduced their expectations for Fed tightening.

Granted, the huge GDP miss, followed by the US 10 year note yield falling back under its downtrend line, show that tightening and rate hike expectations are being reduced

Ten year Treasury note yields fell over 10bp from last week’s high and seem ready to test below 2.5%. Most traders hadn’t expected the Fed to raise interest rates until H2 of 2015, but after this week’s reports, the odds of a rate hike in June 2015 dropped to 50% from 60% last week.

With both Fed and ECB policy set for the coming months and data unlikely to bring policy changes until the fall at earliest, data has become less of a true market mover and more of an “excuse provider” for EURUSD traders to push the pair up to the next resistance level or down to the nearest support level, as the pair still looks locked within its 20 week trading range.

US Jobs Reports: Only A Huge Surprise Matters

In keeping with the above principle, even the monthly US jobs reports are unlikely to move the pair much, given that the Fed is looking at medium to long term trends and a single month’s data is unlikely to influence it.

Non-Farm payrolls are scheduled for release next week along with related reports that serve as leading indicators for the Friday official monthly jobs figures, like the ISM manufacturing and non-mfg reports, ADP non-farms payrolls, etc. The odds of these reports boosting the USD and driving the EURUSD lower are minimal, because merely beating forecasts isn’t enough. Unless we start seeing consecutive months of smashed expectations, like 300k+ new jobs, the Fed will continue to see the jobs recovery as too slow and weak to justify accelerated tightening.

The Fed is continuing to reduce monthly asset purchases by $10 billion, and at this pace, the Quantitative Easing program ends in October or December. So the next real chance for the Fed to share their plans on what happens after QE ends is in September so before then we don’t anticipate any significant upside momentum for the USD.

Assuming the “slow and steady” recovery theme remains, even in September the dovish Fed is unlikely to opt for meaningful tightening, although we wouldn’t rule out hints of a 25 bps hike “sometime in 2015” just to keep speculation down.

That said, the medium term downside for the USD is limited because ultimately the Fed’s policy direction is towards tightening while the ECB’s is, if anything, towards more easing, which could well come long before mid-2015.

Lower summer trading volume adds a further damper to volatility that’s already low given the lack of new fundamental drivers, particularly the lack of anticipated near term change in Fed and ECB policy.

As noted above, benchmark US yields remain the key short term USD driver.

Although the ECB is supposed to be more dovish than the Fed in the medium to long term, the EUR has bottomed and even bounced because no one expects further ECB easing in the coming months. That leaves the pair to make short term gyrations within its trading ranges based on weekly developments.

So the event most likely to change the perception of steady ECB policy is Thursday’s ECB meeting, rate statement and press conference. No policy changes are expected, but the tone of Mario Draghi’s press conference remarks might push the EURUSD past 1.37, or send it down to retest 1.35. We suspect he’ll attempt to avoid such swings, and if anything try to talk down the EUR to ease deflation threats.

Thus it’s more likely that Draghi will seek to reinforce the central bank’s dovishness and emphasize that it’s ready to increase stimulus if inflation and economic activity don’t improve in the coming months. This kind of dovish tone should end EUR gains for now.

The long term outlook continues to favor EURUSD weakness, so view moves above 1.3650 as possible opportunities to sell long positions or begin building short positions for those willing to risk going short before the trend turns lower.

We’ve the usual first week of the month calendar, packed with events to move the EURUSD from both US and EU data, as well as from data that moves the pair by its influence on overall risk appetite.

Due to the US July 4th holiday on Friday, US jobs reports have been moved up a day to Thursday, thus stealing the thunder of some related reports that usually come earlier and offer a preview of these reports. One such report is the non-manufacturing PMI. Traders will be focused on the actual report.

Thus expect very low activity Friday, with the US mostly shut down and few events at all on the calendar.

Top events to watch include: 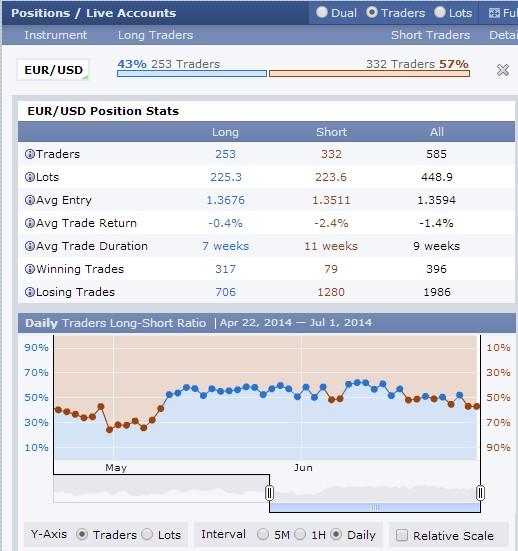 The latest COT report (as of last Tuesday) shows little net change in EURUSD positioning. Our real time sample suggests retail traders have moved modestly to short positions over the past week.

How Much Alcohol is OK?