Time to Sell the Bombed-Out Banks

With another round of new highs in the books, investors have every reason to feel complacent heading into the new trading month.

But if you’re invested in the wrong sectors, you’ll find yourself unable to keep pace with the major averages…

Today, I’m going to show you sector crammed full of busted charts and broken trades. Yes, it’s a sector I really liked over the past couple of years. But now, it’s time to get out of these stocks-and stay away until conditions improve.

You can’t count financial stocks among the market’s best performers this year. As a group, they’re looking pretty darn sluggish. In fact, out of the major sectors, only cyclical stocks are performing worse than the financial names in 2014.

The big boys of finance aren’t looking so hot. J.P. Morgan Chase, Citigroup and Bank of America are all red on the year. In fact, the Financials Select SPDR is barely staying afloat thanks to a couple of major holdings that are bucking the trend, like Wells Fargo (which notched yet another new closing high last week).

Still, XLF is sneaking toward its 2014 highs, while regional banks have slipped lower since early April… 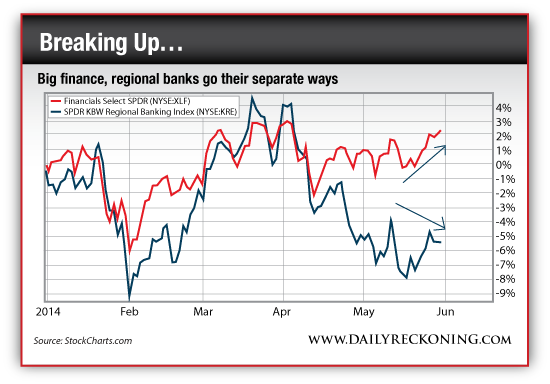 Regional banks and the mega-cap financial stocks had traded hand-in-hand until about six weeks ago. Now, an ugly divergence is emerging. Concerns over how these smaller banks will perform in an environment where rates continue to drop are taking their toll. As of this morning, the SPDR KBW Regional Banking Index is off more than 5% year-to-date.

I’m not a fan of the financial sector right now. But I really don’t like regional banks. If you are invested in any names in either of these sectors, it’s time to look elsewhere. If this market runs into seasonal weakness this summer, I have a feeling these financials will take a serious hit…

Why the Gold Spot Price Is Hovering So Low