EURUSD: Edging Toward a Trend Reversal

Weekly Outlook 25 May 2014: Drivers, Ramifications, How to Profit

FX Traders’ weekly EURUSD fundamental and technical picture, this week’s market drivers that could change it, plus the bullish, the bearish and likely EURUSD direction. New drama feeding old drivers.

This week we again minimize our usual discussion of overall risk appetite per our sample of leading global stock indexes. For the past 3 weeks they haven’t helped us forecast EURUSD moves:

While the pair remains in its 15 week trading range, it’s barely hanging on at the low of that range. It remains at the lower edge if its neutral double Bollinger ® band zone. With Friday’s close below the 1.365 support level for the second straight day, that level looks broken. The next big support zone is around 1.36 -1.355, buttressed by five layers of converging support:

As we’ve said before, a confirmed close below 1.35 (we allow for some wiggle room) is our signal that the pair has topped out for now and that the uptrend dating from mid-2012 is over for now.

Actually, the odds favor more downtrend as soon as we get into the double Bollinger® Band sell zone, which begins around 1.36. This is a key level for all forex investors, as a new EURUSD downtrend will provide potent fuel for a USD rally against its other counterparts, for reasons we’ve discussed here.

Then the only question would be whether it’s going to test deeper support around 1.345 – 1.34 (where both its 100 and 200 week EMAs reside) or settle into a new flat trading range centered around the 1.355 zone.

FUNDAMENTAL OUTLOOK: THE BALANCE OF BULLISH VS. BEARISH

New events continue to reinforce the same fundamentals behind the downtrend of the past two weeks:

ECB President Draghi’s hints of possible rate cuts were what started the EURUSD’s downtrend after the last ECB meeting. Ongoing speculation about the new stimulus, fed by continued poor EU economic data last week, kept that speculation thriving, and was the prime driver of the EURUSD downtrend last week. This past week we had yet another new development to expand expectations about the likelihood and extent of ECB easing.

THE big story of the past week, has been the recent accelerated drop in US interest rates, and new evidence this past week that they will remain lower and for longer than previously believed.

While the implications of this trend are profound for many global asset markets, arguably none is more affected than currency markets, and especially that of the EURUSD. Although lower USD rate expectations should be bullish for the EUR and thus the pair, ironically the effect is the opposite. Because the ECB wants to lower the EUR, the news of a weaker USD is new fuel for speculation that the ECB will need a bolder stimulus program than previously expected in order to drive the EUR lower relative to the USD (and other major EUR counterparts). See below for a quick summary, and our special report on this for full details, as well as our weekly global market preview post here.

Bond Yields Falling: One bright spot was that Spain was able to sell 10 year bonds at lower yields than the prior auction (2.97% vs. 3.06%), and so did Germany.

Just as we noted last week, the downtrend once again stopped near the next major support zone around 1.36, which is buttressed by multiple support indicators, like the uptrend line dating from mid-2012 as well as the 50 week EMA and a few Fibonacci retracements as noted above. Last week the 1.37 area held, the week before, the 1.375 zone.

When Will The Downtrend Stop?

Each of the past three weeks has brought new bad data and new developments to expand expectations for the likelihood and size of an ECB easing package to be announced at the June 5th meeting, rate statement and press conference.

If no major new bad news hits the pair, or overall risk appetite, AND the pair can stay over its 200 day/50 week EMA (a critical psychological support level around 1.355) then there won’t be any reason to tempt tests of deeper support. We don’t expect any further pressure on the EUR from the ECB. It’s likely that the market has already fully priced in ECB actions, thanks to the recent unequivocal ECB signals. Also, as we discuss below, the likely mix of stimulus steps is not likely to include anything like a US-style QE program that could radically devalue the EUR.

However as we’ve said repeatedly in recent weeks, if the pair breaks that level and makes a confirmed move below the 1.35 zone, it’s time to call a top to the uptrend. The question then becomes whether the pair flattens out or starts to test deeper levels.

Typically, a confirmed break below the 200 day moving average suggests further downtrend ahead. The fact that a confirmed move below 1.36 already puts into the EURUSD double Bollinger® band sell zone suggests that the pair will already be on its way down before it even hits the 1.355-1.350 area of the 200 day moving average. One it’s in that area, the odds favor more downside as the technical damage alone becomes a self-fulfilling prophecy that prompts selling.

Last week I noted that the week’s scheduled economic calendar events were unlikely to provide much in the way of new, lessons or market moving events. That proved true. The biggest lesson was from non-calendar events, as discussed below.

The biggest lesson of the week, arguably of the year thus far, is the shift in US interest rate expectations. This is huge, because as we’ll describe below, it affects almost all major global markets and asset classes.

First, look what’s been happening to yields on the benchmark 10 year US Treasury Notes. 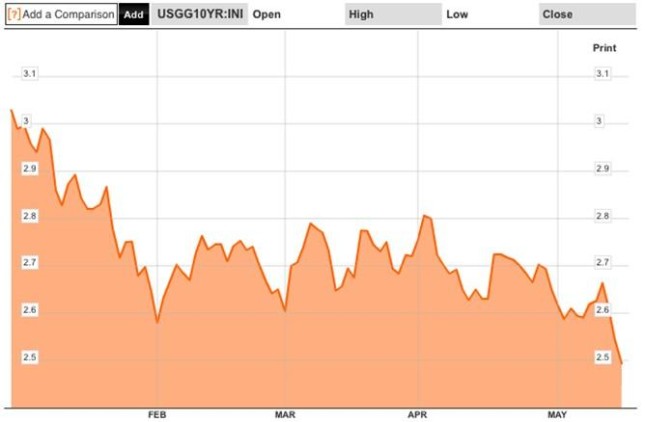 Despite the presumed recovery that is supposed to bring higher rates, they’ve been falling, especially recently. Why, and why the recent sudden dive?

Here are the most likely reasons, each of which we cover in detail in our special report here.

Ramifications And Guidelines For Profiting

As for the EURUSD, the US’s greater economic strength (see our weekly preview here and our special report here for more on that) continues to suggest the USD will eventually rise against the EUR and thus drive the pair lower. However it’s becoming less clear when, if ever, that rate advantage will materialize.

Over the next 6 months to a year, speculation on rates and related market reactions all depend on the data and the Fed’s record at long term forecasting isn’t any better than anyone else with their resources (not amazing) as it’s hard to model an entire economy. A bet on a rates bouncing is tempting.

In addition to the above, monitor news on the following developments.

How Will The ECB Ease?

A Fed-style asset purchase program (aka QE) is more complicated and controversial for the ECB, so it’s widely expected to stick to one or a combination of 3 possible types of rate cuts.

Why This Matters: The Key Take-Aways

With rates already low, the first two options are unlikely to have much impact.

The third option is more radical and with coming bank stress tests may not help increase liquidity, and may even lower it by causing big depositors to move funds elsewhere, or, to prevent that, to banks absorbing that cost and finding other ways of recouping that expense.

In sum, none of the above steps are likely to justify much more of a drop in the EUR, and so the coming stimulus steps expected at the June 5th ECB meeting are likely already priced in.

Keep alert for news on these over the coming week.

Elections To Watch This Week

There are two election results this week that could move the EURUSD in particular, as well as the markets in general.

At a time when policy makers agree the EU needs a closer political union and more centralized economic control in Brussels, these elections are expected to yield a more anti-EU parliament more inclined to preserve and expand national sovereign powers of member states over their own economies, rather than to cede them.

As far as the EURUSD is concerned, the best result would be that these parties don’t gain enough clout to interfere with the centralized control and oversight that Germany and other nations demand in exchange for risk sharing.

The worst case would be a clear victory for the more nationalist parties that casts doubt on the EU’s ability to continue with needed integration. Remember, the current calm in the EU rests on the confidence in the EU created out of thin air by Mario Draghi’s 2012 promise to do whatever it takes to keep EU members economically stable and solvent, backed by his (untested) OMT program. If the elections erode that confidence, then it’s just a matter of time before markets actually test his resolve, as well as the OMT plan’s effectiveness.

Uncertainty about both the election results and the coming ECB easing has already sent spreads between peripheral bonds and German bonds to 2 month highs. A spike in those rates could further erode the confidence that supports the GIIPS nations’ recoveries.

Likely Impact On the EUR

If Euro-skeptic parties secure more than 25% of the seats in the 751-member Parliament, it could reduce confidence in the EU’s ability to progress towards needed greater political integration and risk sharing. However, because the near term effects would be hard to determine, we’d expect such a result to be only modestly negative for the EUR. Longer term, such a result could erode confidence in the EU’s longer term survival.

The reformist pro-Western Europe Petro Poroshenko is widely expected to win in the first round of elections. The big question therefore is whether Putin will honor his promise to “respect” the Ukraine vote results. If Putin continues to create chaos in the Ukraine, it would add pressure on the financial markets and the EUR. Remember that the whole crisis began when Putin saw the former pro-Russian Ukraine government forced out and feared loss of another border ally.

Despite worsening violence in Ukraine, we’ve seen no signs of meaningful trade disruptions, with talk of further sanctions limited to luxury goods like Russian caviar and vodka.

The top scheduled events this week are likely to be the election results for the EU parliament and Ukraine, US durable goods and preliminary GDP. Bank holidays could limit volatility if news is quiet, or exaggerate it if there are material surprises on those days. Top events are in boldface.

No major economic calendar events AND both US and UK have bank holidays. 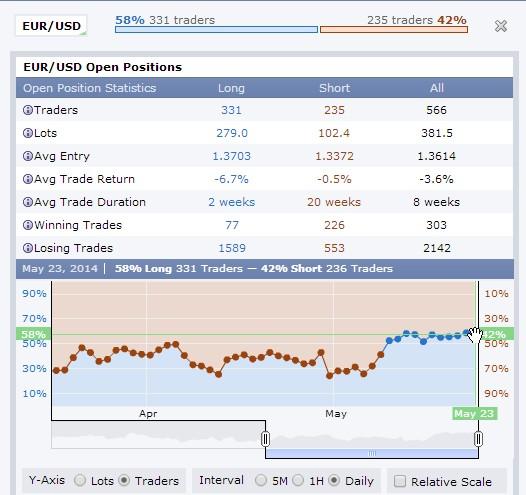 Sample of retail forex traders EURUSD positioning as of May 23 2014
Source: Forexfactory.com

Our real time sample of 566 retail traders, with an average holding period of 8 weeks, is (as a group) continuing to attempt to anticipate a EURUSD bounce before getting confirmation of it rather than ride the trend. Usually that’s a losing approach and a classic beginner’s mistake. Just saying.