“Our friends at the WSJ are attributing commodity price surges to El Nino,” reports our commodities connoisseur Matt Insley. “Sure, the verdict isn’t out. Maybe Brazil’s drought and Mexico’s heavy rains are due to El Nino?”

Matt has no clue. Neither do I.

“But what I do know, is that commodity prices for a lot of the staples you and I eat on a daily basis are going absolutely b-o-n-k-e-r-s.”

Matt’s not kidding. When it comes to the commodities market this year, the stuff you eat is soaring. 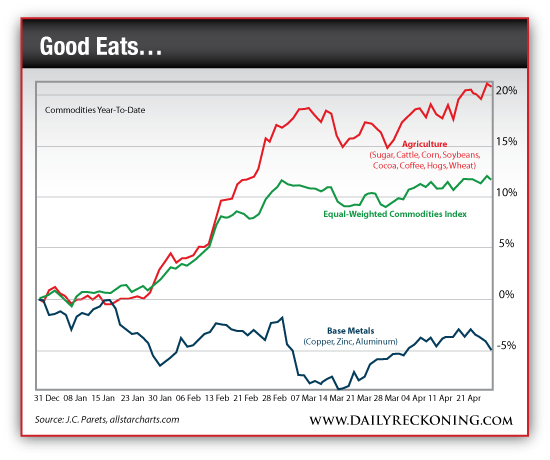 As you can see, there are a ton of great looking setups in this space. Lucky for you, Matt has put together a comprehensive list. He’ll also show you what to buy-and how to buy it.

Coffee – “Starbucks Will Have to Raise Coffee Prices,” says 24/7 Wall Street, “Coffee Prices Skyrocket After Brazil Drought,” says Fortune, and the list goes on. The story is simple: Drought is ravaging much of Brazil’s coffee-growing region. Brazil, as you may know, is the world’s largest coffee producer, so this drought is certainly taking a toll on prices. Coffee prices are up 75% on the year.

Orange Juice – Florida’s citrus growers are bracing for what’s expected to be the worst crop in a decades. “Future Sours for Orange Crop,” a headline from Barron’s reads. Due to an outbreak of Asian insects, Florida oranges are falling off the branch at alarming rates. OJ prices are up 28% in the past six months. With price action like that in OJ, you can’t help but think about the movie Trading Places…

Cocoa – Not to be outdone, cocoa is up 34% since June. Unlike the staples mentioned above, though, cocoa prices are scorching higher on demand from emerging markets instead of supply-side concerns. Say what you will about China’s economy, but its taste for chocolate is on the rise. Prices are following suit.

Cattle and Hogs – The meat market is on the rise as well.

“Cattle futures rose to a record as ranchers struggled to boost the U.S. herd from a 63-year low and hogs climbed to a 34-month high after a virus that kills piglets spread.”

The U.S. is the world’s top beef producer, and with a drop in production this year, prices have spurred prices, which are up 16% year over year.

And, of Course, Limes – The Wall Street Journal reports:

Looks like those summer-time mixed drinks are going to be a little more expensive this year.

And remember, Matt says, the “big” crops here in the U.S. – corn, soybeans and wheat – have barely kicked off their growing season.

“If drought or floods come the way of America’s breadbasket, prices for these staples could follow the same pattern we’re seeing above”

Infographic of the Day: Minimum VS Average Wage