With the right trading mindset, you can turn America’s glowing natural gas future into profits.

Today, I want to give you a snapshot of where I think natgas is heading for the rest of the year, and how you can continue to make gains as America’s energy renaissance kicks into high gear!

But first, be careful what you read…

While this winter (the winter of the “polar vortex”) was a windfall for natural gas prices, you’ve got to keep this short-term move in perspective. You can’t always trust everything you read, either.

Here’s what Bloomberg has to say:

“The polar vortex that sent temperatures tumbling across the country in January boosted consumption by households and power plants to all-time highs. Waves of frigid weather through March pushed stockpiles to the lowest level in 11 years.

“Almost 3 trillion cubic feet of gas will need to go into storage during the warm-weather months to cover winter demand, something that’s never been done before.”

Reading the editorial above, you’d think that natural gas prices should have support for quite some time.

Following Bloomberg’s logic, you’d wonder how we’d ever dig ourselves out of this hole! We’ve lowered our inventories beyond help! How will we ever produce that much natural gas?

So when you do the math, you’ll realize that we could dig ourselves out of this stockpile hole in quick order.

All thanks to what we call the “shale gale”!

As shale formations continue to produce natural gas at alarming rates, we could continue to see production levels make new all-time highs. The sky is the limit here.

The Marcellus Shale formation in Pennsylvania, for instance, accounts for over 18% of U.S. production. That’s a huge amount considering the Marcellus was barely producing a “drop” of natural gas less than seven years ago. We’ve seen an impressive run-up, to be sure, and there’s more to come: 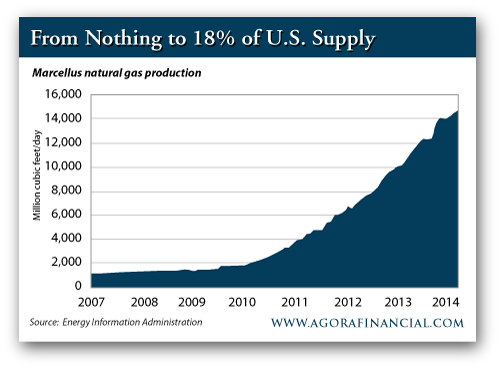 Production has been on the rise even in the face of “low” natural gas prices, so with a short-term bump in prices due to winter heating demand, producers could continue to ramp up production.

And the Marcellus isn’t the only shale game in town.

Production from Texas’s Eagle Ford formation (known mainly for its oil production these days) is also ramping up its natural gas production impressively.  Take a look… 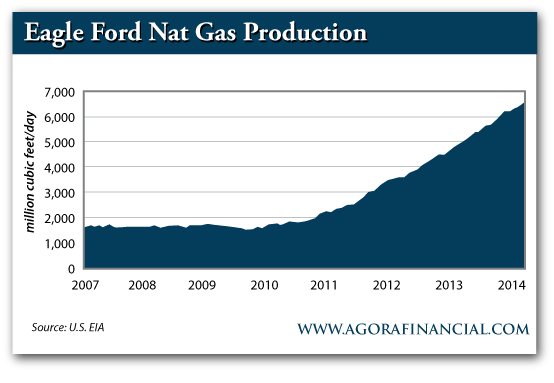 To be sure, when drillers start aiming for pockets of pure natural gas – of which there are MANY in the Eagle Ford – we could be looking at an even more impressive growth story.

Where there’s a growth story, there’s a way to play it!

Remember, we’ve seen a nice boost in natural gas prices over the past few months – so if drillers were producing record amounts of gas at $3.50, they’ll surely produce it at $4-4.50. And it’s important to note that even if prices pull back below $4, which I think is likely, we’ll continue to see growth in natural gas production. This is one of those unstoppable trends that we love to see as investors!

The initial way to cash in on this continued drilling boom is through what my friend and colleague, Byron King, calls the “Oil Service Trifecta.”

Natural gas producers could also catch a bid, but before we go diving into those names (now that the winter price rise is subsiding), we’ll want to see if prices can keep support at $4.

America’s natural gas dialogue continues to change, but keeping tabs on this story could continue to provide us with profit opportunities. Stay tuned.

Yet Another Claim That The US Is An Oligarchy, Not a Democracy

What You Missed One Week Ago

What You Missed One Week Ago