EURUSD at Short, Long Term Crossroads; What Will Decide Its Fate?

US and European indexes were not only up last week, but also the European indexes overall moved back into (or at least closer to) the double Bollinger band buy zones, so long term risk appetite momentum is strong enough for the odds to favor further gains. Barring any potent EUR or USD news, the EURUSD tends to track overall risk appetite, particularly the S&P 500.

Summary: Neutral longer term (weekly chart), bearish near term (daily chart). Currently at crossroads as strong support of the 1.37 level has held. If it breaks this week, a test of the 1.36 level is likely. If support holds, upside for the coming week per technical data is likely limited to around 1.3750 – 80, the upper end of the new descending channel formed by the past 3 weekly candles. 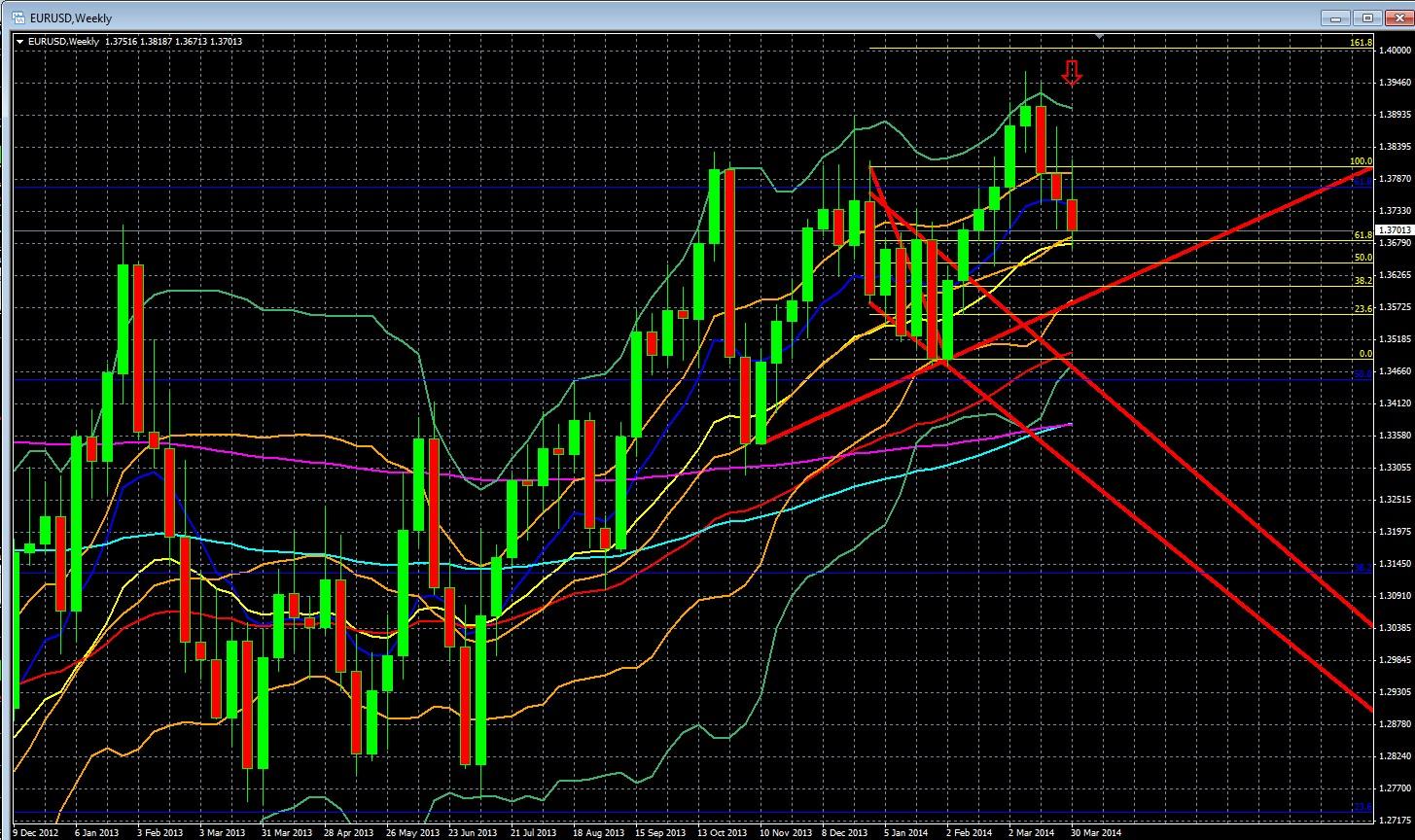 However strong support of the 1.3700 level held. Note that this level has multiple levels of support, including:

Longer Term Conclusions For Weekly Charts: Neutral But At Major Crossroad Of The 1.37 Zone 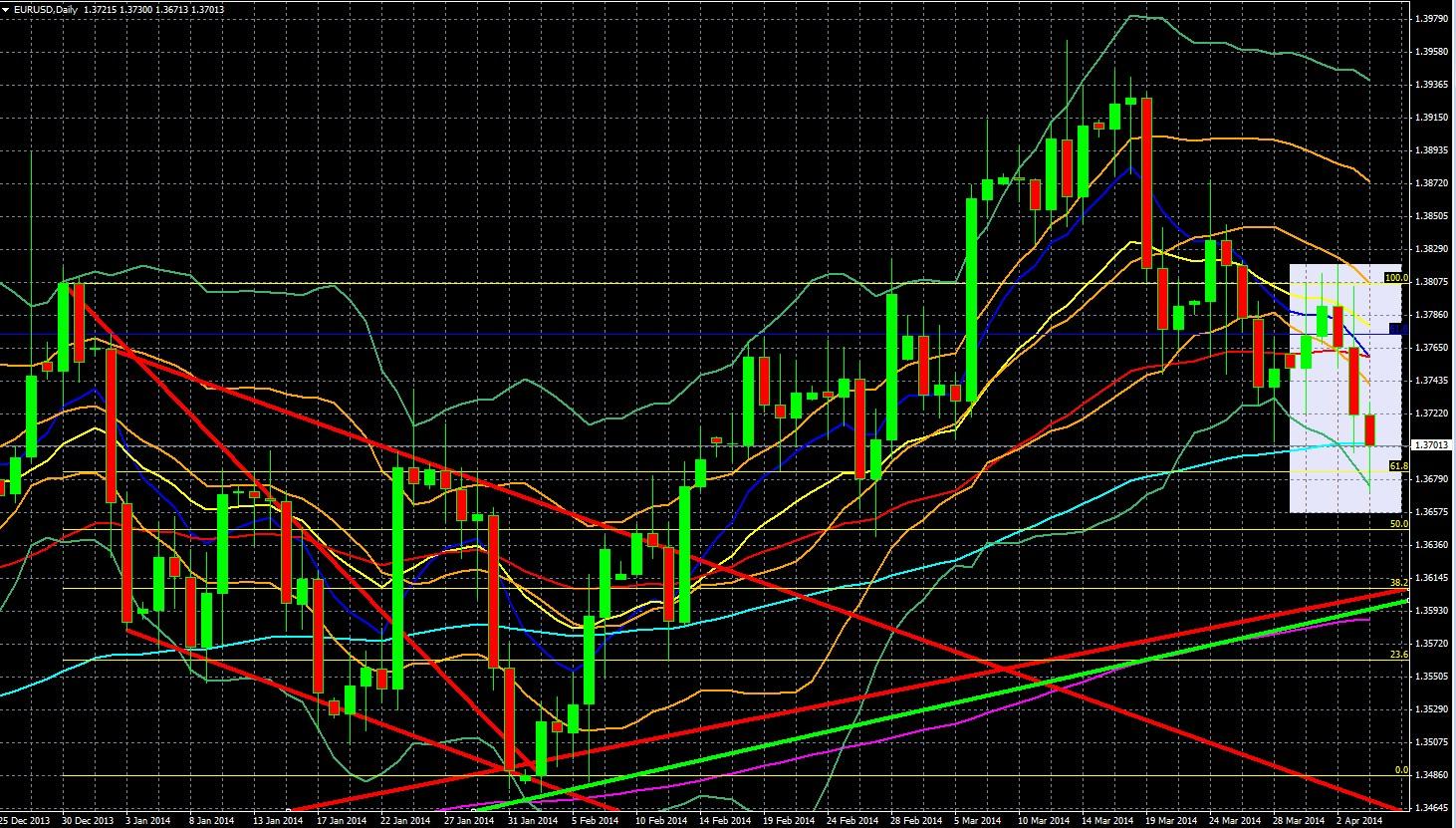 This is a weekly outlook, so we tend to ignore the very long term picture of the monthly EURUSD chart.

Occasionally, when we appear to be at a very long term crossroad, it’s worth presenting the monthly EURUSD chart. 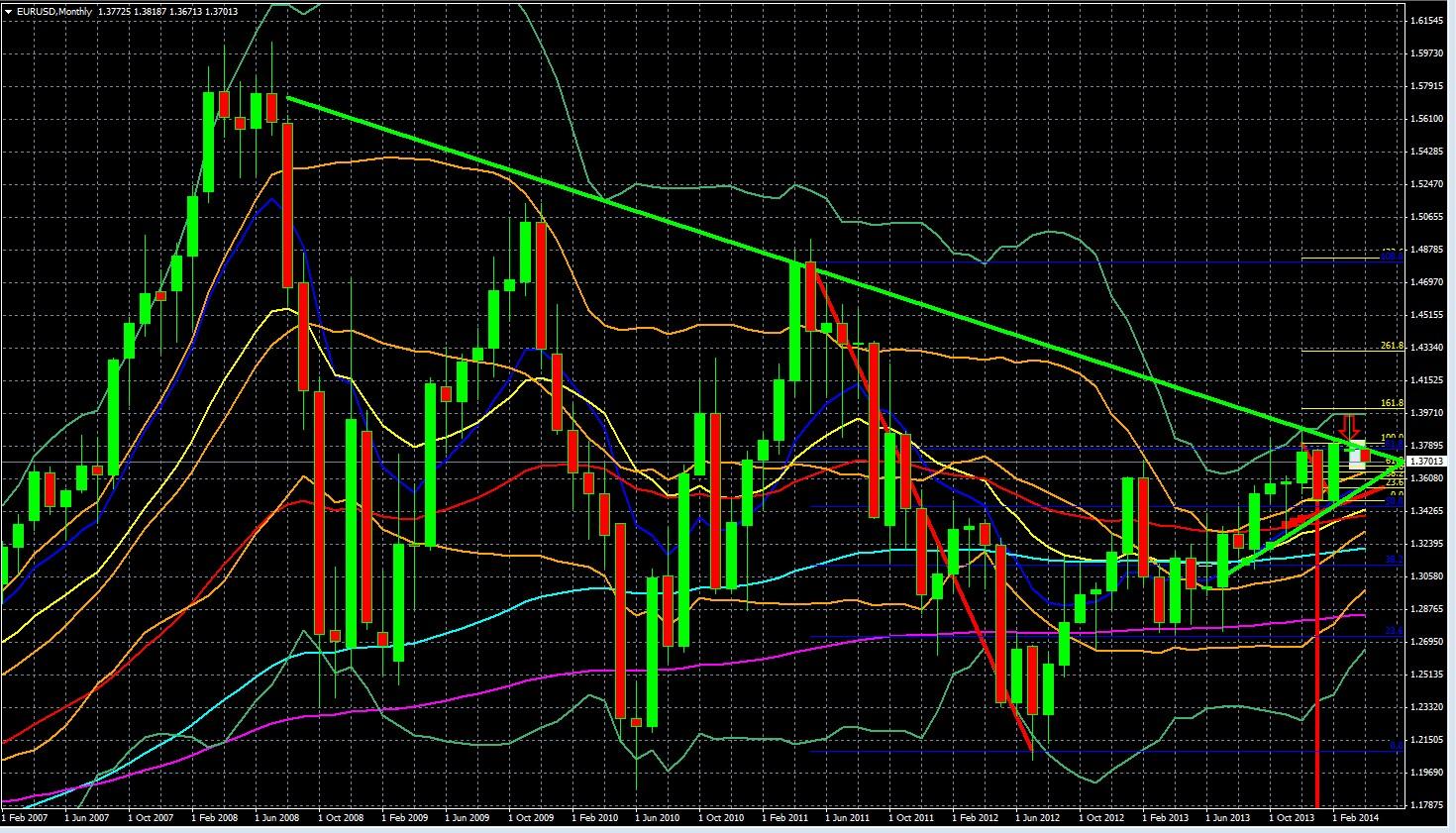 The monthly downtrend line dating back to February 2007 remains intact

See our conclusions in the fundamentals section for how we see this being resolved.

That means yield differences between the two currencies aren’t likely to change much, so the pair is likely to move with overall risk appetite. Our sample of global stock index weekly charts suggests risk appetite continues steady to higher. The EURUSD tends to track the indexes, so we must regard the current 3 week pullback as just a normal short term retracement within a (weakening) longer term uptrend.

ECB appears to accept EUR strength while the EURUSD remains under 1.4000

Yellin’s recent comments sounding almost as dovish as Draghi’s, despite better US fundamentals and data.

In sum, although it’s clear markets anticipate an eventual return to the EURUSD’s long term downtrend, that’s not likely to happen until higher USD rates appear imminent. Thus as we note above, the EURUSD weekly uptrend isn’t dead yet.

China Stimulus: Last week China announced a mini-stimulus program, confirming that they despite bearish reforms including tightening credit, they want to keep the slowdown gradual.

The combination of dovish ECB comments and improving US data

After leaving interest rates unchanged Thursday, the ECB continued to talk down the EUR at the press conference that followed, sparking the biggest single day EURUSD selloff of the week.

Mario Draghi spent most of his press conference on the possibility of additional easing and outlining the ways they could increase stimulus. He was unusually clear on how Quantitative Easing, another rate cut, negative deposit rates and a narrower rate corridor were all under consideration.

For the first time this year, Draghi noted his biggest fear is stagnation.

Clearly the ECB is signaling its increasingly dovish bias, however we don’t see any imminent moves, because the ECB did not see an intensification of deflation, indeed it expects some degree of rising prices in April.

Longer term, markets continue to anticipate an eventual widening rate advantage for the USD, although the gradual pullback in the EURUSD suggests that no one thinks that’s coming soon. As noted above, the technical picture thus far suggests only a normal short term pullback within a longer term (albeit weakening) uptrend.

In sum, the long term story of the Fed tightening and ECB easing remains a long term story that is at least 6-12 months away if the current April 2015 first rate hike consensus is true.

Hit strongest monthly level since March 2007. Car sales generally correlate well with other economic indicators like jobs and retail sales. If the latest figures are indicative, then the snapback from recent lower winter months suggests recent weakness in US data was indeed heavily influenced by temporary bad weather. 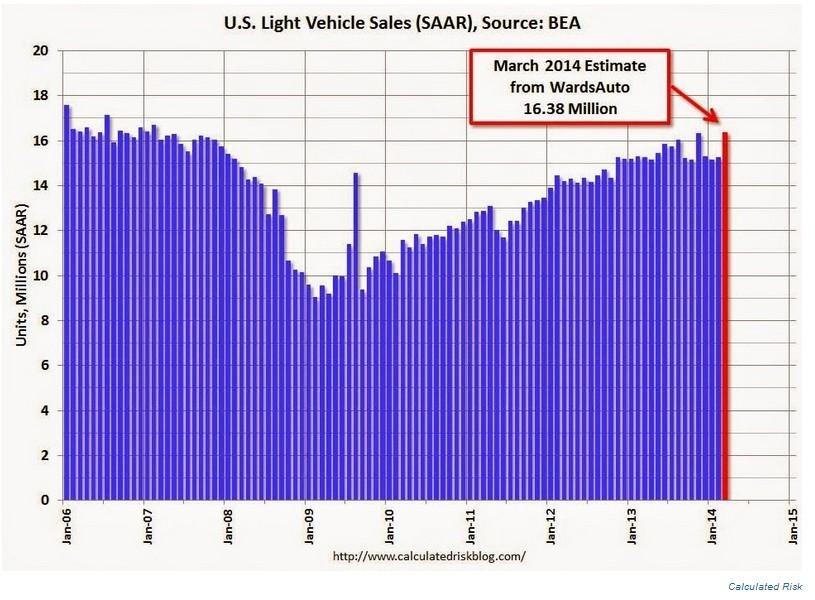 In other words, this suggests the US recovery remains on course, and so does the taper, as well as an eventual USD interest rate advantage from a Fed rate increase in the coming year.

This too confirmed the “slow but steady” US recovery theme. Overall, the jobs data was respectable.

The jobs data refuted winter weather excuse for recent US data weakness. Construction employment rose by 19,000 in March, only a minor improvement over the 18,000 added in February. Had winter weather conditions really hit the economy, construction payrolls would have spiked in March just like we saw with car sales above.

Average hourly earnings were essentially flat in March after increasing 0.4% in February. Thus the increase in hours should help overall earnings going forward due to more hours worked.

The unemployment rate remained at 6.7% in March while the consensus expected the rate to tick down to 6.6%.

Neither the Fed nor ECB is planning any near term policy changes.

In the long term the pair should drop as Fed policy becomes more hawkish and USD supportive relative to that of the ECB.

That leaves the pair to move with overall risk appetite, which, per our sample of global indexes, continues to drift higher. It will take a major risk aversion event to change that trend, or an enduring change in top tier US, European, and global economic growth data (which drives overall risk appetite). There are no such shifts or risk aversion events on the horizon, although there’s no shortage of potential sources, for example:

Our real time sample shows retail traders have increased long EURUSD positions over the prior week, as shown in the chart below. 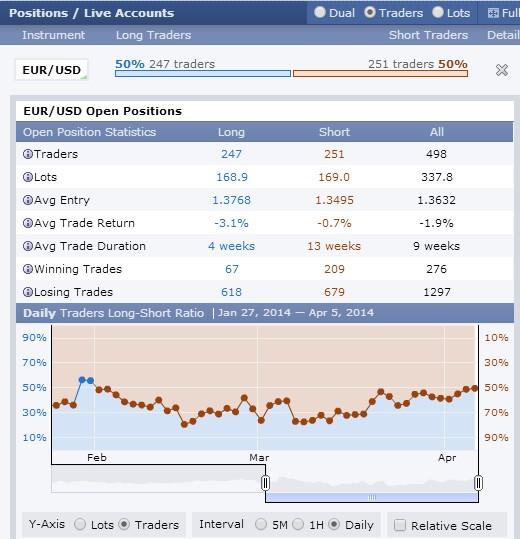 On a week-to-week basis they’ve tended to be a good counter indicator.

Per the more reliable sample from the US commitment of traders data, as of the week ending April 1, speculators have cut long positions slightly and increased shorts slightly, the opposite of our sample traders’ behavior.

As usual, there are only a few top names in this first of the 3 weeks when earnings season is really influential, but they include leaders in global materials and banking.

Market Commentary: Risks Ahead: SP500 Closes Below 1848, Major Averages Down 1+%

Infographic of the Day: Finding Drinking Patterns in Tweet Data

Infographic of the Day: Finding Drinking Patterns in Tweet Data