EURUSD Weekly Outlook: And Now the Storm After the Calm

FX Traders’ weekly EURUSD fundamental & technical picture, this week’s market drivers that could change it- the bullish, the bearish and likely EURUSD direction.

How Did We Do Last Week? Spot On

Last week’s EURUSD forecast was neutral from both a technical and fundamental perspective. This outlook proved correct, as the pair was little changed on the week.

Some of our readers complained that the forecast was inconclusive. We replied that we “call it as we see it,” and indeed the technical and fundamental picture itself was inconclusive. Our goal is to save readers the time needed to review the technical and fundamental evidence and make conclusions based on that evidence. We have no crystal ball. If the evidence is murky, that’s what we report.

First we look at overall risk appetite as portrayed by our sample of global indexes, because the EURUSD has been tracking these fairly well recently. Compare the S&P 500 weekly chart and the EURUSD weekly charts below, and you’ll see that the pair continued this pattern last week.

Our sample of weekly charts for leading global stock indexes continues to indicate suggests a mixed technical picture, as detailed below.

Note however, that the EURUSD weekly chart continues to track the S&P 500. That’s bullish because this index retains its upward momentum, though like the EURUSD itself, this index was little changed on the week.

Look at each region: 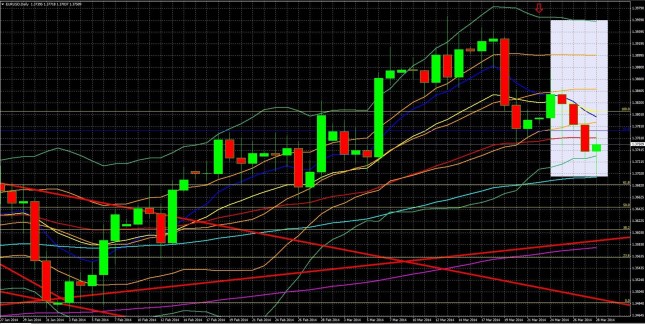 The EURUSD not only hit a lower low on the daily chart (confirming the near term downtrend), it also showed increased downward momentum:

Resistance around 1.39 is likely to hold and limit any gains.

FUNDAMENTAL OUTLOOK: The Balance Of The Bullish Versus The Bearish

The biggest long term wildcards for the EURUSD are:

Serious Sanctions Too Painful For EU, Germany: Meaningful economic sanctions against Russia would cause too much economic pain for Russia and in the EU, especially for Germany, and thus such sanctions are unlikely. Again, see here, here, and here for details.

The EUR’s downtrend is believed to reflect a consensus view that the ECB will sound dovish. This view leaves the EUR primed for a bounce as we don’t expect any further easing at this time. Markets have tended to overestimate ECB dovishness in the past months, and the EUR has tended to jump after recent ECB meetings.

Risk of Painful Economic Sanctions Remains: It’s unlikely that The Cold War v.2.0 is over, if not from Ukraine than from other Russian moves on similarly weak neighbors that are not vital strategic interests of the West and that have large Russian populations.

Russian Ruble’s Fall Vs EUR May Make Germany More Open To EUR – Dilutive Easing: Compared to a year ago, the EUR is up 25% vs. the RUB. If the crisis escalates it could fall further, hurting EU business revenues in Russia from some combination of falling volume (if EU firms don’t cut prices) and profit margins (if they do). Although last week saw rising deflation risks in Spain, that isn’t enough to remove German opposition to further easing.

US bond yields look like they’re starting to rise vs. those of Germany. If that trend continues, the pair IS heading lower. 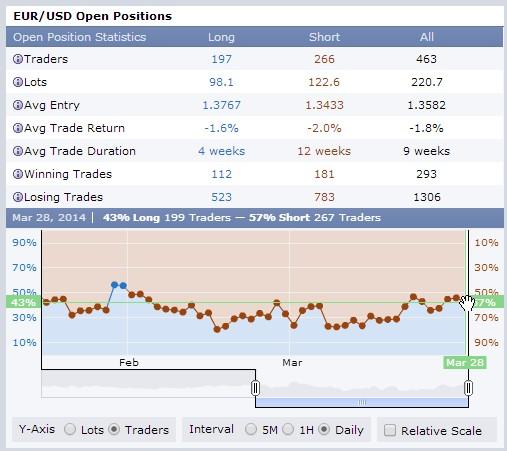 Our real time sample of retail trader positioning remains unchanged from last week. Although the group remains short overall, they’ve shifted to more long positions in recent weeks, as the actual daily technical (noted above) have deteriorated. On a weekly basis, this groups’ moves tend to be wrong. In other words, if they go long, the pair has tended to fall.

We’ve the typical first week of the month economic calendar, loaded with top tier, market moving risk events that could overwhelm the above technical outlook if the results provide enough surprises, bullish or bearish, in the same direction. The big events that could move general risk appetite include:

4 out of the last 5 months, the euro appreciated on the day of the European Central Bank’s rate decision. This mean Mario Draghi has been consistently less pessimistic than investors anticipated and while this could remain true this month, the odds are against it.

Ultimately the big question is whether the ECB will see the weakness as temporary or more enduring. We don’t believe they’re ready for new easing yet. However if German business interests somehow fail to prevent real sanctions and limits on business with Russia (unlikely- see here and here – but possible), then German opposition to further easing could melt away.

Items 2, 3, and 5 directly impact one or both currencies, so any surprises will be particularly potent market movers.

Catching up with Super-Fast Computerized Markets