Markets Skate Through Mountain Of Supply Unscathed While Dealers Distribute

The Treasury has now pounded the market with $231 billion in net new supply over the past three weeks and the markets haven’t even flinched (until today). It’s amazing…

The Treasury had a huge week last week, with a net of $85 billion in new supply. The markets didn’t even blink. Maybe they will on Monday, but to absorb that much new supply, now up to $231 billion over the course of three weeks, without even a flinch, is extraordinary.

2/23/14 The fact that the markets held up so well in the face of this wall of new supply is amazing. It stinks of mania, in this case, institutional establishment mania, which is even more dangerous than public mania. It also suggests that capital flight from emerging market turmoil, particularly in China, is once again boosting US markets. We have seen this phenomenon every time the European financial crisis has flared up-massive flows out of Eurozone bank accounts into the US, filtered through the US Treasury market and stock market.

Against the new supply last week, the Fed settled no MBS forward purchases and just the usual $9 billion in weekly Treasury purchases. In prior months the Fed’s purchases have equaled or exceeded net new Treasury supply. February is one of the few months each year when that is not the case. In the Fed’s absence, other buyers stepped in to absorb the onslaught of supply.

Bid/covers at the auctions were again amazingly strong given the heavy supply. The indirect bid fell but only because dealers and direct bidders were more aggressive. The new floating rate notes took some of the usual short term bill bid. The indirect bid tendered on the coupons was up slightly from the last round of the same paper, and was way up from this week last year. It suggests that foreign central banks were bidding (The Fed’s FCB custodial holdings are covered in a different section of the report).

Rates were mixed vs. the last round of auctions which is shocking and inexplicable considering the immense amount of new supply. We’re seeing panic levels of demand for “safe” Treasury paper. This is where foreign inflows enter the picture to artificially prop the market.

The Fed’s outstanding total of reverse repos also continued rising from $104 billion the prior week to $114.5 billion on Friday. The new Treasury CMBs and 4 week bills did not absorb any of that cash.

2/8/14 The funds to pay for new Treasury supply will, in effect, be withdrawn from financial system accounts to go into the US Treasury’s account, largely to pay tax refunds, where they will enter the economy, giving it a seasonal boost. February is the biggest month for refunds. Therefore seeing how the trend compares to last year could give us a heads up on the economic data for February (It was up 9%).

2/15/14 There are a lot of worries about February economic data due to the weather. The Wall Street propaganda machine is conditioning investors to “look beyond the valley.” The tax refunds, and the fact that withholding taxes have been up strongly over the past couple of weeks suggests that the data won’t be as bad as the Street wants people to think.

Total supply this week is modest by recent standards at $33 billion. $20 billion of that is a Cash Management Bill that settles Monday, sucking some cash out of the accounts of dealers and other traders. The rest of the week will be easy with just $13 billion in new paper settling Thursday. The TBAC estimates new supply of another $41 billion for mid March and about $52 billion for the end of month.

Paydowns of outstanding debt will start in mid April as taxes are collected and expiring CMBs are paid off. The TBAC forecasts weekly bill paydowns of $20 billion on April 3, $18 billion on April 10 and 17, and $41 billion on April 24. It also forecasts $136 billion in the payoff of expiring CMBs between April 17 and May 1. Offsetting that, it sees $93 billion in new bill and coupon supply over the month. That results in net paydowns of $140 billion coming back into the accounts of dealers and other players. Add to that the $50 billion or so in MBS that the Fed will settle at mid month and its $9 billion in weekly Treasury purchases. That adds up to approximately $230 billion in cash being pumped into dealers and other accounts in April. It could be tinder for a final blowoff in stock prices.

Net new supply in May and June is forecast to be modest at a combined total of $96 billion for the two month period. With the Fed still pumping nearly twice that amount into the accounts of primary dealers, on the basis of this data only, there’s no reason to turn bearish just yet. Something else would need to go wrong. I don’t think that the Ukrainian crisis is it.

At some point the distortions and maladjustments, and buildup of fictitious capital fostered by the constant tidal wave of central bank printed money will eventually cause asset price distortions to spin out of control. That will force the Fed to hit the brakes, and the house of cards to come tumbling down. We’re not there yet, but we’re getting closer.

Meanwhile after getting caught heavily short at the worst possible times in 2012 and 2013, Primary Dealers are distributing Treasuries to the unsuspecting hordes. Trouble awaits. 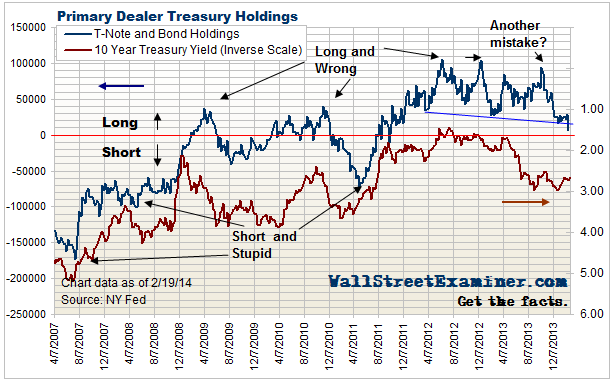 To get the rest of the story and outlook for the days, weeks, and months ahead, check out yesterday’s Treasury update, and the Fed Report to be posted later Monday. Try the Professional Edition risk free for 30 days.