So far in 2014, the Dow Jones Industrial average has dropped for 5 of the first 7 trading days. Conversely, this index has risen for 2 of the first 7 trading days, also equating to a simple 28% probability of an up-day. If markets are simply continuing last year’s upward march, how do these patterns fit in so far? Also how do these YTD market statistics match up versus prior years, and what do they imply about the Bayesian tilt with which 2014 has begun?

First we look at the theoretical distribution provided by a probability tree, where each successive day has an equal 50% chance of either branching up, or branching down. Then for a specific tree path over the first 7 days, a red value was given to indicate a down-day, while a green value was given otherwise. For more on combinatorics, one should see this first note and second note. As a reminder, we have a search bar on the blogsite so that one can independently retrieve statistics research under any term(s).

To read the tree above, for 2014, we see that the first trading day of 2014 was down. And this of course had a 50% theoretical chance of happening. Then the second trading day was up, and so we end that day with a score of one down-day out of two days. This score too has a 50% chance as shown (e.g., there is another 25% chance we’d instead have two up-days in a row, and lastly a 25% chance to instead have two down-days in a row). Through today, January 10, we’ve collected five down-days out of seven trading days. We see on the tree above, that this outcome has a 16% chance of occurring. We also see that the probability of having five or more down-days, out of seven trading days, is slightly larger at 23% (or ~16%+5%+1%). 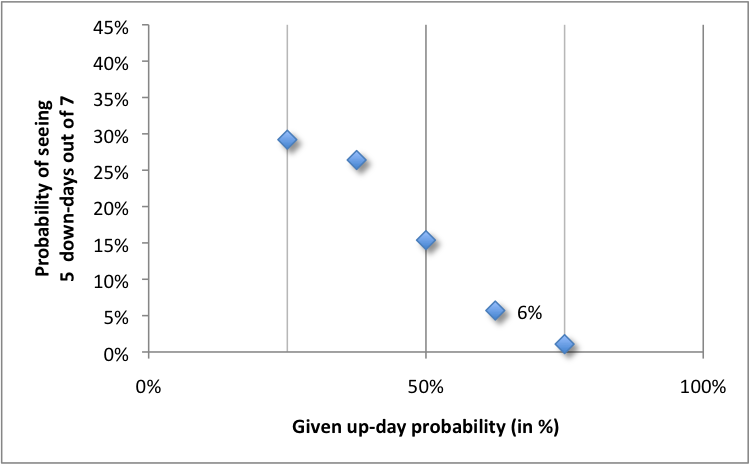 So we rearrange our likelihood distributions accordingly, and better understand our recent outcome taking this behavior (e.g., using the variance of a compounded Bernoulli distribution) into account. We initially stated that having 2 up-days out of the first 7 trading days is a 28% probability, but in the illustration below we can see how our new Bayesian likelihood levels look. It shows that we are instead closer to being in a slight down-streak period, characterized by up-day probabilities closer to 40% (less than a fair 50% chance of an up-day). 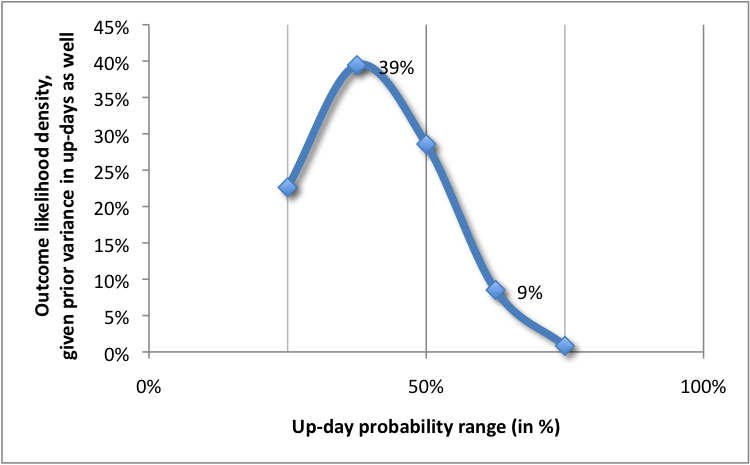 Recall that we said that was a 16% chance of seeing the Dow Jones Industrials drop on 5 out of 7 trading days, if we first assumed that each up-day probability was 50%. But per the chart above, if we see these 5 down-days (out of 7 trading days) we can instead better inform ourselves that we are more likely in a period that is not characterized with a daily 50/50 chance of going up/down. So instead of that 30% likelihood level afforded to a case where we have a 50% up-day probability, we instead suggest that 2014’s YTD performance has a higher 39% likelihood level of being from an underlying slight down-streak phase characterized with only about 40% probability of being up on any given day.