In this note we explore the actuarial concept of convolution between major period market drops, and daily market drops. All the statistics shown are for the closing level of the S&P 500. A major market drops are defined as one from a major market peak, to a major market bottom. So if there is intermediate market volatility, before the market makes a lower low from a prior high, then that decline would just be subsumed in the context of the wider market drop. Similarly, if there are multiple market highs that happen to be equal to one another (ties in highs are less likely in recent years at such high market values, but still possible), before the lowest future low, then only the most recent high is used to time the duration of decline. 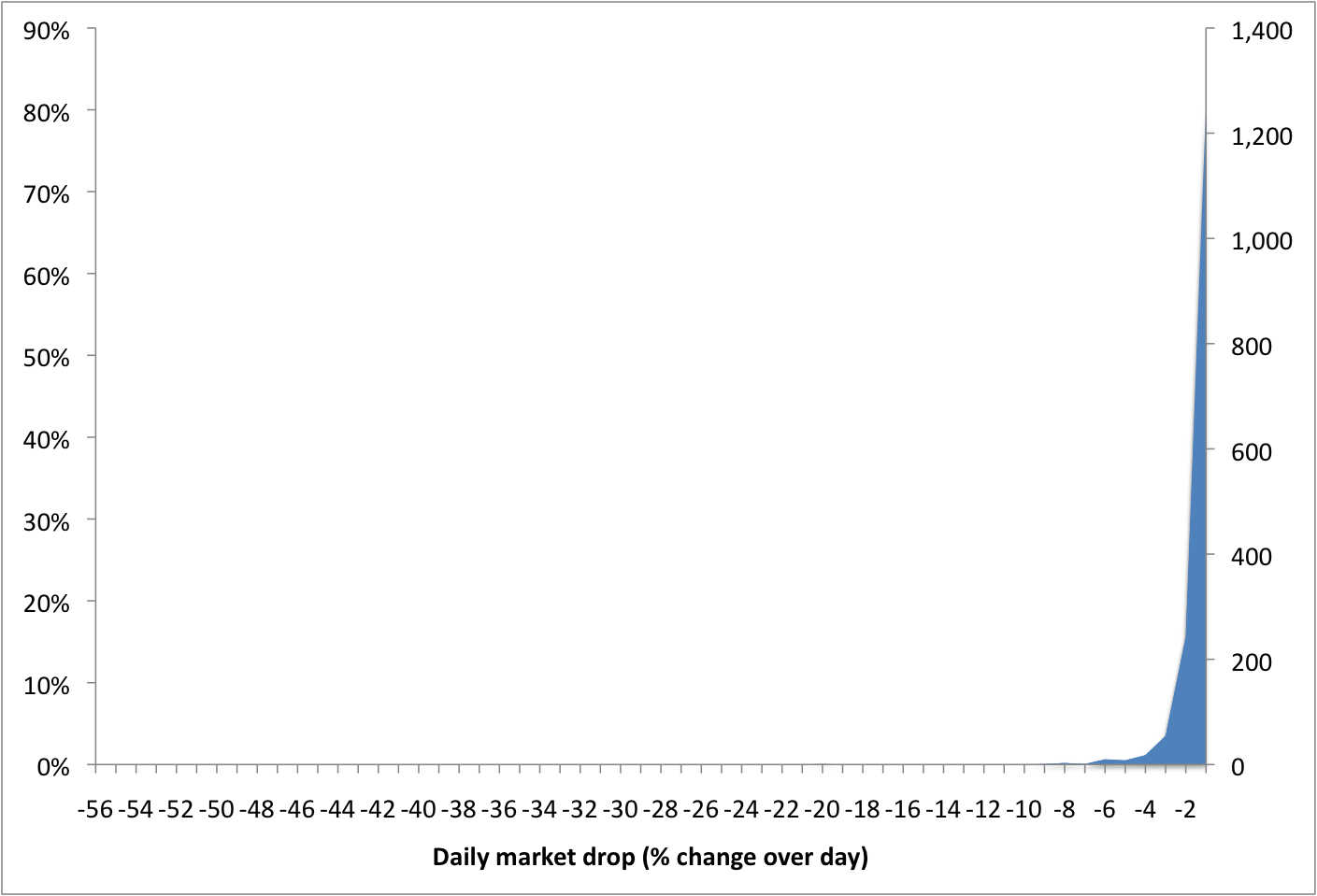 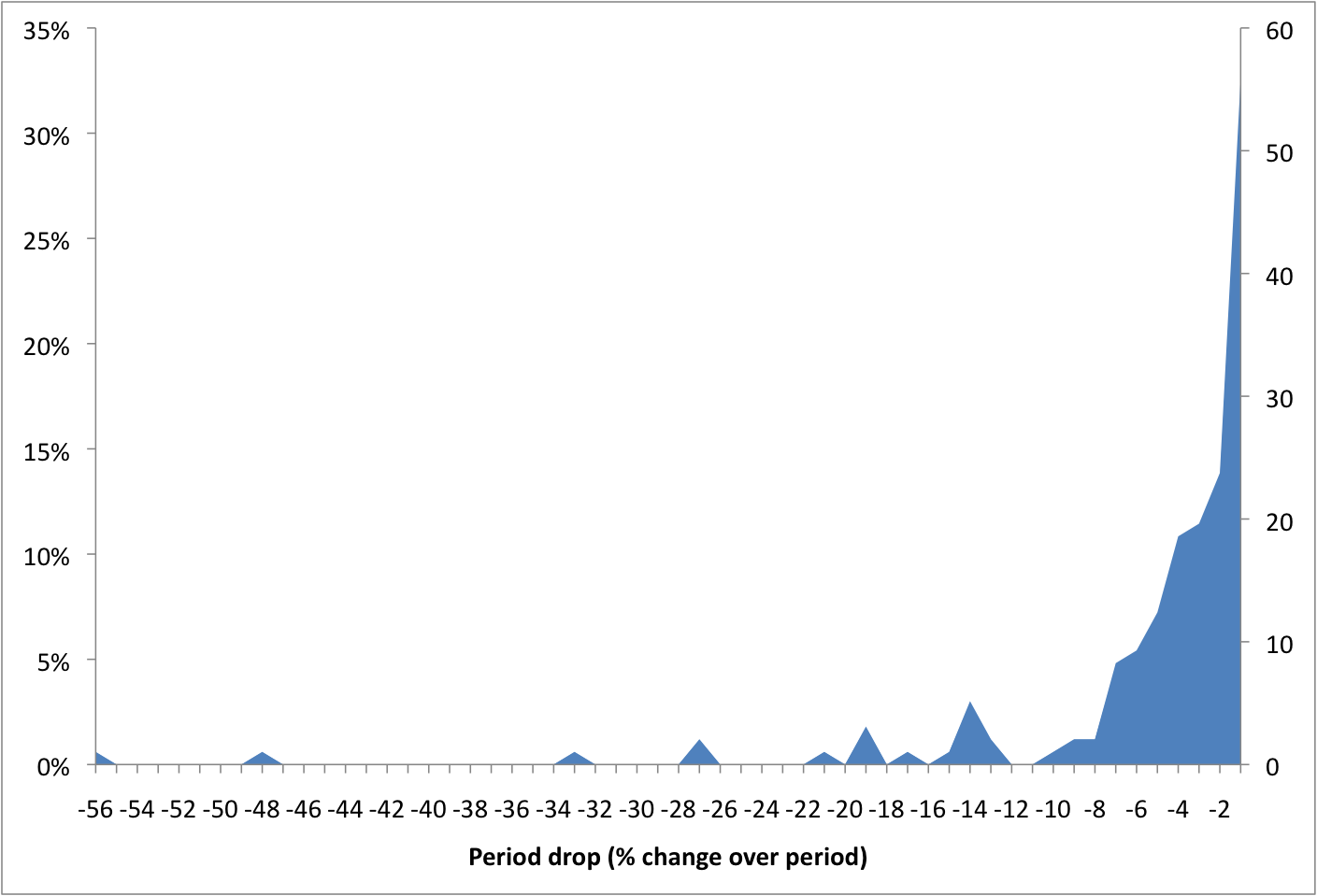 To understand how these two charts above relate to one another, let’s go through a few examples. Of the nearly 1,600 qualifying daily drop in the first chart above, we see that 1,250 (or 79%) are at -1. And of the 165 major period drops, we see that 53 (or 32%) are at -1. Now for a larger decline of -5 instead, this was only 1% of the 1,600 daily drops, but it is 7% of the 165 major period drops. And for an even larger drop of -10, we see it never occurs within a single day’s performance, but 1% of the qualifying major period drop is of that amount. Now these probability could be scaled by a third if we included market drops of up to 1% as well, instead of just at and beyond 1%. This scale would be slightly smaller for the daily market drops and slightly larger for the period market drops, though for the latter period we already noted that 30% of the trading day history is actually considered part of a major market drop. We are actually precisely in the middle of one of these truncated processes right now, with the S&P 500 after 4 trading days this year, is at less than 1% from the record close of 1848 at the end of 2013. Using the definition at the start of this note, we see in the chart above that since 1950, there was only 1 major market period drop of -10 (i.e., between -10% and -11%), and this occurred in the autumn of 1962. This period, shown on the chart, lasted 43 trading days in duration. So the daily pace of drop was a slight -0.2 (-10/43). 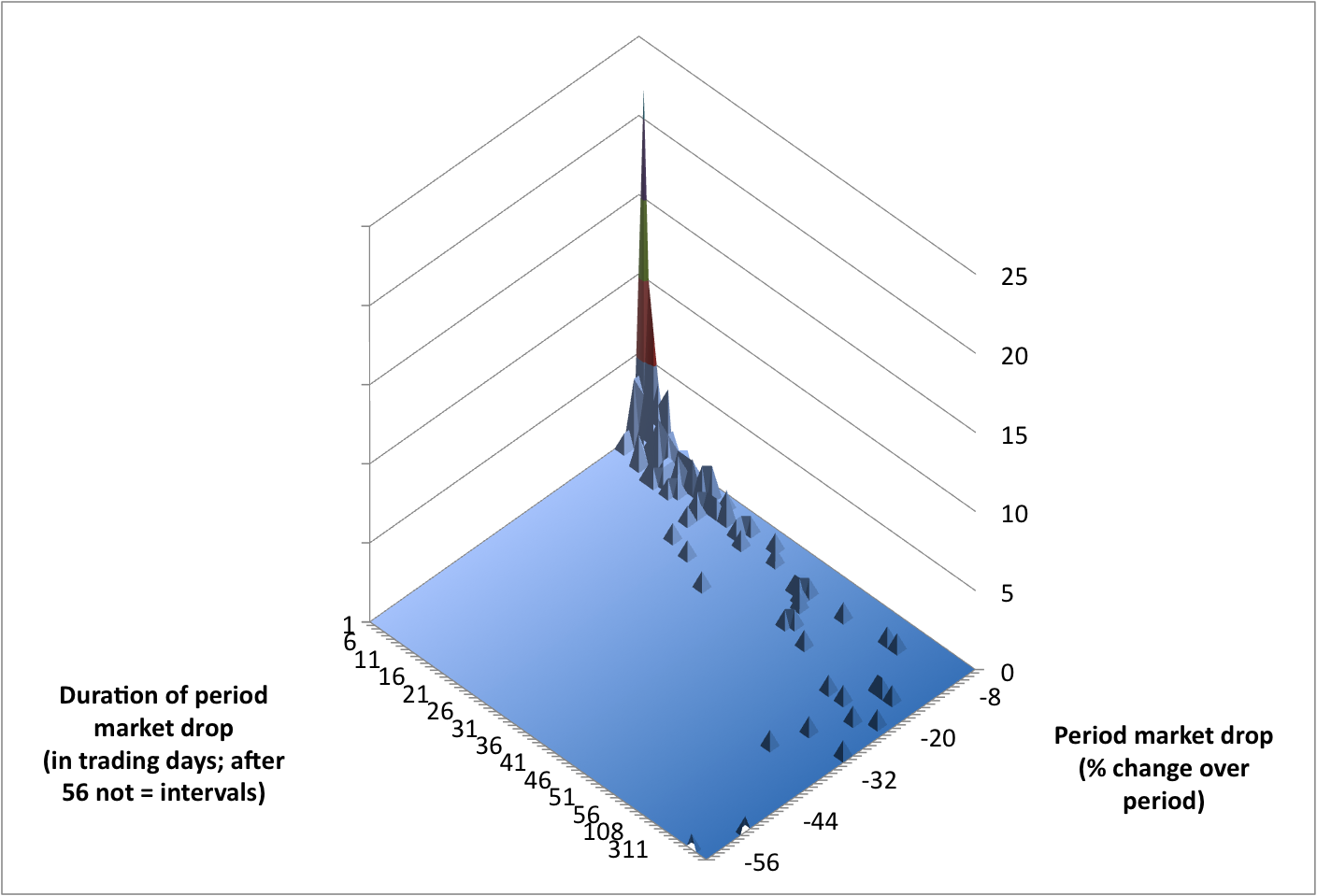 But the 12 (or 7% of 165) period market drops of -5 have all come from durations equally distributed between 1, and 26 trading days. And the resulting daily pace of drop comes to -0.5, again on a period weighted average. This -0.5 is much more rapid than either the -0.4 and -0.2 daily pace, for the -1 period market drop or the -10 period market drop, respectively.

These ideas follow the general non-linear convolution pattern we see across the entire historical data. Where of the nearly 1,600 daily drops, of -1 or greater, those in qualifying-period market drops tend to cluster into small period drops of about -1 or large period drop of -10 or greater. But the less discussed, medium period market drops of about -5, instead are more concentrated (and characterized by) a faster and more violent pace of daily volatility. This is important to consider as these major qualifying 2-week long market drops are much more likely to be experienced in any near-term projection: 7% of the periods are at a drop of -5, which only 1% of the periods (and too lengthy of one as well) are at a drop of -10.

Let’s switch topics and reflect some news we have going into the new year. Was recently interviewed by Forbes on recent research showing labor force distortions masking weakness in the official headline data. Also was cited by Jeff Sommer at The New York Times, in the paper’s year-end business review. And the blog was selected by the Federal Reserve economists in their monitoring for academic citations of RePEc research. For those new to the blog, one can see a list of some of the publicly featured citations on the Publications page. Finally, have just contracted to teach graduate statistics at Rutgers on the weekends this year, in addition to my current Georgetown teachings.

Federal Reserve Bank Transfers to the USA Treasury for 2013