The following is a partial summary of conclusions from our weekly fxempire.com analysts‘ meeting in which we share thoughts and conclusions about the key lessons we learned from last week’s action in global asset markets that matter for the coming week and beyond. These lessons apply to virtually all liquid global asset markets, particularly currencies, equities, commodities and bond markets.

Two of the most market moving events of last week that are likely to continue to exert bullish influence this week are:

Janet Yellin’s feeding the belief that Fed stimulus is to continue unabated longer than previously expected, possibly much longer. Even if it starts tapering QE, it can dampen rising bond rates via “forward guidance” about not raising them until economic growth and jobs data meet higher standards than previously used.

This means 7 speeches by FOMC officials (at least one per day) from Monday to Friday (EST), and the release FOMC minutes Wednesday, will have market moving potential if they provide any kind of surprise, pro or anti- QE taper.

It also means that any top-tier data thought to influence their thinking also has market moving potential if they provide any material surprises. The list includes:

As we discussed in depth last week here, the ECB’s should continue to ease, the only question is how and when. When someone as senior as ECB executive board member Peter Praet speaks, markets listen as his remarks are assumed to be an intentional message for public consumption. He sought to ease concerns that the ECB was running out of stimulus tools, and explicitly mentioned:

Inflation-anxious Germany has long opposed US-style sovereign bond purchases, and Praet acknowledged that the ECB’s charter prohibits it from financing governments. However he noted there are other ways for the ECB to intervene in markets to keep liquidity up and rates down. EUR losses were minimal, a response that suggests no one believes such steps are imminent.

Nonetheless, few believed the ECB’s rate cut last week was anything more than a symbolic “bandage on a shotgun wound,” that would do nothing to revive the EU’s (ex-Germany) stagnant growth and jobs picture, nor would it stave off potential deflation threats recently indicated.

The key point is, more radical easing is officially on the menu, despite the objections of Germany, Holland, Austria and other harder money funding nations.

The simultaneous rally in Japanese stocks and drop in the USDJPY indicates more than just rising risk appetite.

Over the coming months, the Federal Reserve reduce stimulus while the Bank of Japan will consider increasing it in order to offset the impact of the consumption tax.

The diverging monetary policies of the Fed and BoJ is another reason for why USD/JPY should be trending higher.

The Bank of Japan meets next week and no policy changes are expected. That means the continuation of the three week uptrend in the Yen’s counterparts like the USDJPY, EURJPY, and in Japanese stocks, will depend mostly on whether data from Japan’s big customers such as the US, Europe, and China beat expectations and so provide additional bullish fuel to the risk asset rally.

The most market moving event from the EU last week, and perhaps this week too, is that additional future ECB easing is likely on the way. The EURUSD hardly moved in the wake of the November 7th surprise rate cut, and EU stocks responded more that day to the strong US GDP report and its implied QE taper threat. In other words, markets didn’t believe the rate cut would have a material impact. More stimulus was needed, and more would likely be coming. See here for details on why.

Remember that the EU crisis comes from a combination of too much sovereign debt and bad bank loans, which forced GIIPS governments to go further into debt to help the banks, and the banks returning the favor by buying much of those bonds.

Thus the states, especially the GIIPS, and their banks, will stand or fall together.

As we discussed last week here, we believe the biggest under-the-radar “phantom menace” for the global economy is the coming ECB bank stress tests, which unlike the prior stress tests of recent years, will be conducted not as national PR stunts, but rather by the ECB, with serious intent to find bad banks and bad debts, so that the ECB or EU doesn’t get stuck with the cleanup bill, estimated at $50 bln (and these estimates tend to prove optimistic).

The danger lies in the bitter fight that will come over who pays and how, because it will reveal whether the EU is really ready to make some of the hard decisions it has avoided thus far, for example:

If there’s no agreement on how to deal with banks that fail the ECB’s stress tests, there won’t be any stress tests and the entire process of centralizing EU bank supervision grinds to a halt.

Whether or not they provide more lift to risk appetite in the coming weeks will depend greatly on whether at least some of the market friendly reforms are believed to hit within a matter of months as opposed to years, the usual time frame for enacting fundamental reforms in China

China’s Third Plenum meeting of senior leaders was supposed to herald an unprecedented wave of reforms, or at least the biggest one in decades. However after seeing markets disappointed by the lack of details released, China leaked further details. These included (via seekingalpha.com market currents for Friday November 15)

The good news: These indicate intention to move China firmly in the direction of becoming a more liberal market economy

The bad news: There was no explicit mention of improving transparency or reliability of economic data, nor any indication that these would be coming soon enough to influence markets in the near future.

Inflation pressures in all of the above mentioned economies remain low, even too low.

Better than expected UK data has raised tightening expectations somewhat, and the PBOC has allowed rates to rise.

Not surprisingly then, US, Japanese, and core economy EU indexes continue to march higher or hold steady near multi-year or all-time highs, while UK and Chinese indexes have drifted a bit lower over the past weeks.

The coming week’s trends for the main indexes will depend on whether the likely top market moving reports and events for the coming week surprise to the upside. Even if they don’t, many of these trends, as shown on the weekly charts below, are old enough that they can sustain 5-10% pullbacks without sustaining long term damage, hence our bias remains to the upside. 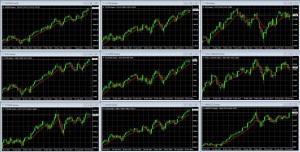 That means markets will be more receptive to bullish than bearish data.

One Additional Lesson And Conclusion

As we approach the yearend, we don’t think 2013 is going out quietly. We hope to have a year-end outlook article out this week, stay tuned. You’ll be able to find it here if you don’t see it in my usual online hangouts.

Reviewing the past week, the biggest lesson for the coming week and beyond is that we could be facing a very volatile year end.

Of course, expect global stock indexes and other risk assets to move with any materially bullish or bearish surprises to data that is believed to influence monetary policy of the Fed, ECB, BoJ, etc. Fed and ECB speculation will be particularly important for forex markets given that the USD and EUR are involved in over 80% of all currency transactions.

An Easy Introduction To Forex

For the second time since its publishing, I’m proud to announce a new introduction to forex video course just released, based in part on my book. It’s being offered for free for a limited time, and then they start charging for it. If you ever wanted a simple video intro to forex, this is your chance. See here for details.