The following is a partial summary of the conclusions from the fxempire.com weekly analysts‘ meeting in which we share thoughts and conclusions about the weekly outlook for the major currency pairs. 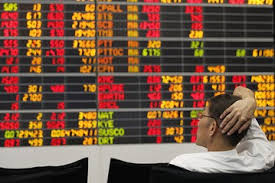 You can find these here.

Asia was mostly higher on a light volume technical bounce fed by bargain hunting after falling Friday, though caution ahead of a big US data dump and FOMC meeting restrained the rally. Japanese investors were also kept cautious due to a batch of big name earnings announcements.

European indexes closed modestly lower overall (but Spain was down hard) on caution ahead of the big US data releases, and also the FOMC meeting Wednesday that could provide the latest update on the prospects for continued or curtailed QE.

US indexes virtually unchanged, but still hanging near all-time highs, likely due to caution for the same reasons noted above.

A quiet Asian economic calendar, along with the lack of movement in US indexes Monday, and prevailing caution as noted above, kept Asian stocks mixed with mild moves up or down.

Most European indexes were solidly higher, as traders focused on earnings beats from big energy firms BP and Saipem, as well as from cellphone maker Nokia, though bank litigation liability worries limited the rally. An expected dovish FOMC statement that keeps QE flowing was no doubt also on traders’ minds.

As in Europe, US indexes were also solidly higher, and for the same reasons as seen in Europe:

Why not? If 2012-3 market action taught us anything it’s that QE trumps all, as US stocks have risen to historical highs despite data on jobs, spending, GDP and earnings reports that suggest a slow recovery from recession rather than historically growth or earnings.

Once again the EURUSD continued falling for its second straight day, despite:

The move lower would prove once again the benefits of watching key forex pairs that correlate closely with leading stock indexes. The EURUSD is the classic example of a forex pair that moves with the S&P 500, so divergences like this were a sign of what would happen after the FOMC statement Wednesday evening in the US, and on Thursday when Asian and European expectations for a dovish FOMC were not adequately met.

WEDNESDAY: FOMC Surprise was The Big News of The Week

Earnings, hopes for dovish FOMC kept Asia, Europe steady, but US stocks were down as FOMC statement disappoints. Europe and Asia were already closed, so these indexes would react Thursday. See here for details on what the FOMC said, market reactions, and lessons we learned for the future.

Asia was up on hopes for Dovish FOMC statement, Europe slightly lower as decent earnings and hopes for a dovish-enough-to-be-bullish FOMC statement outweighed by profit taking on concerns about strong EUR as USD undermined by Fed policy.

Asian indexes were all up strongly, on higher than normal volume, on hopes for a dovish FOMC statement that gave a green light for QE with no start of taper until well into 2014 or later.

European earnings weren’t good enough to lift most indexes higher, but they were good enough to keep them near their recent highs despite economic somewhat negative reports and news that were either in line or below expectations. Some traders warned that the month end could be a catalyst for profit taking, given stocks’ elevated levels and the overall less than elevated economic and earnings performance in Europe

US indexes fell as the FOMC statement was not as dovish as expected, even though the Fed said nothing about raising rates or tapering QE. What created that impression was:

Per Goldman Sachs’ Jan Hatzius. “…we expected the Fed to err on the side of dovishness and retain some version of this language.”

Typical of our QE dominated risk asset markets, any negative surprise on QE was all it took to send stocks lower.

Asian, European, and US indexes were all lower due to disappointments from both earnings and the FOMC statement, which was not as dovish as expected, and thus revived speculation about QE tapering starting earlier than the recent consensus date of March 2014. The US session hit its lows when the Chicago PMI reported its biggest monthly spike in over 30 years. This report is considered a reliable leading indicator.

Asian indexes closed mixed, with Japan down hard 0.88% on a batch of poor earnings reports from leading Japanese firms, but with Honk Kong, Shanghai, Korea and Bombay up, aided by good PMI report results, and by short term Chinese interest rates hitting a weekly low.

European indexes were mostly modestly lower, with Spain (- 0.70%) and France (- 0.62%) leading the way down, on new signs of earnings weakness from big names RBS and Renault. Per Thomson Reuters StarMine data, the week’s results now show 53% of companies on the pan-European STOXX 600 index reporting below expectations on earnings, and even more frequently on top line revenue. That’s adds a layer of gloom to this Q3 earnings season, because sustainable earnings growth must ultimately come from a parallel growth in sales. Earnings increases from cost cutting or stock buybacks do not reflect actual growth.

US indexes closed higher as US and Chinese manufacturing reports beat expectations. The morning’s ISM report, which showed manufacturing rising to its highest point since April 2011, despite the government shutdown, was the second better than expected report on U.S. manufacturing in two days after Thursday’s Chicago PMI report. The US data augmented the positive vibes from the Asian PMI reports from earlier in the day. There were positives and negatives buried within these figures:

-On the positive side, the South Korean trade report, aka the economic “canary in the coal mine.” Exports soared 7.3% year-over-year, smashing expectations of just 2.3% growth. Other strong PMI numbers from Asia confirmed Korea’s message of improving Asian manufacturing, and demand for those products. For example, the official and unofficial Chinese manufacturing PMI numbers beat expectations and signaled accelerating growth. In fact, most of the PMI numbers from Asia gave similar signals.

-On the negative side, Société Générale’s Kit Juckes noted that the “forward-ISM,“ which is the difference between new orders and inventories subcomponents of ISM, fell hard, sending an ominous signal