With global equities at record highs and the post-US debt ceiling deal rally likely to be mostly spent, you would think that markets are most likely to consolidate.

Not necessarily. This week’s calendar alone has an unusually high dose of potentially market moving events. A wave of belated US data releases, as well as some significant European and Chinese data, could provide volatility from all three regions.

In addition, we have the third week of the quarterly earnings reporting season. The first 3 weeks usually fix the tone, so the third week of earnings season is quite capable of driving markets higher or lower if a clear bullish or bearish theme emerges by Friday.

Technical Resistance With Stocks Near All Time Highs

When leading global indexes like the S&P 500, our preferred risk appetite barometer (see here for why), are at historical highs, our technical indicators are limited to a variety of momentum gauges that can only offer clues about the strength of that momentum and thus the likelihood of the current uptrend’s continuation barring some unforeseen obstacle.

As of Friday, the overall picture from a variety of momentum indicators is firmly bullish, in all time frames from 4 hour to one month candle charts. For example, let’s look at the daily chart below, which is representative of the other time frames mentioned above used by traders and investors with planned holding periods well beyond those of the short term and intraday traders. 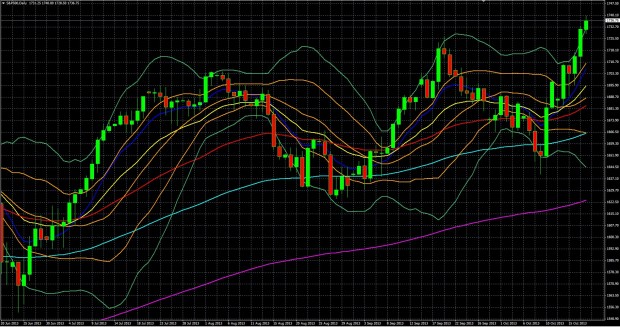 To keep the chart from becoming too cluttered, we’ve omitted the oscillators, which were in line with those shown. We note in particular:

Whenever stocks are hitting all-time highs, the natural question expectation is that indexes take some time moving sideways or lower, until fundamentals provide some new “Viagra” to stimulate new buying and justify a bullish further thrust higher.

Now that you’ve had your dose of Freudian allusions for the month, let’s look at the likely key fundamental drivers of market sentiment for the coming week.

As we’ve noted here and here, no one expects any tapering of Fed programs to keep rates low and liquidity high and flowing into risk assets due to the combination of:

So while markets may take some time consolidating, we’ve already seen that stocks have been able to grind higher without the usual supporting fundamentals like materially improving growth or earnings. However without some new ray of sunshine from earnings, a big data surprise from the wave of belated releases coming this week, the EU, China, or elsewhere, the more likely scenario for the coming week is to see risk assets consolidate their gains.

As we noted in our recent post on last week’s lessons for this week here, earnings thus far have been mediocre, with only the financial sector really looking good. Fortunately the tone for earnings season is not yet set until the end of the third week, this week. Expectations are for more of the same meh performance; however markets are expecting better guidance and analyst reports for Q4 and beyond.

Once again, markets will be especially focused on prospects for increased earnings via top line revenue growth because that indicates sustainable earnings increases, rather than earnings growth by non-sustainable sources such as cost cutting, share buybacks, or asset sales.

Q3 results are not likely to send the indexes higher.

At 14.6, the S&P’s forward price-to-earnings ratio is near its highest in four years and is just below its long-term mean of 14.9. The P/E multiple has risen throughout the year, however earnings growth has stayed flat, and forecasts expected to fall in coming months.

The end of the 16 day federal government shutdown means we have a wave of belated but still noteworthy data coming from the reopened US government. Most important will be the monthly jobs and related reports, and home sales Monday and Tuesday. There will be other US home sales data, durable goods reports, and U of Michigan consumer sentiment later in the week.

Note that certain kinds of data, such as inflation, will be subject to reporting errors in the coming months due to the government shutdown

In addition to the Monday existing home sales and Tuesday US jobs reports:

The non-farm payrolls and unemployment rate monthly reports are typically market moving, however the influence of these is harder to call. On one hand these could still be market moving because:

For more on the coming week, see here.

More Than 50% of Americans View the IRS Unfavorably

More Than 50% of Americans View the IRS Unfavorably