It depends. On what? Whether a reduction in the amount by which Federal Reserve purchases of securities increases each month represents a tightening in monetary policy depends on how much loans and securities on the books of private depository institutions (i.e., commercial banks, S&Ls and credit unions) change each month.

With regard to its impact on domestic nominal spending on goods, services and assets, both physical and financial, in theory it makes no difference whether credit is created by the Fed or by the depository institution system in a fractional-reserve regime. In both cases, credit is being created figuratively out of “thin air”, which implies that the recipient of this credit is able to increase its current spending while neither the grantor of this credit nor any other entity need restrain its current spending. 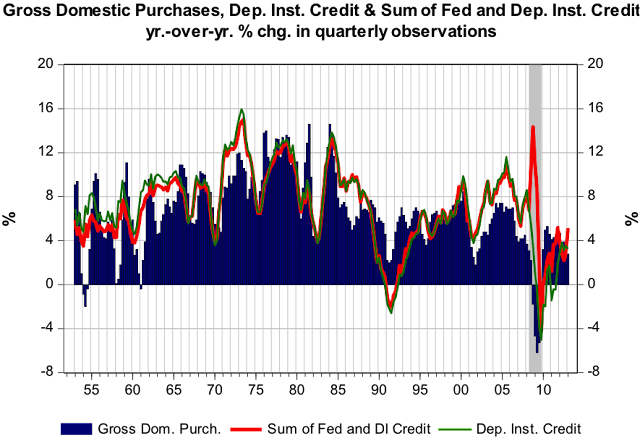 The reason the inclusion of this subperiod (shaded in Chart 1) reduces the contemporaneous correlation between the two series is that the sharp year-over-year increase in Federal Reserve credit that started in 2008:Q3 and reached its zenith in 2008:Q4 was related to extraordinary increased liquidity demands by financial institutions and funds advanced by the Fed to AIG. During this period, financial institutions were reluctant to lend to each other in the ordinary course of business. In response to this, the Fed threw open its credit facilities to depository institutions and other financial intermediaries in order to prevent a wave of failures throughout the global financial system. In the event, the increase in Fed credit was not being used as “seed” money by depository institutions to create multiple amounts of new credit. Rather, this Fed credit was just being used, at best, to fund outstanding credit previously granted by depository institutions. The Fed credit extended to AIG was used to “make whole” AIG creditors, not for AIG to expand its earning assets (loans and securities).

Since the onset of the financial crisis in late 2008, the Fed’s contribution to the SUM of Fed and depository institution credit has increased significantly, as shown in Chart 2. The rebound in the credit SUM beginning in 2010 has been dominated by Fed credit creation. If Fed were to begin tapering its securities purchases later this year, as Fed Chairman Bernanke indicated at his June 19 news conference is the current conditional plan (conditional on economic activity unfolding according to the Fed’s current forecast) and if depository institutions did not add to their holdings of loans and securities commensurately, then growth in the credit SUM would slow, which, in my view, would represent a “tightening” in monetary policy. 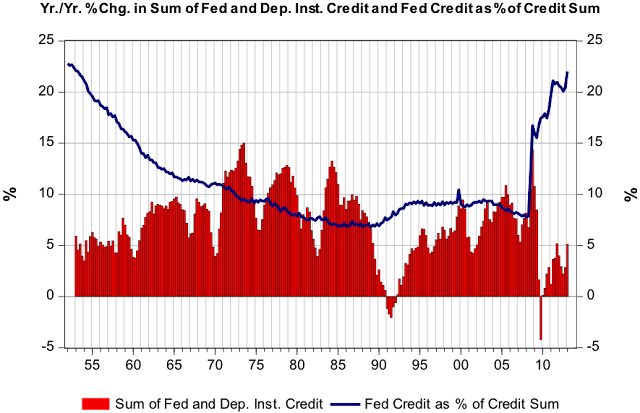 Commercial bank credit, the dominant source of depository institution credit, contracted in May at an annualized rate of 1.8%. The June weekly data, however, suggest a resumption of growth in commercial bank credit. The latest Federal Reserve survey of bank lending terms showed that there was a significant increase in the percentage of survey respondents stating that their institutions had eased their lending terms. With house prices again on the rise, future home mortgage write-offs by depository institutions will continue to diminish.

This will enhance the already high (in general) capital ratios of these institutions, thus enabling them to increase their loans and securities. So, it is likely that depository institutions will be stepping up their credit creation as the Fed begins to moderate the pace of its credit creation. Let’s contemplate some numerical scenarios for the behavior of the SUM of Fed and depository institution credit in 2013. Given 2013:Q1 actual (until revised) data and assuming that Fed credit increases by $85 billion per month over the remainder of the year (i.e., no tapering) while depository institution credit remains frozen at its 2013:Q1 level, then the credit SUM will have grown by 7.1% Q4-over-Q4 in 2013. Call this Scenario I. This compares with 2012 growth of 2.8% and 1953 – 2012 median annual growth of 7.25%. In Scenario II, assume that the Fed begins to taper it securities purchases at the beginning of 2013:Q4, cutting its current purchase rate of $85 billion-per-month in half.