You know the old argument for buying land: They’re not making any more of it. The twin credit and housing crises sent land prices plummeting, and the share prices of developers like Tejon Ranch (TRC) and Amrep (AXR) plunged with them. Both stocks are trading well below the peaks reached near the top in housing. The declines have been so dreadful, in fact, that even the SPDR S&P Homebuilders exchange-traded fund (XHB) has comfortably outperformed the two landowners. 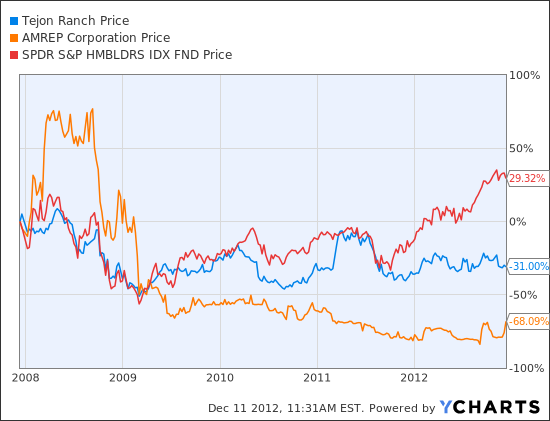 James Grant, editor of the widely respected advisory letter Grant’s Interest Rate Observer, argues in his latest issue that the selling has been overdone and that Tejon and Amrep are due to reverse their steep drops. His case rests in part on a robust historical pattern exhibited by the housing market. As night follows day, home prices rise first in a recovery, and only then do land prices start moving up.

The first phase is occurring, Grant observes. Home prices showed a 3% year-over-year increase in September, the fourth straight month of gains. And the upturn in the Case Shiller Home-Price Index is being pushed along by a fresh construction boom. A key piece of data for Grant is housing starts. After crashing to an annual rate of less than 500,000 in mid-2009, a low since records began to be kept in 1959 and well below the long-term average of about 1.5 million, starts have climbed back to a shade under 900,000. 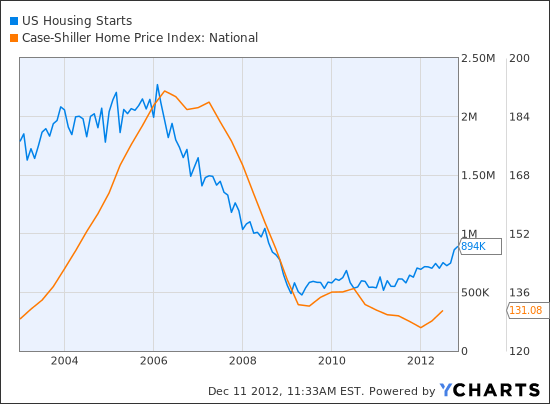 US Housing Starts data by YCharts

That is likely to cause builders to shop around for new land to put up their next batch of homes, perpetuating the historical pattern, Grant predicts. So far, however, the market in land doesn’t reflect this. While housing activity has entered a new growth phase, he writes,

“in many markets, land prices, though off the bottom, are still in value territory.”

So, in his view, are the stocks of Tejon, which owns a massive tract north of Los Angeles, and Amrep, which has sizable acreage around Albuquerque, New Mexico, and smaller parcels elsewhere.

The long and steep declines have sent the companies’ valuations, as measured by price to book value, to multi-year lows. Tejon’s share price has fallen to less than two times book value from more than 6 in the summer of 2005. Amrep is far cheaper, trading at roughly 0.8 times book, well off the 4.5 multiple of early 2007. Those mid-decade ratios seem all the more inflated when you consider that the housing market then was just beginning to roll over and collapse, meaning that the stocks were trading at high multiples of peak asset values. 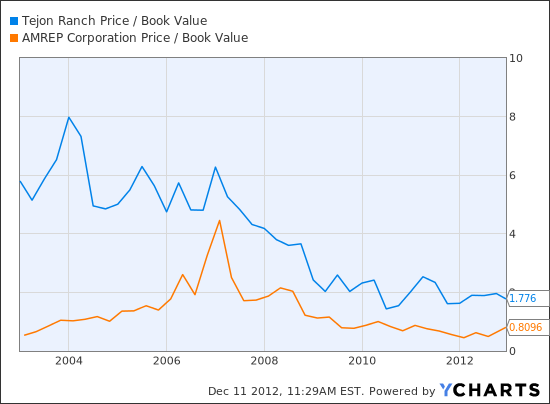 Impediments remain to the continued rebound in housing, Grant acknowledges. The market continues to depend on federal subsidies, which are always susceptible to the whims of politicians. Other sources of concern that he cites include

“the continuing credit shyness of America’s once-bold bankers, the unresolved problem of American leverage and the still substantial overhead supply of houses awaiting sale as the result of mortgage foreclosures.”

He nevertheless declares himself “bullish on Mother Earth,” and with Tejon and Amrep trading at historically low multiples of historically cheap land prices, he is also bullish on the two stocks.