The Week Ahead: The Same Old Fed?

As I wrote in my preview two weeks ago, we needed to expect a period with more noise than signal. The post-election posturing and the effects of Sandy have left

investors with less real data than usual. In the next few weeks we may finally get some clarity.

This week may provide better policy definition from the Fed. Despite the Bernanke-era emphasis on policy transparency, the message from the Fed still seems far from clear.

Perhaps because it fits a convenient story much financial commentary puts a strange twist on current policy. This was partly due to the election, where the Fed became an issue. This distraction for investors is over. It may now be easier to emphasize the facts.

Here are some common mistakes by the Fed punditry:

These are all incorrect.

I’ll offer my own take on what to expect from the Fed in the conclusion. Let us first do our regular review of last week’s news and data. 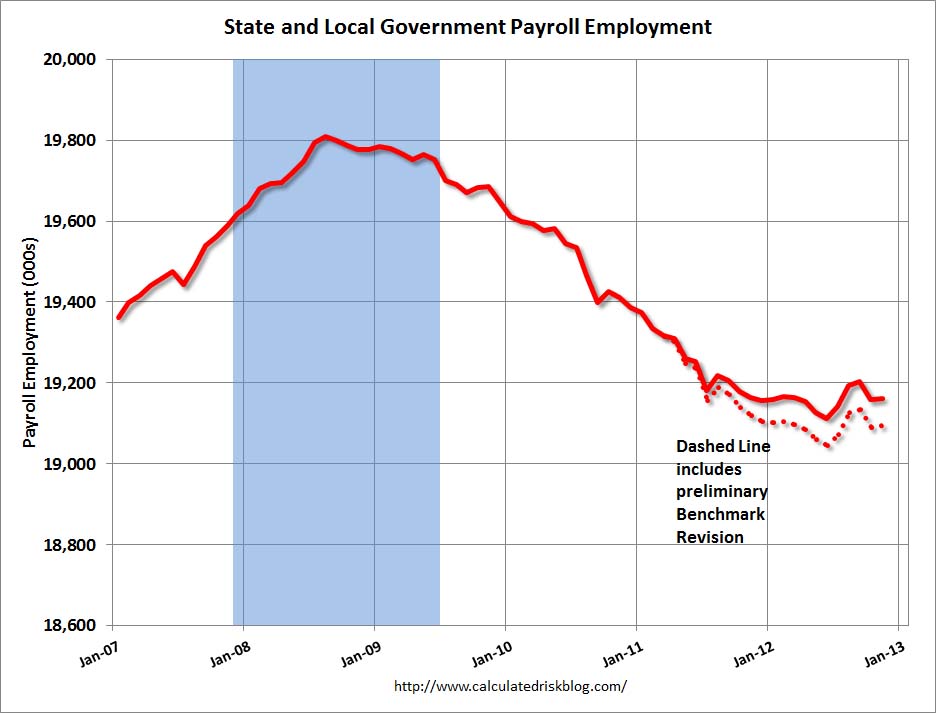 There was some bad news last week, and some of it is important.

This week’s ugly award goes to the worst-run companies of 2012, courtesy of Scott Rothbort. Scott has a passion for education, sharing his knowledge and expertise with Seton Hall students in addition to running his own investment firm. He is a colleague at Wall Street All Stars, where he writes a great daily market column, My Gut Feeling, which draws upon his extensive experience and finger on the pulse of the market. I do not want to slight any other colleagues, because it is a great group. We have a vibrant daily discussion of the market. (Email me if you want a trial or discount to the site).

Scott’s choices are based upon sound criteria, and he shows prior membership from 2006. Great fun, and useful!

Despite the recent media blitz from the ECRI, there is no evidence of an imminent recession concern.

Doug Short has excellent continuing coverage of the ECRI recession prediction, now over a year old. Doug updates all of the official indicators used by the NBER and also has a helpful list of articles about recession forecasting. Doug’s latest commentary questions the ECRI definition of sales. He remains open-minded about the upcoming evidence.

For the current time period to be viewed as the start of a recession, we would need to have a significant decline in the economy. Then the NBER goes back and dates the start of the recession at the last peak. As yet we have only small declines, and only in some indicators. We shall see.

RecessionAlert uses a variety of different methods, including the ECRI, in developing a Super Index. They also offer a free sample report. Anyone following them over the last year would have had useful and profitable guidance on the economy. Dwaine Van Vuuren notes that the effects of Sandy have pushed industrial production into recession territory, sending the current chance of a recession over 11% according to one of his indicators. His latest article emphasizes his short-term indicators. He is not identifying a recession in any of the various covered time frames.

Readers might also want to review my new Recession Resource Page, which explains many of the concepts people get wrong. Newly added to the list of errors this week was the popular but bogus 100% recession chart. Amazingly, this is still getting buzz. Confirmation bias in action! Our “Felix” model is the basis for our “official” vote in the weekly Ticker Sense Blogger Sentiment Poll. We have a long public record for these positions. This week we switched to a bullish position, but the forecast is still cloudy. These are one-month forecasts for the poll, but Felix has a three-week horizon. Felix’s ratings stabilized at a low level and improved significantly last week. The penalty box percentage measures our confidence in the forecast. A high rating means that most ETFs are in the penalty box, so we have less confidence in the overall ratings. That measure has moved to the very top of the range. This means that we do not have a lot of confidence in the current bullish rating, nor did we in the former bearish rating. It has been a close call over the last few weeks. “Abstain” might be more accurate.

This week brings some economic data, but not the most important reports.

There will be continuing non-stop speculation, attempting to parse the words of anyone who will discuss the fiscal cliff. None of this will be very helpful. The progress is happening behind the scenes.
Trading Time Frame

Felix has moved to a more bullish posture, but it is not yet reflected in trading accounts. It has been a close call for several weeks. Felix has done very well this year, becoming more aggressive in a timely fashion, near the start of the summer rally, and getting out a couple of months ago. Since we only require three buyable sectors, the trading accounts look for the “bull market somewhere” even when the overall picture is neutral. The ratings have moved much higher in the last two weeks. We are now completely flat in trading accounts, but expect to add positions this week.

I want to emphasize that this is the approach I take for programs with a long-term orientation. It is entirely appropriate for long-term investors to buy when traders are selling. That is often when bargains are found. The smart alec’s who call this “dumb money” should spend some time reading the wisdom of Warren Buffett. This is an important time for investors with long-term goals.

Individual investors too frequently try to imitate traders, guessing whether to be “all in” or “all out.” This usually leads to mistakes in market timing. There are plenty of stocks at attractive values right now. Here is what to think about:

Final Thoughts on the Fed

I expect the Fed to replace “operation twist” with a new asset purchase policy, keeping the monthly target of $85 billion. That is only the start.

It has not worked.

In fact, the Fed Chair’s statements have actually fostered the misperceptions listed in the introduction. It is time for clarity instead of Fedspeak:

Since I do not have Bernanke’s ear, I am not expecting more clarity. For those who understand Fed policy, this is an opportunity. If you do not wish to fight the Fed, the first step is to understand the policy. How else can you know what you are not fighting??
A Final Final Thought
The fiscal cliff participants continue to prove in public that they are bargaining hard. It does not matter that Congress took a long weekend. I am still hopeful for a pre-Christmas resolution on the tax issues with overall debt questions coming later. There will be some firm guidelines, but the opportunity for Congress to participate in the details.
The market gyrations will continue, but do not expect meaningful cliff news this week.
Previous Post

Zig Ziglar: See You at the Top

Infographic of the Day: Chinese Investment in North America

Infographic of the Day: Chinese Investment in North America