Durable Goods Correlate to Stock Market, But the Fed is the Real Reason for the Rally

Durable goods orders rose 8.7% in February versus January on a nominal, not seasonally adjusted basis. The mainstream media reported only the 2.2%

seasonally massaged increase, which missed the consensus expectation of 2.9%. The actual, unadjusted increase was the best February gain since February 2004, so the actual data could hardly be read as disappointing. Last February, the month to month increase was only 0.90%, and the gain in February 2009 was only 2.8%. The average February gain over the past 10 years was 5.2%. Any way you slice it, this was a very strong increase. Once again, the use of seasonal adjustments obscures the truth and sends the market racing to the wrong conclusion in the knee jerk reaction.In nominal terms, durable goods orders are now up 17.8% year over year. The rate of increase has actually been increasing lately.

In real, inflation adjusted terms the increase was “only” 14.4%. That’s still a huge jump. The problem is in the big picture. While durable goods orders have had a strong cyclical increase, they have only recovered 60% of the loss incurred during the recession. The idea of US manufacturing making a comeback is a myth. This myth may have arisen only because the rest of the world is doing worse under austerity than the US is doing under ongoing stimulus spending and Fed propping. No doubt if the Federal government ever decides to actually reduce the deficit, the meager growth the US economy has shown would stop dead and reverse. Furthermore, if US companies really are moving production back home and adding to capacity in the process, based on the long term trend of orders, they are headed for another bust. It’s only a question of when. 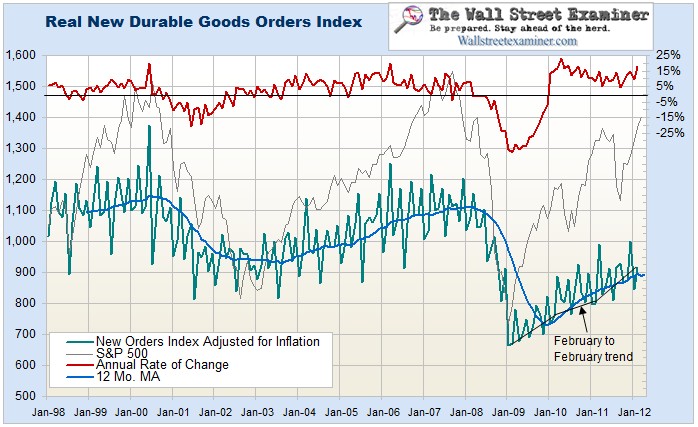 The chart shows just how sick the secular trend of the US manufacturing economy is. However, that does not matter to the stock market, which is perfectly capable of increasing its margin away from the trend of manufacturing in the US due to the financialization of the economy. Durable goods orders are at best a concurrent indicator of stock market trends. Orders lagged the downturn in stocks 2007-08.

In fact, this measure of manufacturing did not collapse until after the Federal Government and the Fed panicked in 2008 and pulled $700 billion out of the economy in raising TARP and funding it through debt sales, which the Fed then funded through a variety of propping programs that were themselves funded by the Fed pulling cash out of Primary Dealer trading accounts. The Fed’s withdrawals of dealer funding precipitated the stock market collapse, and the economy followed.

As I have shown throughout the 10 years I have been directly tracking this, the Fed has near absolute control over both the US stock market and the economy based on how much cash it pumps into Primary Dealer trading accounts. This indicator is a proprietary measure of the amount of money the Fed pumps through Primary Dealer accounts. The data is all available from the Fed in various places. I just accumulate it and publish it weekly in the Wall Street Examiner Professional Edition Fed Report .

The Fed and the Stock Market- Click to enlarge 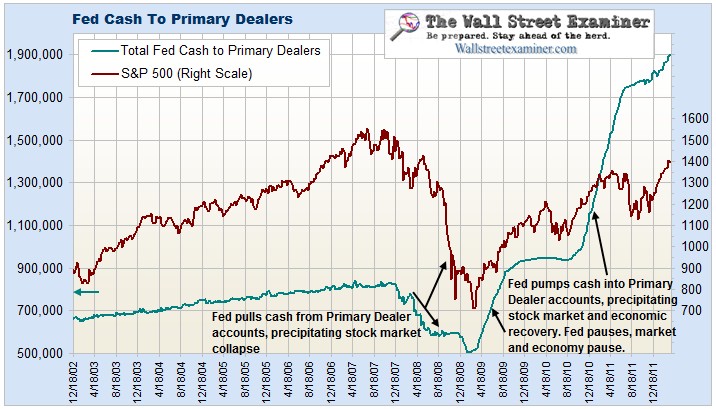 When the Fed buys securities from the dealers it pumps cash into their trading accounts, the market rises and the economy tags along. When the Fed drained money from dealer accounts, especially in the face of the Treasury selling $700 billion in new debt over the same time window, the economy collapsed. I’m well aware that correlation doesn’t imply causation. In this case, the cause and effect are easily observed. The effects of the Fed’s actions are completely predictable now, just as they were in 2008, when I warned that what the Fed was doing would precipitate a crash. While the mainstream gives Bernanke credit for averting an even worse fate, the facts clearly show that his and Henry Paulson’s panicked actions (not to mention then NY Fed President Tim Geithner) triggered a far more precipitous break than might otherwise have occurred.

Here’s an all in one chart that uses a slightly different measure of Fed actions that doesn’t capture all of the impacts of the nuances of various Fed policy measures, but it’s clear enough to give you the idea.

Had the Fed not pulled cash from the SOMA in 2008, it is highly likely that the market would not have crashed and the economy would not have collapsed. The glide path would have been much smoother. Once the Fed realized its error and resumed direct pumping to the Primary Dealers, the market and economy recovered to the trend level it would have been on. As long as the Fed keeps the Primary Dealers flush with cash, the market and the economy will respond in kind. Financial assets and commodities will continue to rally and the economy will follow along in a slow growth path.

At some point, however, inflation will tie the Fed’s hands. Will it be this summer, when the Fed’s MBS purchase program ends? Then what? A wide variety of inflation measures, including especially commodity prices, which the Fed pretends to ignore, will hold the key to whether the Fed can continue to artificially drive up asset prices in a way that promotes false and otherwise unsustainable economic growth.

Michael Pettis to The Economist: Put Up or Shut Up