The latest January trade data of China showed the broadest measure of China’s global trade surplus fell to a several-year low to around 2.7% of GDP.  Export also collapsed to a negative 0.5% year-over-year in January, down from +13.4% in December.  Imports looked even more dire with a 15.3% year-over-year decline. 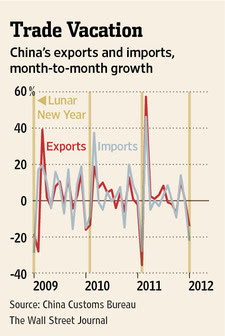 Earlier this month, the IMF already issued a report on China stating that real estate remains the greatest domestic risk to China, and in the most sever scenario, China’s growth could drop to 4%, less than half of the trend for the past decade.  According to the IMF, in this scenario, a downturn of the property market causes a sizable portion of credit to local government financial platforms, the real estate sector, and small and medium enterprises to become impaired. 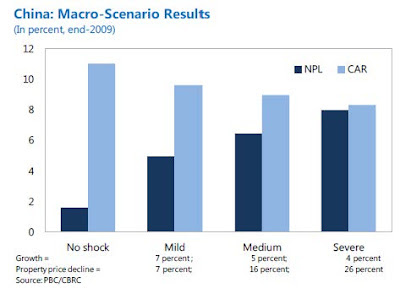 With major trade partners battered by recession, the new trade data seem to give credence to a China hard-landing crash scenario by some forecasters.  However, it remains difficult to conclude a definitive pattern yet as the Chinese Lunar New Year fell in January this year (vs. February in 2011) distorting the prior year and month-on-month comparison.

reported that based on preliminary customs data, China’s copper imports were 413,964 tonnes, an increase of 13.6% from January 2011. Crude oil imports also rose to 23.4m tonnes, equivalent to 5.5m barrels a day, compared to an average of 5.1m barrels a day last year.  In the next couple of years, many expect China may well overtake the U.S. as the world’s biggest importer of oil.

Despite the mixed bag of data points and opinions, one thing we could say for certain is that the era of consecutive annual double-digit Chinese GDP growth  has most likely come and gone.

China is starting to shift from the construction infrastructure growth stimulus model like the one implemented in post-2008 financial crisis, to soft infrastructure—welfare, education, and alternative energy, etc.—to encourage domestic consumption, which is much harder to execute and much slower to see the results showing in the GDP.

Furthermore, China is in the year of leadership transition which means less drastic and slow policy change by the incumbents as well as the new leaders, which would also translate into slower growth, at least in 2012 and into the first half of next year.  Meanwhile, the new leadership lineup, with a diverse and prestigious educational and professional background, is quite positive for China’s future.

For now, the IMF expects the growth of China to still stay above 8% in 2012-13 under its base scenario, noting that “China has room for a countervailing fiscal response, and should use that space.”

As the chart above from the Center for Geoeconomic Studies points out, with its huge population, production and consumption, the Chinese economy is now so large that it will continue to make a significantly rising contribution to global growth even if its own growth rate continues to fall off moderately.
Related Articles

Abandoning the Welfare State in Europe?