Toyota’s Doing Fine, Except for the Yen

2011 was middle school all over again for Toyota Motor (NYSE:TM), the year the ace student spent getting the crap beaten out of it by losers benefiting from growth spurts. General Motors (NYSE:GM) and Volkswagen – competitors that seemed so insignificant two years ago – gleefully trounced Toyota in sales milestones, causing Toyota to lose its top dog credentials.

2012 will be better for Toyota, mainly because a freak repeat of the earthquakes, nuclear disasters and floods that plagued the company’s earnings last year is highly unlikely. Whether it will be a better year for Toyota shareholders is less of a sure thing. Investors aren’t exactly clamoring for the shares yet. 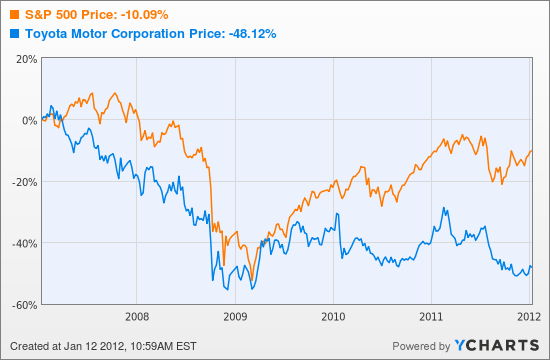 This year’s albatross for Toyota involves the soaring value of the yen, a man-made disaster over which Toyota has no control. Thanks to weak economies outside of Japan, the yen has been gaining value against the dollar, the Euro and other important currencies, as seen here in the dollar’s plunging value against the yen. 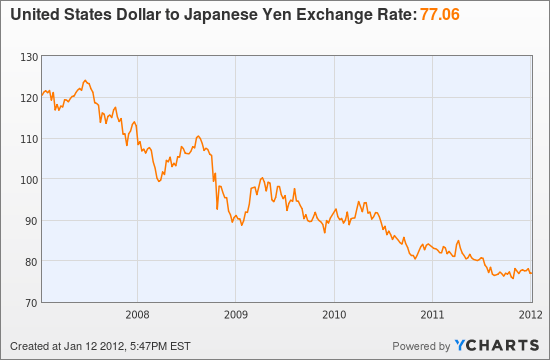 It’s not a good scenario for an exporter like Toyota, which pays for much of its car production in high-valued yen and sells most of its cars in lower-valued currencies. Either customers pay more for a Toyota than the equivalent Chevy or Volkswagen, or Toyota eats some of the costs. For the most part, Toyota has been eating costs. 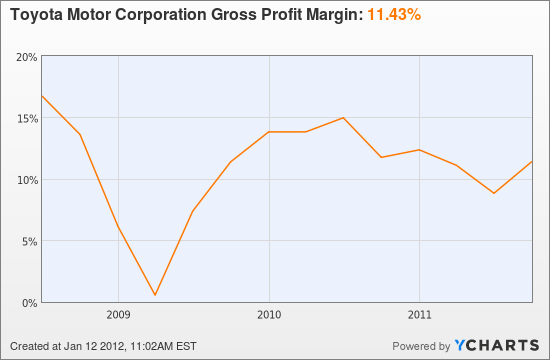 That helps keep Toyota competitive but does little for its bottom line. A couple of the dips in the 2011 profits reflect one-time (surely) natural disasters, but it’s easy to see that Toyota’s trouble started even before Mother Nature got involved. Recalls hurt sales in 2010. 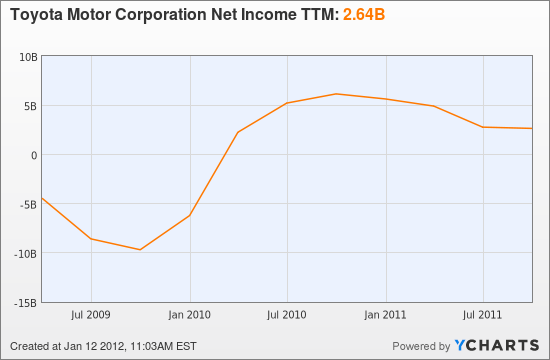 Despite its difficulties, Toyota does have a few serious advantages that may yet make shareholders happy. Those recalls didn’t seem to hurt its long-term image in the U.S., as Toyota’s Camry, Prius, Tacoma and Sienna models are still the best-selling vehicles in their classes. The company can ease yen problems by exporting from its non-Japanese factories. (And make Alabama extremely happy in the process.) And Toyota forecasts a 20% rise in revenues this year, albeit from a crippled base. 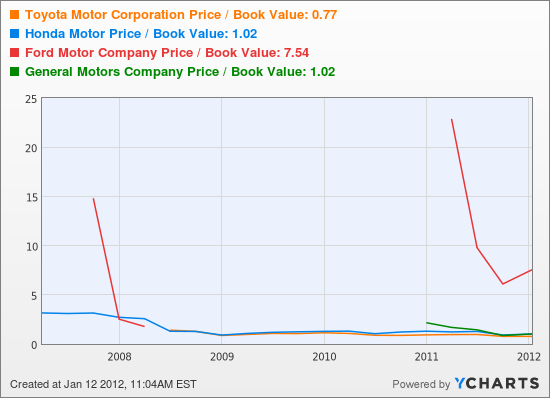 Really, investing in Toyota these days is a bet that the world’s economies will soon recover. A rip-roaring rebound in the U.S. or Europe would drive down the yen value and position Toyota — and probably its shareholders — to pocket a lot more money on every car it sells. Without such revaluation, shareholders can probably expect a slow slog back to the top of the class.

The Great Geopolitical Swing of 2012

Ode to Censorship and SOPA

Ode to Censorship and SOPA