Sometimes it pays for equity investors to think like lenders – if we put our money into this company, can it afford to pay us back? And thus today we hear from a hard-bitten debt analyst, James Goldstein at CreditSights, about the deteriorating condition of Sears (SHLD).

If you are bargain shopping, and still believe the 2004  BusinessWeek cover that asked rhetorically whether fund manager Eddie Lampert was “the next Warren Buffett,” by some measure Sears could look attractive. It takes retail sales to make a retailer’s profit, of course, and on a price-to-sale basis, for instance, Sears screams cheap. 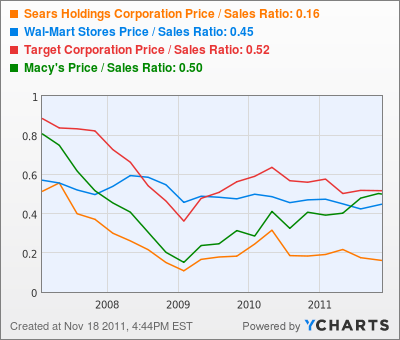 If only Lampert had a notion of how, or the will, to turn this beast around – under him the company has suffered a revolving door to the management suit, declining same store sales and disinvestment that has left many of its Sears and Kmart stores looking very tired – one could get excited by the price-to-sales ratio. But really, most of what the “Next Warren Buffett” has done is financial, dissipating cash to fund share buybacks and recently running up the company’s debt. 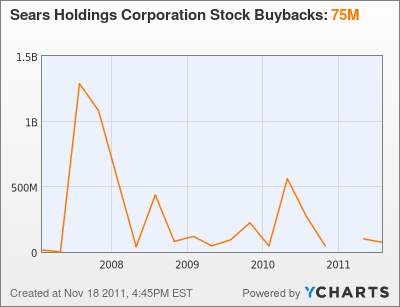 “While the topline is merely weak,” analyst Goldstein reported after 3Q results last week, “performance at the bottomline was crushed.” Goldstein noted a “sizable deterioration in credit metrics,” including some Sears debt trading at about 78 cents on the dollar. Eeek.

Sears has been counting on strong 4Qs to bail it out of the crummy preceding nine months. But Goldstein seems to think that won’t be enough going forward: “Cash from operations – even in the fourth quarter – will be insufficient to pay down short term debt (which ahs blossomed to $2.2 billion) in the post holiday season.”

What is Eddie Lampert thinking? He issues annual letters to shareholders in which he shares many thoughts, including this year deigning to share some of his economic wisdom on job creation policies. But how he actually plans to turn Sears around remains a mystery. Online sales? Sure — just run Amazon (AMZN) out of business. Dominate appliance sales? No problem — except consumers aren’t buying many washers and dryers right now.

In truth, there may be no turning around Sears. Remember, Lampert bought Kmart out of bankruptcy, and the market decided he’d invented sliced bread, seeing real estate plays and other possibilities where it had only years earlier seen hopelessness. And then he used Kmart hyped-up shares to buy Sears, and the market expected still more miracles, rather than two drunks trying to hold each other up. Note how Sears shares diverge from the line of this U.S. retail sales chart. 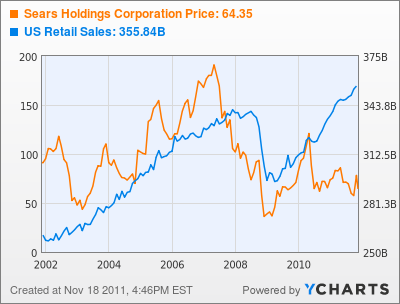 Golstein, the analyst, is warning bond investors to steer clear of Sears. And it seems that’s good advice for equity investors, as well.

Job Situation: A Hollowed Out Middle