Was the Rally Just a Melt-up?

Editor’s Note: This was originally posted October 30.  It is quite interesting to compare this analysis to what has happened in the ensuing week.

John Mauldin, for whom I have a great deal of respect, put forth a very convincing and enlightening argument last weekend in his free Thoughts from the Frontline newsletter. I’m going to try to summarize his argument as succinctly as possible for my readers, but do note that the credit for this information goes to him.

Basically, his argument helps explain what stretched out the historic melt-up rally in equities (the Dow Transportation Average had its best month in 72 years — that’s pretty historic). His argument revolves around the announcement which came out of Europe on October 28, and why it impacted the equity markets. As most realize, it had nothing to do with “good news” from Europe. Pretty much anyone with half a brain looked at the European summit and said, “Greek bond holders taking a 50% haircut isn’t good news… why is the market rallying like crazy?”What it boils down to is this: when the banks agreed to a voluntary 50% write off on Greek debt, that agreement caused credit default swap clauses not to be triggered. If the write off is “voluntary,” it is not considered a default, so no CDS. Once it became apparent there would be no CDS event, the parties involved no longer needed to hedge their risk on CDS counterparties through short positions.

Imagine you were a big player who sold a CDS on Goldman. You would then short Goldman stock to help hedge your risk exposure, and protect yourself in case you actually had to pay out on that CDS. When the CDS event was voided due to the voluntary write-off agreement, that risk exposure evaporated. And those shorts got covered.

In the interest of brevity, suffice it to say that this “voluntary” agreement out of Europe caused many short position hedges on the SPX and financials to be covered, which then squeezed the short hedge funds and caused them to cover, which then got picked up by the algorithm bots who added more fuel to the fire, followed by momentum traders, followed by John Q. Bear who had his stops hit or his margin squeezed, etc..

Before you know it, the SPX gaps right through the neckline of the old head and shoulders pattern like it isn’t even there. I am simplifying things a great deal here, but I think my readers are smart enough to get the basic picture.

The bottom line is: the government changed the rules in the middle of the game. Imagine if you were a football player who returned a kickoff 100 yards all the way to the endzone, then spiked the ball and started celebrating… at which point the officials came running in and said, “Sorry, no touchdown. In fact, it’s a fumble. We just moved the endzone out to the parking lot. By the way, grab us some hot dogs on your way back.” That’s basically what happened to the credit default swap players. Changing those rules had a major impact on the “private” equity markets, and caused the melt-up.

This is another thing that always interests me about Elliott Wave: had the rules of the game not been changed, it seems more likely that the counts I posted on Wednesday might have panned out better. The market sometimes forms patterns which “keep their options open.” The patterns can, in essense, morph into something different if influenced enough by an outside force. This is another reason no analyst can be right 100% of the time — you make a call based on your best analysis at the moment, but outside events can transform a pattern from something that appears to be a low probability potential, into a reality.

Nothing is guaranteed — the best we can hope to work with are probabilities. I get my money in when I’ve got the odds on my side, and I get it out when I don’t.

The situation in Europe is still far from bullish. There is simply too much debt in Greece, Italy, Ireland, Spain, France, and Portugal for the Eurozone to recover from unscathed. Meanwhile, the United States is running into debt problems of its own. The U.S treasury market is deeply dependent on foreign central banks (FCBs) for support… and lately the bids on U.S. debt are drying up. My associate Lee Adler at the Wall Street Examiner compiles one of the most comprehensive reports available on the Fed and US Treasuries. The data and analysis he provides is incredibly comprehensive and useful. Put simply, it’s a champagne report for beer money.

The following is reprinted, with Lee’s permission, from his wallstreetexaminer.com/ report:

FCBs are in a short term cyclical upturn in their buying pattern, but this turn comes from an unprecedented level of weakness and the numbers coming off the low are pathetic, and still deeply negative. If this is the up phase, I can’t wait to see the next down phase. It will be ugly. But we probably will not have to deal with that for at least another 6 or 8 weeks if typical timing holds for this buying cycle. On the other hand, unless FCBs step up to the plate much more than they have in the past couple weeks, either the Treasury market will collapse, or the stock market rally will fizzle, or both. We’re not there yet, but if these trends continue, make no mistake, the balance will tip.

The chart below is also from the wallstreetexaminer.com/ , and is again reprinted with his permission. It shows the FCB holdings and activity going back to 2007. You can see the 4-week moving average has broken down to unprecedented levels: 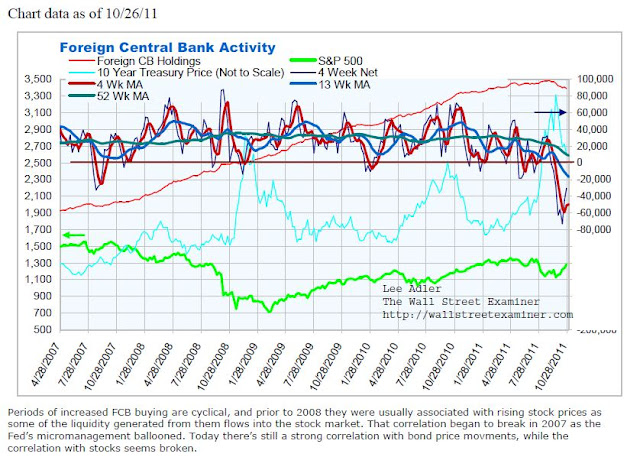 It appears that the governments are running out of money to lend to each other. We all know that real wealth cannot be generated by a printing press. The nature of money is the same as every other commodity: the more of it there is, the less it’s worth. So the governments can print until their hearts’ content, but ultimately they’re not actually creating anything, other than higher prices out in the real world. They’re really only shuffling pretend money around in a type of gigantic shell game… or Ponzi scheme, whichever image you prefer. The real world knows that true wealth is only created through production.

And production is something the world currently lacks. Right now, the entire world economy is riding on the backs of an estimated 87 workers who make Widgets at an industrial plant just outside Beijing. (I realize I’m overstating the situation here — but not by much.)

It seems to me that this grand experiment in economic design is getting very close to running its course. I think it will be terrifying when it all starts collapsing in earnest, and the public realizes that not only does the emperor have no clothes, but even his pretend clothes were insolvent. (Okay, maybe I’m trying to stretch that one too much… you get the picture.) I will end this thought with a quote from F.A. Hayek:

“The curious task of economics is to demonstrate to men how little they really know about what they imagine they can design.”

Beyond that bit of insight, the market finally did me a favor on Friday and allowed me to relax a bit over the weekend (well, at least as far at the charts go… still had this article to write!). There’s been no material change in the counts since Friday’s update, so I am still anticipating two likely resolutions to this historic rally:

1) Thursday was a blow-off top and the rally is over.

Due to Friday’s (October 28) sideways action, there isn’t much to update in the charts (for once). Friday could have been the b-wave of an a-b-c correction, in which case the market should find support around SPX 1265-1270 before rallying higher… or it could have been the start of something more ominous.

(Also check out the U.S. Dollar Update to see how the dollar and stock charts may be lining up together.) 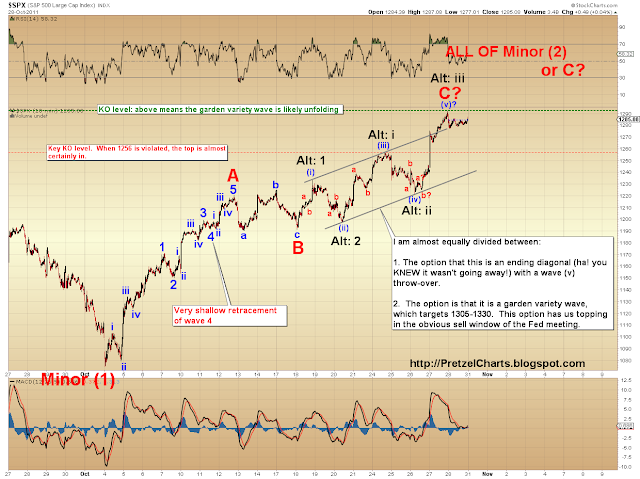 The NDX also did nothing noteworthy on Friday, and I am still considering the ending diagonal as a possible final resolution of the NDX rally, though it is certainly not the only possible conclusion. Two alternate conclusions for the NDX revolve around the black “Alt: 4” label on the NDX chart. If that alternate label indeed marks the end of the 4th wave, the two most likely outcomes are either: 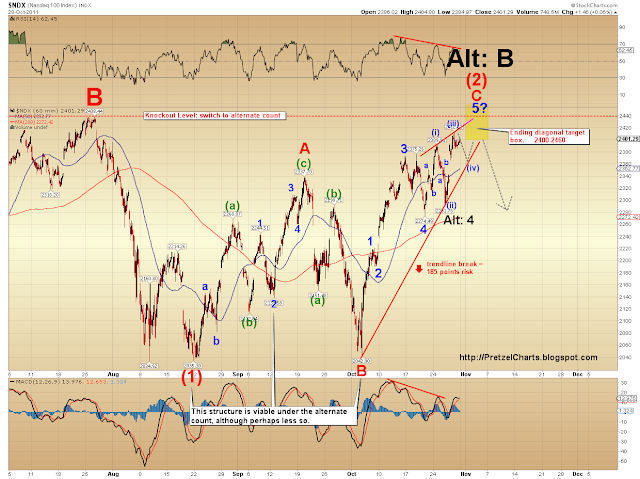 As I talked about on Friday, I am still equally split between the idea that the rally ended on Thursday, and the idea that there’s one more marginal new high coming. The bulls are now openly gloating, and many of the bears I talk to have either capitulated, or are nearly there… so the sentiment is right where it usually is at the end of a bear market rally. It sure looks to me like the top is a lot closer than the bottom now.

This article is re-posted from http://pretzelcharts.blogspot.com/

Original title: “SPX and NDX Update: A Disturbing Look at Fundamentals, and the Rally Explained.”