Retail: Pain in the Middle

by admin
in Uncategorized
0
0
SHARES
7
VIEWS
Share on FacebookShare on Twitter
by guest author Dee Gill, an editor for the YCharts Pro Investor Service

September retail sales figures released Friday seem to indicate that consumers are too afraid to spend $150 on a new coat but happy to lay down $35,000 for a new car. Rather than illustrating a trend in nonsensical budgeting, these figures may be showing us a more fundamental shift in the economy:  a growing divide between the haves and the have-nots.
The confounding data come from Commerce Department numbers showing modest (0.6%) growth last month unless auto sales are included. With autos, September’s retail sales growth was the fastest in seven months.

US Retail Sales (Excluding Motor Vehicle and Part Dealers) Chart by YChartsRetailers who have stores filled with less-than-car-priced items have been subtly illustrating this diversion in small versus large spending with earnings reports since this secondary recession caught on. Fewer shoppers are picking up $35 jeans at Aeropostale (ARO) and The Gap (GPS). But the $12 versions at Wal-Mart (WMT) are selling fine, and the $300 variety at Nordstrom (JWN) is very much in demand.

Consider the fates of the more middle-market mall stores. Aeropostale, which caters to teenagers who don’t trust fashion to Wal-Mart and have a little more cash than that to spend, reported same store sales down 14% last quarter vs. a year earlier. American Eagle’s (AEO) sales were flat. The Gap, with its slightly more expensive version of fashion, announced Thursday that it will close 21% of its stores. Investors have treated the shares of these stores accordingly. 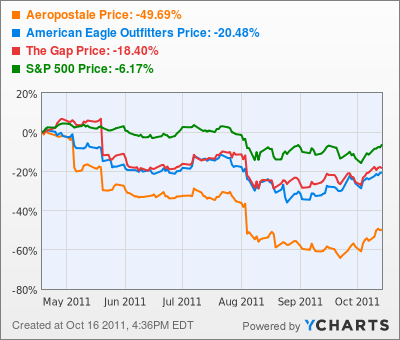 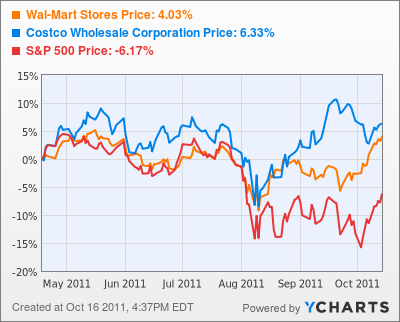 But the real sales gains – and an important contributor to U.S. retail sales gains lately – comes from the luxury end of the market. Jeweler Tiffany (TIF) reported same store sales up 24% last quarter. Limited Brands (LTD), whose stores include Henri Bendel and its $500 handbags, just reported sales up 11% in the five weeks to Oct. 1 alone. Even Nordstrom, a department store that sells more than just expensive designer brands, reported a 10.7% rise in same store sales for that period. Again, this is no secret on Wall Street. 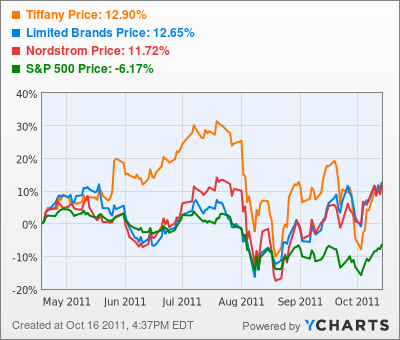 Yes, Ford (F) and General Motors (GM) reported strong quarterly sales gains, 13.4% and 18.7% respectively. With food and gas prices up and unemployment persisting, it’s an impressive feat. There are few explanations other than the possibility that people have gone so long without buying new cars, there’s pent-up demand. But does it mean that the economy generally is in better shape than other news implies?

Not for everyone. With stock market losses since January a modest 4.5%, despite some hair-raising days, much of the upper middle class and those who have even more money in investments still have money to spend. But someone’s worried enough to move their shopping to Wal-Mart.

India: Reining in the Inflationary Dragon

India: Reining in the Inflationary Dragon