13 Banks That Rule The World

With Janet Yellen virtually proclaiming that she is central banker to the world it’s time to roll out this post again, last retitled and reposted on January 28, 2015.

A central tenet of my view of the markets is that there’s just one worldwide pool of liquidity, and it is ruled by the same Killer Whales operating out of a few world financial capitals. We call those whales (or sharks if you prefer) Primary Dealers. They feed in the ocean of cash pumped in by the world’s major central banks, essentially the Fed, the ECB (Europe), and the BoJ (Japan). The PBoC (China) is also playing a growing role as it integrates its financial markets with the rest of the world’s, but its system does not use Primary Dealers, per se, and its linkages to the rest of the world are more obscure. The BoE (UK) is a minnow in the sea of big fish. It swims along with them.The same banks feed at the BoE trough.

Here are the Big 3’s Big Fish. 13 big banks are the kings of the financial world. 28 others are also players who drink from one or two central bank fountains and play in the worldwide sea of liquidity. 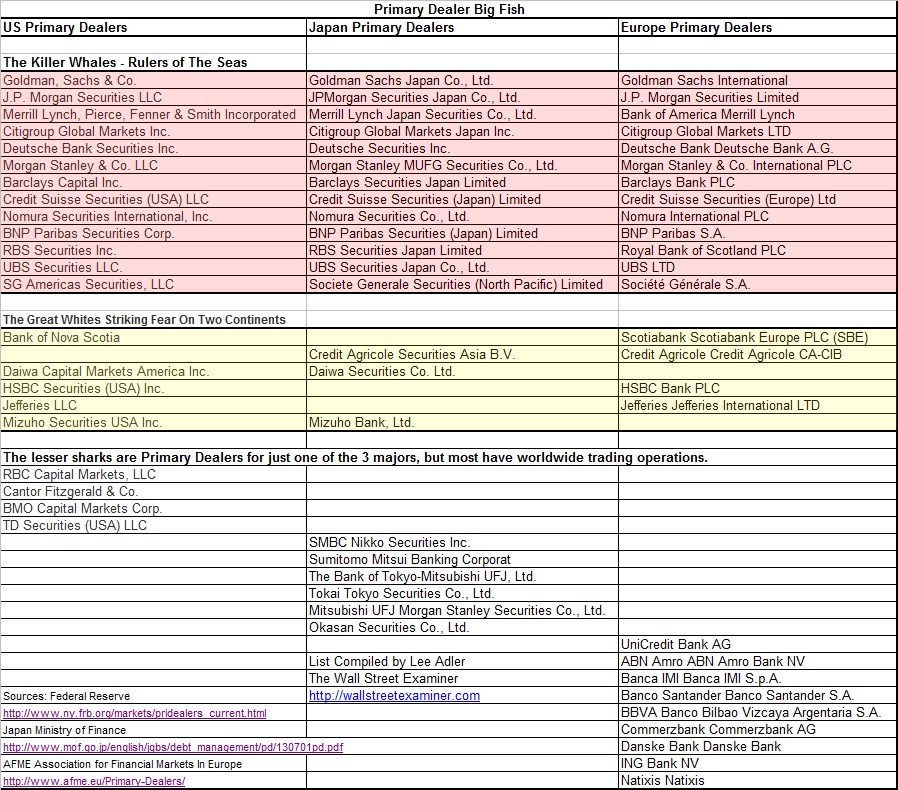 Central banks only pretend to make policy. Once they print the money and purchase securities from the Primary Dealers (or lend the cash to them), the dealers decide what to do with it. The dealers are the real policy makers. The central banks have no control over where the cash goes once they intone “Abracadabra” (Aramaic for “I will create as has been spoken”) and magic wand wave the cash into existence.

That is why this happens.

The IMF study asked the nations about the advantages and disadvantages of Primary Dealer systems. On the disadvantages question, 11 of the 20 developed nations in the survey either had no comment or said there were no disadvantages. 7 of the nations beat around the bush with niggling issues. Two, the UK and Canada cited the need to supervise and regulate. The UK cited “cartels” as an issue. Singapore cited an “unlevel playing field.”

Only one, Belgium, the headquarters of the ECB, nailed it. Belgium said:

A concentration of PDs is developing in the banking community over the world, with the same PDs evident globally. The result is a certain degree of oligopoly power.

There you have it, right from the horse’s mouth. This fact has been the basis for my research in tracking the actions of the major central banks every week for the past dozen years.

I talked about this in June 2013 in a documentary about the Fed by CNBC Africa’s Lindsay Williams. Here are the excerpts from that documentary where I discuss these facts.