Greece missed a payment to the The International Monetary Fund (IMF) of about 1.5 billion euros, or $1.7 billion, on Tuesday which officially put the country in the ranks of Sudan, Somalia and Zimbabwe.

Although the IMF is not considered as a commercial lender, and the Fund does not use the term ‘default’, the inescapable conclusion is that Greece has indeed defaulted. This occurred in conjunction with Greece’s European creditors rejection of a request by Greece for a 3rd bailout at eleventh-hour.

The Biggest Deadbeat of IMF

As reported earlier today, the missed payment by Greece dwarfs every other deadbeat nations in the Fund’s history, and Greece will go down in history as the first developed country to miss an IMF payment.

Now that Greece has got a taste of financial chaos and social unrest, the latest Act from this Greek Drama is that Prime Minister Alexis Tsipras has signaled that the government is willing to accept many of the terms of a bailout package that it had earlier rejected (It is like why bother? Greece could have get this done months ago.)

But it seems too little too late as German Chancellor Merkel, burnt by months of brinkmanship, said

“There can be no negotiations for a new credit program before the referendum.” Merkel’s finance minister, Wolfgang Schaeuble, also told reporters that the country has provided “no basis for talking about any serious measures” to break the deadlock.

Path of The Greek Referendum

So for all likelihood, the referendum is still to take place on Sunday, July 5. Below is a flowchart by Bloomberg showing possible outcomes of the Greek Referendum. 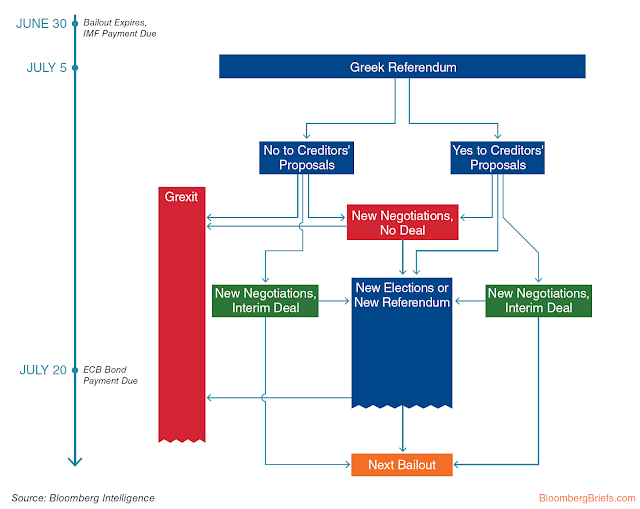 If Greece votes “Yes,” it might be able to get a third bailout package in a few weeks….till the next missed debt payment, and Tsipras and his leftist Syriza party most likely would be ousted.

If voters say “No,” Grexit could be in the cards, and also means Greek banks and the government would run out of cash very soon compounding the current chaos of capital controls and pension rationing.

Nevertheless, a “No” vote does not necessarily rule out the possibility of another round of new negotiations and some kind of deal (although I personally doubt the German would go for that).

Unlikely to Survive A Grexit

In my opinion, Greece inevitably will need to go on some kind of austerity program to steer the country back to economic and financial health. Judging from the anti-austerity movement in Greece, and everything else transpired in the past few years, it is highly unlikely that after exiting (and without the support of) the euro and EU bloc, Greece would be capable of a proper reform to land on its feet again.


Many Greeks Still in Fantasy Land


Tsipras is calling for ‘No’ Vote in July 5 Referendum that could lead to a better deal , and it seems he still has the support of many Greek citizens wanting to call the bluff of EU, IMF, and Merkel, etc. Well, when you play with fire, be ready to accept the consequence of a totally burnt-down Greek House, while the rest of the world would simply go on.

The Success of the European Tiger

The Success of the European Tiger