Interest Rates Do Not Drive the Economy or Even Stocks Up or Down: So What Does?

We KNOW that Paul Volcker stopped inflation in its tracks in 1978-1981 by jerking the Fed Funds Rate through the roof, from 12% to 21% in 1980. This created a couple recessions; and it killed inflation on the spot (well, sort of).

This article will show the reader that there is something else involved in economic cycles, something beyond interest rates. Interest rates are NOT the mechanism that triggers growth and/or recession; they can be used this way only if they follow the hidden cycles that underlie nature’s primary energy circulations. Clearly, the FED believes that low rates cause growth — clearly they do not, as we have witness since 2001. Clearly the FED is ignorant of the true energy system in nature that causes expansions and contractions, inflations and deflations, in a very regular pattern, which can be and should be synced with interest rate policy.

I intend to work with this picture as a sketch only. I do not want this paper to become a number-crunching analysis of interest rate increases juxtaposed against interest rate retractions. Nothing bores me more than this type of writing.

My point is to examine the direction of interest rates in a very general sense juxtaposed with economic strength and weakness AND with stock market gains and losses. 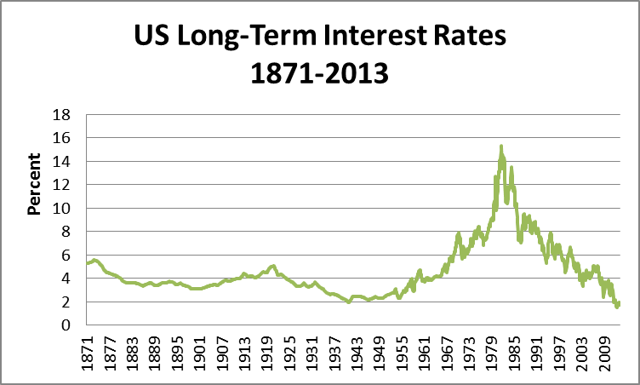 How do I know about these cycles, if they are hidden? Fair question. In truth, I came to recognize the 36-year cycle by analyzing events in my own life and eventually comparing them to American social and economic history. Please understand, this ‘breath of God’ cycle is not a cycle governing economic history only. Economics is a secondary effect of a phenomenon working in all of nature. The cycle in question (as are probably all cycles) is a matter of energy dynamics. Creative energy expands for 18 years, driving the growth and evolution of all material systems, man’s systems, but also other natural systems; then it vanishes, becoming its opposite; in the material system, creative energy transforms into entropy, destructive, a kind of negative electrical energy.

There are many smaller cycles of Creation and Destruction and Re-Creation; and I assume there are also larger cycles of the same. I became aware of the 36-year cycle in 2009, as I began my second cycle through this archetypal spiral. My second death-cycle. From 1965-1983, I experienced a very strange, painful, magnificent journey into the Underworld, which I now call a Night-Cycle. I have come to understand this as a kind of dream, sleep-cycle. Everything had stopped. I am reminded of the Biblical idea: Six Days of Creation; and then Rest. This death-cycle, sleep-cycle was the Sabbath idea; the gods, the Elohim, created the world in Six Days; and then they rested. So does the economy rest.

The world we created from 1947 through 1965, we destroyed from 1965 through 1983. The Creative Energy system that drove the world through growth from 1947-1965 turned inside out and upside down, became entropic from the material world perspective. In fact, the world we humans created from 1911-1929 we humans destroyed from 1929-1947. This had nothing to do with interest rates; but it could have, and perhaps should have.

NOTHING the FED can or will do will have any real positive effect on positive economic expansion until 2019. That is a law of nature.

We have a little number-crunching here. The table below shows that the sketched interest rate cycles DO NOT correspond with Dow Jones price gains. Interest rates are all over the board. But Dow Jones price gains (and cycles of economic growth) have everything to do with the Day-Cycles and Night-Cycles I have outlined above. Remember, I’m doing a broad sketch of the interest rate picture. If low rates force economic expansion and stock price appreciation then the UP periods should show stock losses and the DOWN periods should account for the bulk of stock gains. They do not.

From 1947 to 1983, interest rates rose steadily — and stock prices gained almost 600% during that time. There is really NO CORRELATION show here between low rates and stock gains. Also, the interest rate picture has nothing to do with the economic cycles: from 1947 to 1965, the economy expanded; then entropy set in, and the economy sank into dis-organization, lack of direction. It lost its power of expansion (creative energy).

For real correlation, look at this table, which shows Creative Day-Cycles leading economic and investment growth, and subsequent Entropic Rest Seasons (Night-Cycles) as corresponding to the loss of economic vitality and direction and sideways markets.

I have been a vocal critic of FED policy since 2001. My view is that growth is not perpetual; that our system implies growth is always followed by non-growth, entropy, Night-Cycle Deflation. Attempts to cheat Nature (to break Natural Laws) always lead to punishment of one sort or another. Modesty necessitates a recognition of a power higher than man.

The FED has spent trillions of America’s future money to attempt to cover-up the truth about the real nature of the economy. And what did all those trillions buy, well so far only 3.84% growth per year on the Dow Jones Average. I also attach a picture of the Dow’s performance from 2001, the beginning of the Night-Cycle, to 2008, the year of FED vitality enhancements (QE and then ZIRP, with NIRP coming?) losses of about 1.3% per year (before financial Viagra was added).

If one looks at the other Day-Cycles and Night-Cycles in question, one sees a very clear pattern in (at least) Dow behaviors. Massive gains during Day-Cycle expansions; and then modest losses (sideways movement) over each 18-year Sabbath. My book, TURN OUT THE LIGHTS, shows a similar correlation between these cycles of creation and destruction in terms of the US economy also.

The Day-Cycles above correspond to the historic Business Cycles, ARE the historic Business Cycles, each of which is followed by an 18-year hiatus, or rest period, sleep, dream, death ‘horizontalization’ of the economy. If we think of the economy as a plant, 1947 is when the seed (germinating in the dark) is called to life by a New Sun for a new cycle of World Creation. 1965 is the High-Noon of plant growth, when the seed has fully developed and given fruit — which is the point in which Creative Energy begins to become entropic, growth turns into decay. From 1965 through 1983, the fruit falls back to Earth; the seed extracts itself from the decaying (dead) body of the fruit, and buries itself back in the earth, rests and waits for the Spring Sun to call it back to life.

Life is the ‘verticalization’ of energy; rest is the horizontalization of energy.

Most people will dismiss this idea of Nature’s super-regularity. However, Nature is super-regular. Summer begins every years on July 21; Winter begins every year December 21. Specific eclipses return to earth every 18 years stitching quilted light patterns on the earth moving either from north to south or from south to north, pole to pole, for 1280 years. Total eclipses begin in the middle of this pattern, and last for 252 years.

As an example of a single saros series, this table gives the dates of some of the 72 lunar eclipses for saros series 131. This eclipse series began in AD 1427 with a partial eclipse at the southern edge of the Earth’s shadow when the Moon was close to its descending node. In each successive saros, the Moon’s orbital path is shifted northward with respect to the Earth’s shadow, with the first total eclipse occurring in 1950. For the following 252 years, total eclipses occur, with the central eclipse in 2078. The first partial eclipse after this will occur in the year 2220, and the final partial eclipse of the series will occur in 2707. The total lifetime of lunar saros series 131 is 1280 years.

Our scientific spirit (reason?) teaches us that mysteries in life are “childish” illusions to be abandoned, to be debunked, in favor of sober systematic testing and understanding. Truth is ever repeatable in a laboratory setting. Sadly, this reduces our globe and our selves and our lives to the sterile and the dead, values the measuring of the husk instead of the experiencing of the essences of life. It helps us to produce great machinery; but it tends to also make machinery out of our human nature. It also begins to exclude many from the dominant world view: prisons, insane asylums, alcohol and drug-addiction centers grow all over the globe. Crime increases; religious and political antagonisms to the dominant view gain support in the mass. The alienated fringe becomes the alienated mass. The ruling elite becomes smaller, more frightened, and more rigid, surrounded with military protectors.

Remember, the concrete mind that measures the world, and builds machinery, is lower and heavier than the intuition that visions the world directly through the mind, as if the mind were a pair of eyes instead of a number-analyzing device.

Clearly the history of lunar eclipses is filled with a mysterious geometry and exact regularity; and the more we learn from and about Nature, even through science, the more mysterious Nature appears.

Science limits our spiritual progress even as it enables our technological progress. Science must always invent machines that can measure reality; reason is ‘late’ discovering electro-magnetism, anti-matter, dark-matter, because what a mystic (and a mystic-scientist) can see with his mind, the practical science can only measure once he creates a machine capable of such measurements. James Joyce knew about ‘quarks’ in the 1930s; science discovered ‘quarks’ in 1951.

This off-topic discussion illustrates my belief that science will recognize the 36-year cycle in the near future; reason is so bent on debunking the imagination that its assumption seems to be that what we know today is final, the true picture of reality; in truth, our understanding of reality, Nature, keeps growing, and has no bounds of height of depth.

What if these 36-year cycles are factual? Would it not make sense to play our economies around them, to plan for and prepare for regular 18 year expansions followed by 18 years Sabbath cycles of rest? Would it not make sense to coordinate interest rate policy with these regular expansions and contractions? This would make our economic policy rational in the highest sense.

Anyone interested in these ideas can find more of them under my name in the SEEKING ALPHA archives.

EVERY Night-Cycle is about the experiencing of death, failure, down-sizing, despair. Economic systems crash during every Night-Cycle. There is death; but there is also life, rebirth, resurrection of order, and a new belief in law, organization, creation of the world.

Every Night-Cycle the society’s mystics (solitaries) ascend the Mountain of Revelation (Sinai to the Jews) to bring new laws of nature, revelations, back from God down to the Earth. These new revelations of Nature’s Laws are designed to help and even to save humanity. Ignoring or debunking new visions must not be the primary energy of Reason. It must be remembered that God communicates with humanity through the Heart, the Intuition and the Imagination, not through Reason and the Concrete Mind.

Of course, the Debunking Mind has already gained power and self-respect by debunking the Idea of God. So, we are in the position of being led by those who can only see one-half of the world but who believe they are seeing everything — until some new machine is developed to show them they were missing something essential all along.

“Discover what is essential; and eliminate everything else.”