Aristocracy Is Dead … So Why Isn’t Orthodox MacroEconomics Gone Too?

Having studied biology for years before ever paying attention to economics, I immediately wondered where the heck orthodox economists get their many, strange ideas.

Nothing made sense until something plausible dawned on me:

Orthodox MacroEconomics is an extension of Aristocratic “Court Politics”

and is at heart a management theory for how an upper class can best rule “the masses.”
To me, that explains nearly everything about orthodox macroeconomics and its inane list of things that human behavior “should” include. It’s an unfortunate set of vague myths blindly promulgated by groups as diverse as aristocrats, property owners, cattle herders, and capitalists. Meanwhile, we always knew that human behavior can evolve as fast as new contexts arrive (at least so far). There’s a fundamental dichotomy here. Peasant reality is that we have zero predictive power. We only know that recombination on all levels works, with few bounds.
What are the implications? A rare, honest person states one aspect of the obvious.

So why is orthodox macroeconomics still kicking us while it holds us down? We’re only down because we’re LETTING a dead-man-walking hold us down.

Well, that, and also partly because too many dimwit escaped serfs only want to be Aristocrats themselves, if given the chance. Doh!

… (but Rulers Don’t Care To Notice)

Ya think? So there’s yet another another flaw in orthodox economics: the presumption that emerging aggregate outcomes should be logical? Really? Why doesn’t this invalidate the entire field? There’s a seemingly obvious answer.

“Thaler began to keep a list of things that people did that made a mockery of economic models of rational choice.”

Well, that’s yet another indicator that orthodox macro-economics grew out of aristocratic politics, not tribal common sense based on trial-and-error progress.

“Logic” is just a body of perceived patterns, which we use when trying to extrapolate from past experiences to future predictions.

Biology, chemistry, physics, etc, etc have amply proven that the past order of any system does NOT predict all of it’s future options.

Aggregate degrees of freedom are a function first of aggregate inter-dependencies – which grow factorially with system growth – PLUS any changes in external context, which may or may not change at seemingly fixed or unpredictable rates, but always change nevertheless.

Orthodox macro-economics has become an increasingly impossible yoke to live with. This is one parasitic baby we’d do well to throw out with the accumulating bathwater.
Call it “Marie’s Dilemma”: 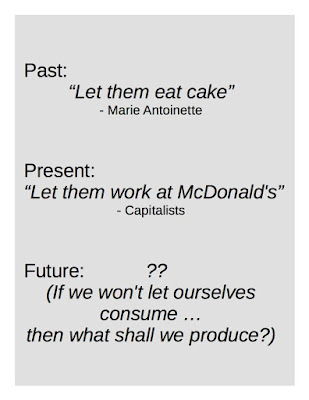 The Digital Divide Is Still a Thing

The Digital Divide Is Still a Thing