The Real Reason the Fed Has To Raise Rates in June

There is a lot of debate about what the Fed is going to say regarding rates next Wednesday at the FOMC Meeting. Will they change the language, will they signal rate hikes, etc. but pundits haven’t really addressed the main reason the Fed has to raise rates in June. 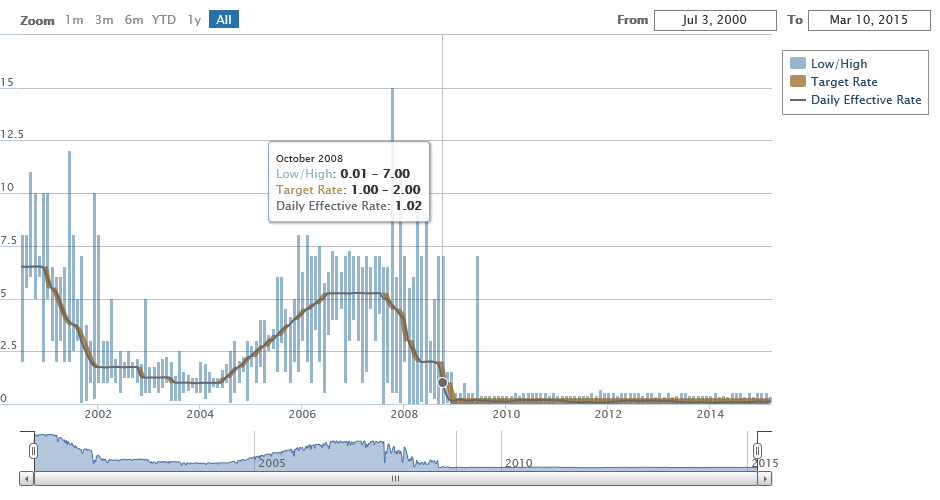 The real reason is to consider the alternative, that they wait and raise rates at the next major quarterly Fed Meeting in September. If we assume the same continuous trends regarding employment, GDP, retail spending etc. that we have been producing for the last 12 months, then things are going to get real uncomfortable for the Fed and markets come the September FOMC Meeting. For example, the unemployment rate may be close to 5.2% or lower in September, wage inflation and the core inflation readings have been ticking higher. Both measures will only escalate if the current economic trends of small business and consumer optimism continue their current pace, and the gasoline stimulus starts pushing through for consumers from their bank accounts out into the broader discretionary spending landscape.

This could cause the Fed and the markets to realize in retrospect that they are well behind the curve, and the dreaded 50 basis point rate hike comes in September, followed by another 50 basis point rate hike the following month. The turmoil in markets would be considerable to say the least and cause a severe asset reallocation in markets all at once. Those of you who wish for a delayed rate hike, only like that alternative if the Fed never raises rates, which is highly unlikely given the performance of the economy and its current pace of trending growth.

Therefore if rates are going up even the most dovish market participants want the Fed to raise in June by 25 basis points, and slowly ease into the rate hiking cycle. Sure there will be some market turmoil, but market turmoil is inevitable given ZIRP for 7 years, there is no getting around this, and the Fed knows this fact. What these same dovish participants don’t want is a 50 basis point rate hike in September because the Fed waited way too long when it was obvious they should start raising rates in June. The Fed doesn’t want to cause this kind of market volatility. The tradeoff is a no-brainer, take a little pain now for markets, or a whole bunch of pain by waiting until September.

The September option risks the possibility that everyone knows it is too late to raise rates by slowly getting into the rate hiking cycle with a measly 25 basis point rate hike. That isn’t going to cut it in September with a 5% unemployment reading and a 25 basis point Fed Funds Rate. History and economic theory has proven this is disastrous to say the least.

You Might Not Want What You Think You Want Financial Markets

Consequently the doves who think they want to delay raising rates by a mere 25 basis points, should consider what they are really asking for, a Rate Hiking Tradeoff. The Tradeoff is as follows:

In essence it becomes abundantly clear they should have raised rates in June and now realize they need to play catch up in regards to the rate hiking schedule.

Everything Has a Cost

This is the Tradeoff that financial markets and the Fed need to consider because nothing is free in this world, everything has a cost. The Fed’s main job is price and market stability, and the most logical course of action is to ease into the rate hiking cycle a little bit at a time with a 25 basis point rate hike in June that is well telegraphed to financial markets. If rate hikes are a given, and most market participants deep down will admit to this when push comes to shove, then if they really think about the alternatives of how the rate cycle plays out, they should actually encourage the Fed to raise rates 25 basis points in June in a well telegraphed manner.

Which Rate Hiking Option Creates the Most Market Turmoil and Instability?

What they actually don’t want is the other option which will cause them a lot of pain that they will regret like a binge drinking alcoholic thrown into a rehab clinic cold turkey straight out of the neighborhood bar. Financial markets should actually be begging the Fed for a June 25 basis point rate hike, the alternative is going to cost them a lot more money and a shock to their massive, poorly positioned portfolio of assets in this ZIRP Fantasy Land. Hopefully there are some rational members of the Federal Reserve, two such members have already voiced some rational thought regarding hiking rates in June, and we will see if more prudence prevails with the rest of the Fed members meeting next week. The alternative to not raising rates in June is just too dangerous for the Fed and financial markets.