Once upon a time, in a village in the country, there was a farm with a big poultry-house. During the day the chickens walked outside and in the evening they went inside on their roosts. Although most often the same cocks and hens claimed the best places, things went generally peacefully and friendly.

However, sometimes there were reasons to complain, for instance, when the house had not been cleaned properly, or when the wind hawed through the chinks in the walls and the rain dripped through the roof. One of the cocks always knew well how to word the dissatisfaction. Several times, he had met with cocks of other farms, where they had the same problems. Together they had set up a party. He knew the whole party program by heart and cackled “If you vote for me, I will represent you in the chicken-parliament. I know what you want!” And so it happened on election day the cock was elected chicken-representative.

He was proud as a peacock, although, of course, a cock will not easily admit that. Perkily he walked to the big poultry-house in the center of the village. Inside, behind the windows, it was pleasant staying. In the big entrance hall he cackled joyfully with party members and other cocks and hens who had been elected. For all big problems each representative knew a solution. But still before they could agree upon when to discuss these matters officially, a few cocks shouted “Silence! Silence!” And after the cackling had lowered, they continued: “We are the leaders of the parties! We decide! We will deliberate together and then you will do as we say!” In the hall a little bustle resounded. Our cock addressed himself to an older one next to him, who seemed to have more experience. “Do they mean that THEY take the decisions and WE must vote the way they say? ” The old cock nodded assent. “Yes, that is the way it goes here. And if you want to vote without burden, you better vote as your party leader orders.” And so it happened our cock could still stay home during a few weeks, before three of the leaders announced triumphantly, they had succeeded. With their three parties together they had the majority of the representatives in the chicken-parliament and this way they could vote upon all laws they wanted, without having to bother about the objections of the other representatvives. The three of them had already written down the decisions they had agreed upon together, in a cackle-accord.

Our cock was asked which subject interested him most. “Good roofs for the poultry-houses”, he answered. And promptly he was incorporated in a commission “Roof covering“, that met once a week on this subject. That was not a boring task, because this way our cock learned about all the types of roof covering you could imagine, about the advantages and disadvantages of each type, its durableness and, of course, its cost. And, at noon, he could go to the parliaments own restaurant, where they served the finest salads and cereals and where the cock and hens cackled pompously with each other. And every now and then, when the party leaders had prepared a new proposition of law, the cocks and hens had to come to the main hall and vote. Fortunately they were not obliged to read all these difficult texts. Their party leader would tell them if they had to vote in favor or against it.

Time went by and in the poultry-houses in the village there were little changes. Those who had the best places still had them, with maybe a bit more hay and food than before. And when it was time for new elections, our cock would cackle with everybody again. They could trust him. He knew what everybody wanted and he had experience in parliament. And thus he was elected regularly as chicken-representative again.

This went on for many years. Chicken went and younger ones came, as it usually goes at a farm. When our cock was too old, the chicken elected a brilliant young cock, who undoubtedly would do better. But after several elections, he too, turned out to be unable to force improvements. Meanwhile the poultry-house had become ram-shackled. When the wind blew, the poles shook and the wire-netting flapped. When it rained, buckets of water came through the roof and the floor became a puddle. But what could they do? Things never changed. They decided they would go to the parliament all together. Determined, they went in procession to the center of the village, to the high poultry-house with the large windows. At the entrance a few cocks with fiery red crests and brilliant feathers stood guard. It took a while before they had checked all the visitors. Finally everybody could take place on the roosts, reserved for the public, in the back of the parliament hall. When the meeting opened, the chicken wanted to express their grievances, but hardly they had opened their beaks, when the chairman beat with his wooden hammer and told them, that if they did not keep quiet, they would be removed from the hall. Dazed, they kept their beaks shut. Not a chicken dared to say a word. Disappointed they slinked off. They had been so hopeful that finally they would be heard.

The next day they still cackled about the sad way things had gone. They talked to their representative about it, but he explained he was not to blame. He just did as he was told to do. The chickens shook their heads. This way things would never improve.

“Strange, we have a chicken-parliament and the representatives we chose don’t have any say there. Then they are useless, aren’t they? We all know what we need. Good rules for housing and healthy food. Why can’t we decide that ourselves? We are the people, aren’t we?” From the corner where the learned cocks stayed, resistance sounded.

“No chickens, when everybody may participate in the decisiosns,, it will be chaos. Maybe parliament doesn’t always do what you want, but it cannot please everybody.”

It was all very well for him to say so. He lived comfortably. He was a descendant of a prominent cock-family, who, since generations, had their own niche to sleep in, in a quite corner of the house. And, as a professor in cackology, he belonged to the small circle of aristocrats, who always claimed the front row at the manger. The chickens did not react to his objection. They knew he would never grant they were right. Nervously they went around picking in the ground until one of them suddenly shouted out:

“I know! I know! We will just do it! We will prove we can take decisions ourselves!” “You stupid chicken”, said one of the cocks immediately, “you forget that in parliament they also decide about the money. We can decide things, but we don’t have the money to execute them.”

The chicken didn’t suffer himself to be put out:

“That is true, but when we decide the rules we want, the party leaders cannot ignore them. Otherwise we don’t vote for them anymore.” “I admit, you have a point, but how do you want to let everybody give his opinion? That will be chaos, don’t you think so?”

One of the hens joined the conversation. “If we agree that we will not repeat things that others have already said, it won’t be chaos.” “Yes, yes” said the cock, “try to do that with all these chickens! You’ll never succeed!” “Oh no?” and loudly she shouted at the chicken “what shall we decide together?” Instantly all chicken started cackling excitedly. It was one big noise.

“You see?” said the cock, “That won’t work, but you get me to an idea.” And so it came about, that a few days later a big blackboard was hanging on the wall, where everyone could make propositions and everyone could write next to them what was good or bad about each. And each last day of the month everybody could vote upon it. 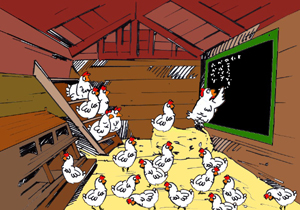 As could be expected, the party leaders watched carefully what was written on the blackboard. All of a sudden they appeared to be able to take the decisions the chicken-people wanted. In parliament laws were passed with quality norms for food and rules for good housing, like the chicken had written on their blackboard. “You see,” the cock mumbled satisfied, “now the people rule after all.”

WhatsApp Closing In On A Billion Users

January Divorce Rush Dates Back to the Middle Ages

January Divorce Rush Dates Back to the Middle Ages