by Franklin (Chuck) Spinney, The Blaster

The United States is careening toward an unnecessary new cold war with Russia. Cold War II may be even more dangerous than the first Cold War, because the constitutional checks and balances and the attention span of the people regulating the US government’s behaviour have broken down. While Ukraine is now at the center of this madness, the neocon-driven march to folly has roots reaching well beyond the Ukraine.

At the same time the United States is rushing to an unnecessary and unwarranted confrontation with Russia, it is engaged in perpetual war on terror that is creating enemies in the Islamic world faster than we can kill them. Moreover, the grand-strategic focus of the war on terror has degenerated into a swamp of contradictions. About the only outcome that is clear in the war on terror is that defense contractors will be the winners. And then, there is the looming pivot to a confrontation with China.

In short, the warmongering politicians of American Empire, like those of the Roman Empire, have succumbed to the delusion of their own invincibility and are driving the United States into the age-old cul-de-sac of military overextension.

Yet at the same time the country is careening to disaster, the American people are tuning out on their government and its actions.

The chart below (produced by the Pew Foundation) illustrates this point. There has been precipitous decline in the percentage of Americans who trust the government “always” or “most of the time.” 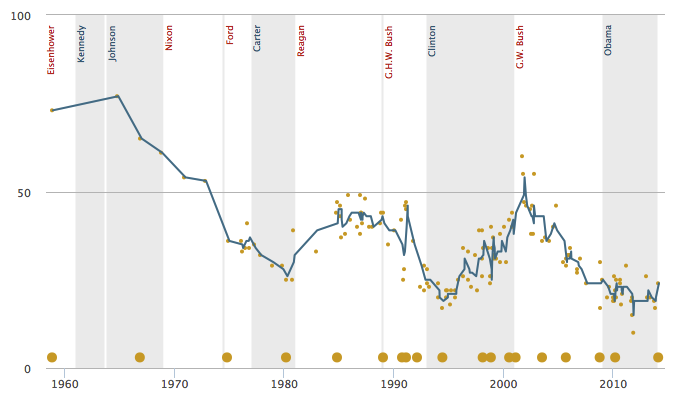 This chart is derived from a larger report released last June by the Pew Foundation. The report describes the breakdown in American politics by analyzing its “fragmented center.” While partisan polarization is a central feature of gridlock politics today, the ideological wings driving this polarization make up a minority of the public. The political landscape includes a huge “fragmented center” that is “large and diverse, unified by frustration with politics and little else.” The majority of people that make up the center simply do not trust their government to act in a constructive way. But – ominously – rather than demanding a correction, they have tuned out, while the delusional ideologues shaping US foreign policy march them and their country to disaster.

The conjugation of warmongering ideologues (reinforced by the factional interests of the Military – Industrial – Congressional Complex) with widespread citizen apathy (reinforced by a sensationalist mass media dumbing them down) has created an extremely dangerous political dynamic.

It establishes the preconditions for the horror feared by James Madison in his 4 August 1822 letter to W. T. Barry, where he began by saying:

“A popular government without popular information, or the means of acquiring it, is but a prologue to a farce or a tragedy, or perhaps both. Knowledge will forever govern ignorance, and a people who mean to be their own governors must arm themselves with the power which knowledge gives.” [emphasis added]

For those readers who doubt this danger, consider please, House Resolution 758, which just passed overwhelming with a majority of 411 to 10 in the House of Representatives.

While H.R. 758 remains virtually unnoticed by the tuned-out mass of American people inhabiting the “fragmented center,” the resolution is a toxic mix of outright lies and sly misrepresentations that is tantamount to a declaration of Cold War on Russia.

Former Congressman Ron Paul, a principled libertarian, dispassionately deconstructs H.R. 758 in the essay attached below. He lays bare the lies, propaganda, and misrepresentations of H.R. 758 in a workmanlike manner.

But Ron Paul is not alone in this regard. Also recommended for your reading pleasure: Paleoconservative Pat Buchanan and arch-lefty Diana Johnstone just penned essays that are in harmony with and expand on Paul’s critique, albeit in less dispassionate ways.

More generally, Professor John Mearsheimer of the University of Chicago just penned a long analytical essay in Foreign Affairs in which he documents the sordid diplomatic history of our march to folly and the unnecessary confrontation with Russia. And last May, Bill Greider described some of the domestic politics, particularly the influence of defense contractors, leading up to the confrontation.