“We can’t run out of money,” economist L. Randall Wray said. The U.S. government spends through keystrokes that credit bank accounts, he continued. The money comes from nowhere. The government doesn’t need to finance itself with taxes. And it doesn’t borrow its own currency. It can afford all that is for sale in dollars.

Despite laying out an incontrovertible set of facts, Wray’s audience often is aghast. He says he gets four reactions when he tells people about how the government spends:

Wray is one of the architects of Modern Monetary Theory, or MMT. In essence, it is a description of how our monetary system works. The implications are profound. And Wray is very good at explaining it simply. Below are some notes from a talk he gave at the Post Keynesian Conference in Kansas City, which I attended.

To begin, I like how Wray emphasized he’s not really saying anything people at the Federal Reserve Bank don’t already understand. First, there is a great quote from Ben Bernanke when, as Fed chief, he was on 60 Minutes:

Scott Pelley: Is that tax money that the Fed is spending?

Ben Bernanke: It’s not tax money… We simply use the computer to mark up the size of the account.

Bernanke gets it. Wray said:

Second, there is this statement from the St. Louis Fed:

“As the sole manufacturer of dollars, whose debt is denominated in dollars, the U.S. government can never become insolvent, i.e., unable to pay its bills. In this sense, the government is not dependent on credit markets to remain operational.”

And yet it is not uncommon to hear people say the U.S. is bankrupt or that the Fed itself is somehow in trouble. People on the inside know differently. As Wray emphasized:

Money… is simply the way we keep score in a modern economy. Banks are the scorekeepers.

Thus, there is no need to balance the budget, heresy of heresies! As Wray said:

“The necessity of balancing the budget is a myth, a superstition, the equivalent of old-time religion.”

To understand how modern money works, it may be best to start with the banking system. Wray began with a simple model of a bank, a firm and a household. “So a firm approaches a bank and says it would like a loan,” Wray says. “Where does the bank get the money?”

It creates it out of thin air, out of nothing. It keystrokes it into existence. It creates a loan (an asset for the bank) and offsets it with a deposit (a liability for the bank). The firm gets a credit (an asset) and an offsetting debit (the loan). No prior deposits needed. As Wray says: “Loans create deposits. The bank lends its own IOUs. Can they run out?

“Of course not. They can’t run out of their own IOUs.”

This is important. If you don’t get this, banking will forever remain a mystery to you.

To get back to our example: The firm then takes the loan and uses the proceeds to hire people from our household. People then use the funds to buy the product from the firm, and the firm uses the money to repay the loan.

So let’s add another bank and a central bank to make it more realistic. Now the firm and the household use different banks. The banks have to clear with one another. They do this through the central bank by using the IOUs of the central bank – called reserves. “What happens if Bank 1 is short reserves to clear the account?” Wray asked. “The central bank creates reserves so that Bank 1 can clear with Bank 2. 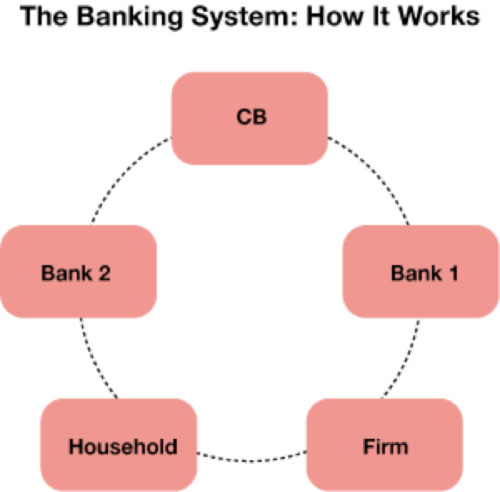 Now, how about the government? The U.S. government spends it currency into existence. This is important, too. The government spends first and then collects taxes. (Logically, this is how it began, or else how would people get the money to pay taxes?) Taxes are what give the dollar value. As Alfred Mitchell-Innes, a diplomat and credit theorist, once put it:

In the old days, this was obvious. A government would, for example, raise a tally. It got a bunch of hazel wood sticks and made tallies and spent them. Or it stamped coins or printed notes. Then it collected taxes in whatever it claimed as money. Today, it is more complicated.

…when someone says the country is bankrupt… you’ll know that simply isn’t true.

The Treasury spends dollars into existence through the central bank. The central bank credits the accounts of banks, and banks credit whoever is getting paid. Taxes reverse the process. Banks then debit accounts, and the central bank debits the banks. The government cannot run out of credits.

Money, then, is simply the way we keep score in a modern economy. Banks are the scorekeepers. They can no more run of credits than the Fenway scorekeeper can run out of runs. Taxes don’t finance the government any more than taking runs off the scoreboard replenishes Fenway’s scorekeeper. And the scorekeeper certainly doesn’t need to borrow runs.

True, there are operational constraints to how much the government can spend. There is the budgeting process, which is a real constraint. There are other technicalities that Wray says are not effective constraints.

For example, technically, the Treasury must have the balance in their central bank account before they write a check, but practically, it makes no difference. This is because the central bank, Treasury and special private banks have always developed procedures to allow the Treasury to get deposits into the central bank before it writes the check.

Another example is that the central bank can’t buy Treasury securities directly from the Fed. But again, in practice, this makes no difference. There are special banks standing ready to buy new issues and then sell them to the central bank.

Wray ended with a slide about what he did not say since people are apt to jump to absurd conclusions:

Though called Modern Monetary Theory, economists have understood all of the above for a long time. Wray shared quotes from 1832 that showed a sound understanding of all these principles. And John Maynard Keynes pointed out that modern money, or the credit-based money we have today, is at least 4,000 years old.

Now you have some understanding of modern money. And so when someone says the country is bankrupt or that it relies on the Chinese to finance it, you’ll know that simply isn’t true. Just these ideas alone put you ahead of most everyone else, including most professional economists.