Abu Usamah Somali, the self-proclaimed “spokesperson of ISIS,” is a Somali-Canadian by the name of Farah Mohamed Shirdon.

Shirdon made his debut foray into the public psyche in a video that went viral last April. In the video, he threatened Canada and America and ripped up his Canadian passport and threw it into a fire.

“We are coming and will destroy you,” Shirdon announced in the video, “this is a message for Canada and for all America.“

Though U.S. or Canadian “intelligence” couldn’t track him down after he fled from Canada to Syria (in fact, they even reported him dead)… 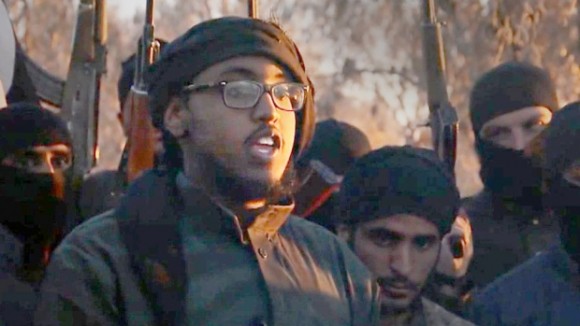 ISIS’ spokesperson is a former movie theater employee from Calgary

Somehow, Vice magazine was able to set up an interview with him. (So much for all that metadata, eh?)

Last week, Shirdon sat down with Shane Smith, the founder of the magazine.

In the interview, Shirdon claims to have joined ISIS on his own initiative, with no recruiter to speak of.

“No one spoke a single word to me,” he told Smith. “All I did, I opened the newspaper, I read the Koran – very easy.” (More on why this tidbit is important in a moment)

Here are some highlights from the interview…

FARAH: “Inshallah, we will make some attacks in New York soon… a lot of brothers there are mobilizing right now.”

VICE: “And what are they mobilizing for?”

FARAH: “Mobilizing for a brilliant attack, my friend.”

FARAH: “The reason is we’re tired. We’re tired of oppression. All those threats that I made, put that all aside. We don’t want… no one likes fighting...

“Whatever regime attacks us, we will attack them. Let us be under attack. We love being under attack. I want jihad. Every single time I see a plane over my head, I become very happy. Maybe is the time that I will go and I will meet my lord.

Why does ISIS want to “paint the White House black“?

Well, that’s the question, isn’t it? It’s also one that nobody in the “official” circles seems to be asking…

Why are Muslims from all over the world flocking to join the cause?

Instead of pondering these things, our leaders jump at the chance to call for further violent intervention.

In fact, as of Friday, the Pentagon had already launched 43 airstrikes in Syria. And there’s no sign of stopping there.

But here’s the thing…

ISIS’ strength is largely a direct result of the Pentagon’s “comprehensive campaign.”

Allow me a moment to explain…

Many of the U.S.-trained rebels in Syria (the Free Syrian Army) are turning around and becoming fighters for ISIS – and bringing their American-made weapons with them.

Over the last year, according to journalist Ben Swann, the Middle East has seen an incredible number of FSA defections to ISIS.

And, according to the U.S. Congress, Obama wants to give $500 million to further equip and train the Free Syrian Army. The Pentagon announced Friday that they’re ready to train up to 15,000 more Syrian rebels.

We’re sure we could hear the excited shuffling of military-industrial contracts in the background.

Saudi Arabia, in their usual can-do attitude, has even agreed to train the rebels in their homeland to fight against ISIS.

Of course, the Saudis have their own agenda.

In reality, they probably don’t care whose side the rebels are on – ISIS’ or FSA’s. As a stiff-necked Sunni nation, the Saudi officials have, in the past, been uber-sympathetic to anti-Shia militants abroad, no matter how radical.

For example, former U.S. Secretary of State Hillary Clinton wrote the following in a December 2009 cable that was later leaked by WikiLeaks: “Saudi Arabia remains a critical financial support base for al-Qa’ida, the Taliban, LeT [Lashkar-e-Taiba in Pakistan] and other terrorist groups.”

The only times Saudi Arabia acted against al-Qa’ida, Clinton wrote, was due to domestic threats, and never abroad.

“By seeking to weaken Maliki [of Iraq] and Assad [of Syria] in the interest of a more moderate Sunni faction,” Middle East correspondent Patrick Cockburn forebodingly wrote last July in The Independent, “Saudi Arabia and its allies are in practice playing into the hands of ISIS which is swiftly gaining full control of the Sunni opposition in Syria and Iraq.”

To boot, while everyone was outraged by ISIS’ beheading videos, The Washington Post reported on Sept. 11 that Saudi Arabia beheaded at least eight people in August.

If we’re speaking in terms of human rights, Saudi Arabia is one of the lowest common denominators. The majority of the mainstream media, of course, has some pretty heavy Saudi-sponsored blinders.

[Let’s not forget also that 15 of the 19 September 11 hijackers were Saudi. A fact that was conveniently dismissed in all war plans. We’re still waiting for those classified 28 redacted pages from the 9/11 Commission Report, by the way.]

“U.S. politicians, including the outspoken Sen. John McCain routinely hector over the state of human rights in Iran – Saudi Arabia’s main geopolitical rival in the Middle East and a country with a far more democratic political system than that of the Saudis. But they are more quiet about the many abuses carried out in the kingdom.”

But back to ISIS… We now know it’s a more radical, more powerful, and more organized offshoot of al-Qa’ida…

ISIS’ spokesperson is a former movie theater employee from Calgary

Today, the group is worth a reported $2 billion.

And the U.S. and its allies are largely to thank for this. They have indirectly (and directly) funded ISIS to fight the Syrian regime…

[We spoke about how the U.S. made ISIS rich last week, here: Obama’s Dirty ISIS Secret]

The U.S. and cohorts have given ISIS the technological capacity, weaponry, and money to become a powerful force in the Middle East. And they’ve given them the ideological firepower to foment more domestic attacks.

“The leaders of Western countries are either utterly ignorant and stupid,” professor Michel Chossudovsky, an author and professor of economics at the University of Ottawa writes, “or totally corrupt and complicit.“

We opine it’s probably a batch of both.

To make matters worse, as mentioned, ISIS supporters are cropping up all around the world…

Around 150 Australians have left their homeland to fight alongside ISIS too.

And The Economist reports that possibly as many as 3,000 foreigners have joined ISIS from all around the world.

The “official” (see: easy) explanation is that British, Canadian, and American Muslims who have joined ISIS have been “brainwashed” by radicals.

“The idea that hundreds of British and other European Muslims fighting for [the Islamic State] were brainwashed or coerced by jihadist recruiters into joining is almost certainly wrong.”

Scientists like Scott Atran of the National Centre for Scientific Research in Paris say that most of the fighters are radicalized at home, and by peers.

“The brainwashing theory is baloney,” he tells NS.

Researchers across Europe have kept up with hundreds of foreign fighters through social media – and that’s their conclusion. No one is being brainwashed.

“Young people hooking up with their friends and going on a glorious mission.”

“But most researchers agree that, aside from the influence of peers, the following factors are important: a personal grievance, such as a crisis of identity, that opens them up to a new religious or political ideology; a sense that their cultural in-group is being persecuted; moral outrage at injustice (discrimination against a relative, for example); and access to a politically active network.”

And when their own country becomes a participant, it only sprays gas on the flames…

Another researcher, Peter Neumann, is paying close attention to what’s happening with the Muslim population in Britain.

he tells the Guardian:

“Now that [air strikes] are happening. you can see people are more turned on by the West versus Islam conflict, more excited than when the West was a passive participant.”

“Last night,” Harun Khan, deputy secretary-general of the Muslim Council of Britain chimed in, “a spokesperson for MCB was chairing an event with about 500 Muslims. They did a straw poll with the audience there and then.

“They put it to the people: how many would be in favor of air strikes? Three people put their hands up. The bombing itself will only create more hatred – ultimately there will be civilian casualties as well.

“It will feed into the narrative of ISIS.”

The takeaway? We should go away. We should, once and for all, stay out of it.

The “whole mess that we’ve been involved in in the Middle East,” Ron Paul said to RT in an interview last week, “has been technically illegal because we’ve initiated war, but we haven’t declared war.

“I consider what’s going on now, specifically in these last few weeks, totally immoral. I think it’s illegal under our laws and illegal under international law as well.

“We have to do a little bit more than just address the violence that is occurring, and forward the question: ‘Why is there violence?”

“Why should someone from 6,000 miles away, who’s been stirring this pot for so long, be the group that’s going to bring everyone together and organize the fight?”

Point blank: Another U.S. war will only make things worse. And that’s exactly what ISIS wants…

As ISIS’ so-called “spokesperson,” Shirdon explicitly stated in his interview with VICE:

U.S. involvement only feeds the beast. It only gives ISIS fuel to display the atrocities of the “demon” that is the Western world.

And, more importantly, it only makes you, me, and our families more vulnerable to terror attacks here in the U.S.

“We have to appreciate that the terror threats don’t just come out from nowhere,” journalist Dilly Hussain said during an interview with Russia Today, “they come as a result of foreign military intervention in the Arab region.

“So the Syrian conflict has been there for three years and is now approaching its fourth year,” he goes on. “There has not been a single terrorist act that accrued in Europe as a result of it. And now when we are going to see military intervention in Syria and Iraq, then there will be blowback in Europe.”

In Holland, the government announced last Wednesday they would send six F-16 fighter jets to fight ISIS. The Dutch defense ministry then advised police and soldiers not to wear their uniforms on public transport.

Still, they deny there is a link between government intervention and blowback.

“Let’s be serious,” Hussain says, “you are going to be sending in six fighter jets to bomb another country and all of a sudden you are telling your soldiers not to be dressed in uniform.

“Clearly, you must think your masses are gullible or stupid; there is clear link between military intervention and blowback at home.”