Visual Proof That This “BULL MARKET” Is A Scam

Many people on this site have been arguing that this “BULL MARKET” is a scam, purchased by the FEDERAL RESERVE BOARD’S NON-PRINTING OF MONEY. Some argue (the literalists) that the FED is NOT printing money — because they simply transfer money across spreadsheets from account to account. There is no actual printing of money involved. Some argue that the FED’s job is to stimulate the economy. But have they stimulated the economy? The Fed has spent trillions to make the economy recover: 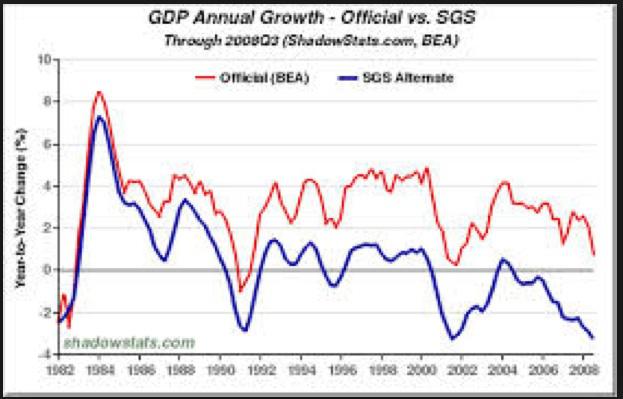 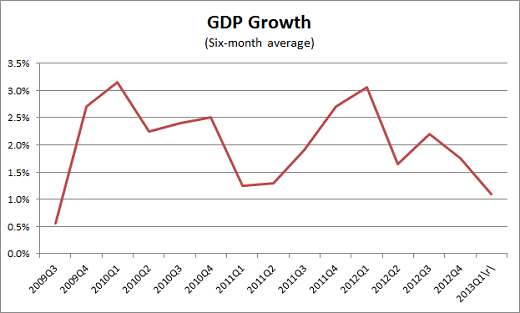 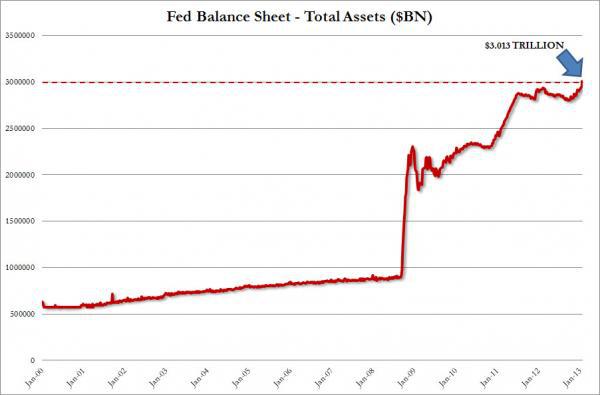 In truth, all the FED operations, the trillions of dollars the FED has spent — where does this money coming from? Is it not a tax on future Americans? — has not helped the real economy at all. It has helped the banks; yes, this is true.

One can argue where we might be without FED spending. My view is that we can’t grow because our mountain of debt is suffocating the country. My view is that we need to reduce total debt/gdp to a benign 130% — from its current astounding 350%. We have barely started to de-leverage, as the chart below shows. Note the magic number of 120-130% total debt/gdp after the 1873 panic, caused by real estate speculation and an accompanying debt bubble, and after the 1920’s land and house speculation and accompanying debt bubble. 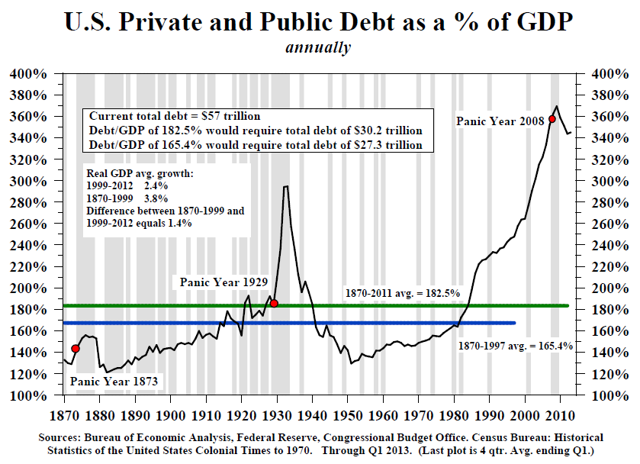 It took America more than 20 years to reduce debt/gdp from 280% to 130% during the last debt bubble (1929-1951) — how long might it take America to reduce total debt today some 63% to get back to the START OVER AGAIN level, where economic growth will again be possible?

But at least FED spending has helped stocks. Yes. We are not down 85% like the Japanese were twenty years after their housing bubble burst. But wait a minute. Hasn’t FED money bought the so-called Bull Market by taxing ordinary Americans future taxes to help Wall Street’s rich make even more money than they could have imagined. In fact, Wall Street created a crisis by mismanagement of risk and greed-compulsion trading, they brought down the entire global economy, and then the FED through WASHINGTON rewarded them by giving them free money. Isn’t that right?

Without FED buyout money there is no bull market rally. The chart below shows S&P returns if we subtract the FED newly printed money or newly unprinted money.

Pretty hard to argue against this chart that the FED has not financed this illusion of stocks rebounding. Are we going to need FED robbing the US Treasury year-after-year in order to keep this illusion of the Wealth Effect going. The FED has take money out of one pocket and transferred it to another. And in the process, the rich have gotten richer; and everyone else has gotten poorer.

Is this the end of our democracy; is it the beginning of the American Oligarchy or Plutocracy? Is this where we become a medieval country of landowners and serfs (debt slaves)? This has happened before; Roman history is one of the most recent examples of this end-pyre of the republic as an idea.

Many Americans defend the Fed because they say:

“Think about where we would be without the FED spending (so much of our future earnings)? Things could be much worse…”

We have lost our democracy. The nation is becoming an armed police state. Racial conflict is growing. The government is trying to sell us on another war, this time using a picture from 1950 to vilify Russia as a communist threat to America. Please have our government wake up. Russia is no longer communist; neither is China. They have followed us into the hallowed halls of capitalism, where everyone can get rich, everyone can be the president.

All around us Islamic nations are killing Christians, and have inaugurated the mirror-image of Christian Crusades that started off the last millennium. Russia is not our enemy. In truth, at the moment, and with our ignorant leadership, we are our own enemy.