The Cause of Income Inequality

Global Economic Intersection published the following article, Income Inequality: The Fundamental Reason It Is Growing, May 29th, 2014  (Written by Elliott Morss, Morss Global Finance)  From that article (my emphasis):

The single primary reason for the growing inequality is “labor saving” resulting from the Information Revolution.

New information technologies are replacing large blocs of middle class jobs and with more people out of work, wages have plummeted. Weaker unions? Maybe, but there is very little unions can do when the demand for their members falls as much as it has.

What has already happened coupled with future applications of information technologies will make an even larger segment of middle class workers redundant.

Simple enough. It’s the old “machines-replace-workers” argument that has existed since the beginning of the Industrial Revolution, back in the mid-1700s.

Here is the author’s reasoning:

US employment in durables goods production not grown much since 1947. But over this same period, the US Bureau of Economic Analysis estimates that durable goods value added in constant prices has increased ten times.

That means a worker today can produce ten times more than what a worker could produce in 1947.

Productivity gains and not overseas outsourcing is the primary reason for declining jobs in manufacturing.

Retailers and wholesalers are increasingly making sales via the Internet.

In education, the online element is growing. Significant labor-saving will result if online lectures by outstanding speakers are combined with follow-up teacher and student discussions.

The above snippets don’t do justice to the article, so I urge you to read it. But the point is clear. Computers are causing unemployment and lower wages for those who do have jobs – except of course for rich investors.

So what is the author’s solution?

Juliet Schor, an economist and sociologist has been thinking and writing about these issues for some time.

(She) recommends doing things that open up the labor market.

We could expand, rather than contract, social security eligibility. Smart countries with unemployment problems try to get senior workers to retire earlier.

We could give partial benefits for people to gradually reduce work.

Schor points out that shorter hours of work are possible at many levels-more schooling at the beginning of the work life, four day workweeks, and then tapering off hours at the end of the work life.

In short, the author claims the primary fault for the increasing GAP between the rich and the rest is the computer, which has replaced workers. One solution is to cut workers’ hours.

Do you believe it? I don’t, especially when I look at these two graphs: 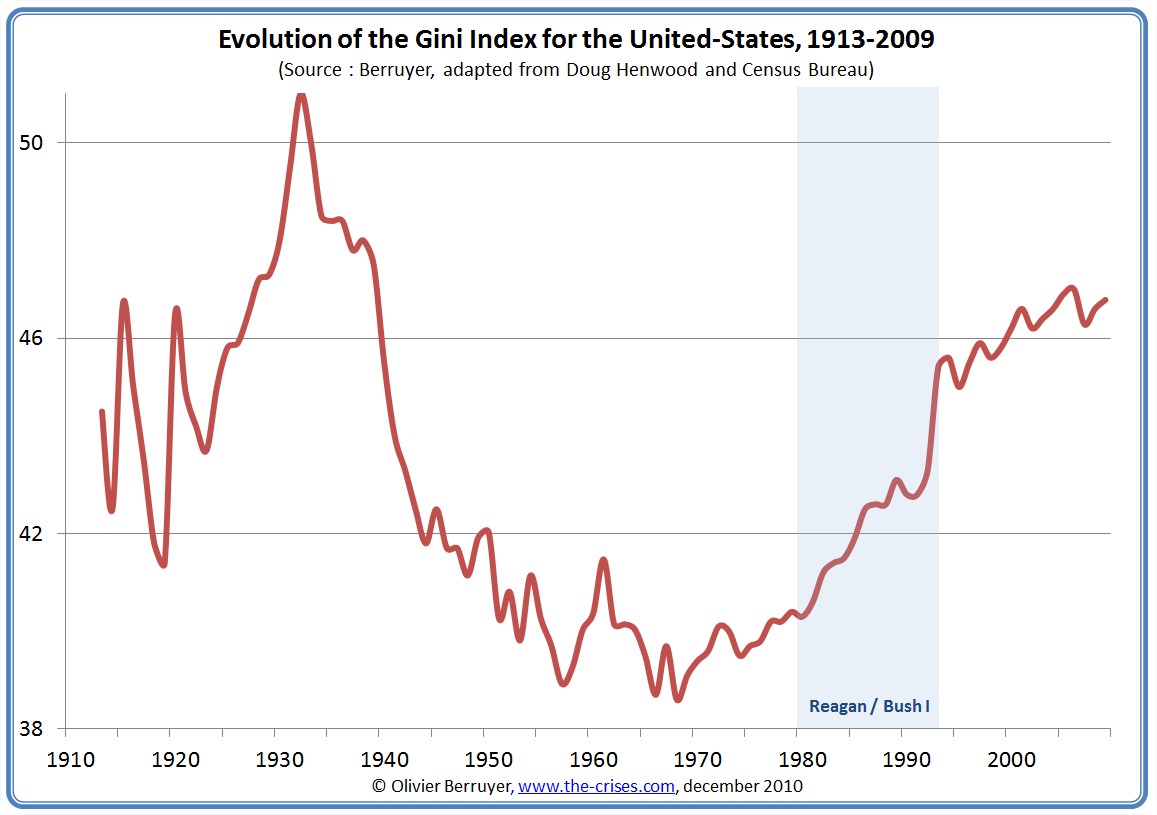 Unlike the St. Louis Federal Reserve Bank GINI graph (the measure of income inequality, aka “the GAP”), which begins in 1967, and seems to show inequality rising, rising, rising – this first graph (above) goes all the way back to 1912, and shows that inequality previously was much higher than now, immediately before and during most of the Great Depression – when the top income tax rate was low. (2nd graph)

Then during WWII, and through the early 1980s, when the top income tax rate was above average, the GINI ratio was low.

Finally, beginning with the mid-1980s, when the top income tax rate again dropped below average, inequality again has risen.

Bottom line: I agree with the author, who ends his article with the comment, “We are facing a real problem. There are no easy answers.”

But I question whether computers are the primary cause of income inequality. (An even more powerful case could be made that taxes should be more progressive).

And I surely question whether making people work fewer hours would help, since that merely would spread payrolls among more people.

There are multiple causes for the the cancer of excessive income inequality, so the cure requires a multi-drug approach.