The Fed Scam: An Example of Confusion

The Documentary of the Week just published is a confounding mixture of fact, misrepresentation and opinions some of which are sound (based on facts) and others are, well, just opinions. The video presentation is also missing any suggested actions to be considered (other than suggesting the viewer should buy gold and silver which is the sponsor’s business). This was originally to be an accompanying discussion of the video. It simply got too long for that and is posted separately here.

Some (but not all) of the probelms I have with the presentation are addressed individually in the following.

1.  How Money and Banking Works

Loans are not created by lending a fraction of deposits as represented in the video. This idea comes from an outdated concept called the loanable funds theory of banking. While it is still used in basic economics courses (as a model), it bears no relationship to the way banking actually works. Bank loans are created based on assets as security (a house, a car, a business, future earnings, etc.) and the money so lent becomes bank deposits. Thus, in the real world of money and banking, loans create deposits, not the reverse process.

As to the application of the loanable funds model, Prof. Gary Evans, Harvey Mudd College at the end of Chapter 3 of his unpublished book:

These examples offer an introductory exposure to the loanable funds model. The model can generally be applied for at least introductory analysis anywhere the issue of interest rate determination arises.

A footnote in the same Chapter 3 explains that the actual operations of the Federal Reserve are too complicated to include in the discussion of the loanable funds model:

The confusion about how money and banking actually operates is not isolated to this video; examples of leading economists mistakenly using the model to represent the real world occur all too often.

The process described in the video clearly shows the problem with the current system. The system provides private banking as a middleman in money creation for government operations. The condemnation of banks for siphoning money from the real economy is correct in my opinion. However, a solution is not presented in this video. Notice that the presentation is by “Gold, Silver and Mike Murphy”. Sponsoring web sites are selling gold and silver coins. The invitation is made to join a discussion on how to create a better monetary system.  I have not yet found such a discussion in any of the sites visited thus far.   Perhaps I need to watch more of the videos?

This particular video may be primarily an attempt to use education, albeit somewhat confused, to sell gold and silver. What is needed is a discussion of alternative monetary systems. I do not not feel that necessarily should be restricted to systems backed by gold, silver or any other commodity. This video does not offer any specific suggestions about what should be done so I am confused about what discussion the presentation is trying to start.

3.  Who Owns the Federal Reserve Bank of the United States?

The video maintains that the Federal Reserve Bank is a private corporation and cites the fact that it has shareholders (banks) in the private sector. It points out that the Fed pays a dividend to these shareholders at the rate of 6%. The video does not tell us what the cash value of the dividends is. The video does not describe what are the “earnings” for the Federal Reserve; nor does it account for where the earnings go.

First, the 6% dividends are paid on the paid-in stock value of the Federal Reserve to the member bank stockholders. In 2011 that total value of the paid-in stock was $26.3 billion. The 6% dividend amounted to $1.58 billion. After expenses and dividends, the balance of earnings is paid by statute to the U.S. Treasury. In 2011 this amounted to $75.4 billion (almost 48 times as much as to the banks). From 1914 through 2011 the following accumulated totals have been reported by the Fed: Net expenses, $81.3 billion; dividends paid, $44.1 billion; and earnings returned to the U.S. Treasury $886.5 billion, of which $842.3 billion was return of interest paid by the government on Treasury securities owned by the Fed.

GEI News reported the figures for Fed operations in 2013 on 11 January 2014 and displayed the following graph: 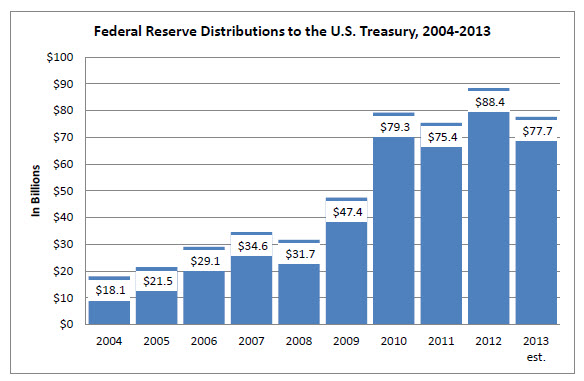 With the 2012 and 2013 payments added, the Fed has paid the U.S. government more than $1 trillion over its history and the bank stockholders have received less than $50 billion.

The question of who owns the Federal Reserve is still an open question and is not an open and shut case as the video would have you believe.  I have argued that the best characterization would be it operates as government sub-contractor.  That characterization has not been supported by most.  Others want it either to be identified as part of the government or as a private corporation.  The majority of those we have interacted with have taken the position that the Fed is part of the government.  I’m sticking with the little supported subcontractor characterization.

The numbers presented here are all readily available in the Federal Reserve Annual Reports.

An interesting and quite unbiased discussion of Who owns and controls the Federal Reserve is available at USA Gold.com

4.  Comments at The Hidden Secret of Money

It is clear that most of the commenters know only what the video has told them and do not have an inkling of the aspects of money and banking that the video has omitted or misrepresented. It is also clear that some commenters are sold on the value of buying gold and silver, which is the motive of production of this video I have inferred. This is obviously an effective sales presentation. I would ask those so convinced to buy gold and silver the following question: If you think the sellers believe what they are telling you, why are they accepting your worthless money for their gold and silver? Just to get a small sales commission paid in the same worthless currency? A few commenters on YouTube are a little more contentious than on the originating site and some ask this question.

The video claims that the creation of currency by the U.S. government in any other form than coins of gold or silver in the amount of the coin value is unconstitutional.  All standing rulings by the U.S. Supreme Court (SCOTUS) have found that paper money is constitutional and there is no standing ruling that any relationship to gold or silver is required by the constitution.  There was a ruling by a shorthanded SCOTUS in 1870 that declared unconstitutional the issuance of fiat greenbacks by the Lincoln administration during the Civil War.  That ruling was overturned the following year by a fully staffed court and that has not been changed by subsequent rulings.

So how can the video site a quotation about money only being gold or silver? The quote you see in the video is from the first paragraph of Article I Section 10 which reads in total:

No state shall enter into any treaty, alliance, or confederation; grant letters of marque and reprisal; coin money; emit bills of credit; make anything but gold and silver coin a tender in payment of debts; pass any bill of attainder, ex post facto law, or law impairing the obligation of contracts, or grant any title of nobility.

This relates to the powers of the states. The video totally ignores that and leaves the impression that it applies to the federal government.  The use of the words is pure and simple a slight-of-hand.

The video failed to present the section of the constitution that deals with the power of the federal government, which is Article I Section 8; it specifically includes in the list of enumerated responsibilities:

To coin money, regulate the value thereof, and of foreign coin, and fix the standard of weights and measures;

The SCOTUS (previous link) has established that the verb “coin” applies to the creation of money in any form, be it metallic or paper. Presumably a logical extension would be that the government could also use plastic, wood chips, sea shells or any other material it selected on which to “stamp” or “print” the assigned value.  An aside, only the federal government is authorized by the constitution to do this, for the very next enumerated responsibility after the one above is:

To provide for the punishment of counterfeiting the securities and current coin of the United States;

The misrepresentations made by the video in regard to creation of money are enough to dismiss the entire presentation as a fraud.  However, the guile of the video is that it is an artful mixture of real facts and sound opinions, along with misrepresentations and unsound opinions. Econintersect considered carefully before posting this video but decided to test the ability of our readers to discern truth from fiction. Therefore it is presented along with my lengthy disclaimer written here.

The video correctly identifies the debt-slavery relationships of our current monetary system.  However, the presentation does not present an alternative.  There are other videos in the series at The Hidden Secret of Money website and alternatives may be discussed in some of them.

It is my opinion that the current monetary system, which has the U.S. government paying interest to use U.S. currency, is not an efficient system for the economy as a whole.  It is a very efficient system for private banking interests to siphon money out of the real economy of goods and services.  But what value does that offer the economic welfare of all that is not banking?  If the argument is that it is a management process for regulation of the currency needed by the economy then that process is a considerable failure.

In view of the decline in the relative purchasing value of the dollar over the last 100 years, the American people should demand a return of all money made by the banks for operations dealing with the creation of money using the “faith and credit” of the U.S. government.  The claim for a refund would be “failure to perform”.

Since that is not a feasible option, my next best option is to modify the money creation system so the banks create money for the private sector based on the credit worthiness of those who seek private financing, and public expenditures should be made with money created directly by the government. The value of the dollar should be protected by sufficient taxation to remove money in excess of that needed to maintain a fully operational economy with limited inflation. In such a system, excessive credit issuance by banks that created inflation in any area (cost of living, commodities, assets, etc.) could be counteracted by a combination of reduced government spending and/or increased taxation.

Such a system would put banks in a position where any could fail without destroying the economy and the unholy alliance of government backing TBTF (too big to fail) banks would be ended.

There are many operational details to be pinned down in the separation I have proposed. Even opening the discussion would be strongly opposed by the banking sector because their lucrative monopoly on creating government backed money would be over. They would have to compete to provide needed services rather than have a guaranteed cut from every government operation. One avenue to follow would be to transform the Federal Reserve into the role of a public bank, as has been discussed previously (here, here, here and here).

An oversimplified summary slogan would be: Private money for private enterprise and public money for public operations.

Now go back and enjoy the video, or if you have watched it once, watch it again.

Documentary of the Week: The Fed Scam

The Week Ahead: Evaluating Risk and Reward for Stocks

The Week Ahead: Evaluating Risk and Reward for Stocks