The Nation of New Mexico

Random Thoughts from the High Desert: What if New Mexico became an Independent Nation with its own Central Bank?

The land area which today we call New Mexico was part of the new nation of Mexico until it was basically seized In 1848 and became the United State Territory of New Mexico in 1850 and a State in 1912. It is the fifth largest state by land area in the U.S and has abundant natural resources. I am not advocating secession but simply wondering what the implications of nationhood would be for the people of New Mexico. Also this is an exercise in understanding how states within the U.S. are in many ways similar to nations within the Eurozone i.e. those Members of the European Union which do not have their own currency but instead use the Euro.

When considering the impact of being a separate nation one way to begin is to ask what the pros and cons are of so doing. The table below is one way of looking at it.

How does New Mexico fit within the above framework?

The fact that New Mexico is substantially supported by the rest of the U.S. is very apparent. Thus New Mexico can not afford to lose its Federal sponsor. This sponsor provides essentially $5B a year to New Mexico over and above tax receipts received from New Mexico taxpayers which is equivalent to our State General Fund.

Some of the Federal spending is for two National Labs and multiple military installations which we could do without but currently provide income for many New Mexico residents. I have not gone through the exercise of netting out those Federal Expenditures which are in some ways intended to benefit the entire U.S. not just New Mexico so perhaps they can be subtracted from the receipt of funds to New Mexico.

But we have many other funding requirements including the management of forests and other Federal Land, management of many of our reservoirs, assistance to Native Americans, social security payments, Medicaid funding, etc. In many ways, New Mexico is not really a State but a very expensive Territory for the U.S. to maintain.

So New Mexico can not afford to be an independent nation. When you are too small to survive, one solution is to get larger. So what about what the U.S. Bureau of Economic Analysis (BEA) calls the “Southwest” which is Texas, Oklahoma, New Mexico and Arizona.

The send/receive ratios for the Southwest and other states are shown in the following map:

Because the map is difficult to read if printed in black or white, I have also included a table of the data in that map for the states of the Southwest.

But even if the sends and receives from the former Central Government would be essentially balanced out in the new Nation of The Southwest, the relative performance of the four economies have recently diverged as shown on this map. 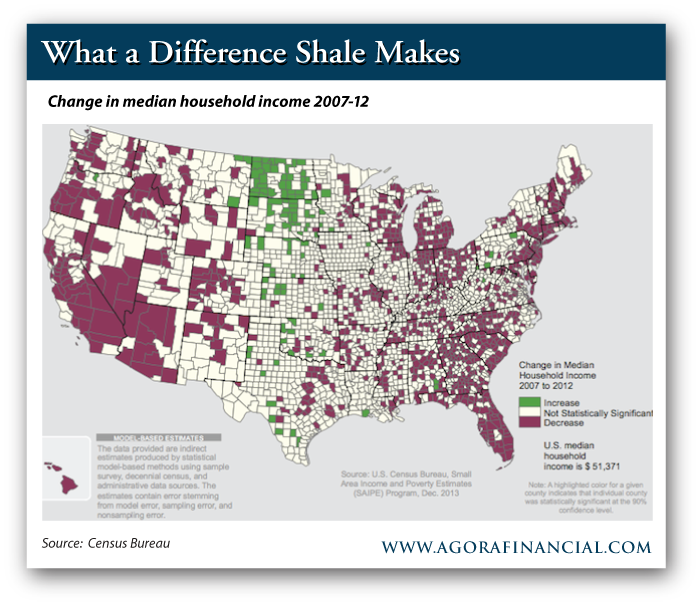 You can clearly see here the recent poor performance of New Mexico and Arizona as compared to Oklahoma and Texas. Thus we could easily see a difficulty emerging between a prosperous East Southwest and a deflationary/depressed West Southwest. In some ways the Southwest might resemble Europe.

Of course we know why Oklahoma and Texas are doing well. It is called fracking and horizontal drilling. These are concepts which are culturally anathema to many in New Mexico and Arizona so that could be an obstacle to confederation. But a good public relations campaign might overcome this and there exists some uniform culinary preferences of the residents of the Southwest and similar attitudes towards oppressive Central Government.

There may even be some reason for thinking that part of the northern tier of Mexico might fit in nicely with this new possible nation. There already exists pretty much free movement of people back and forth across the border between Mexico and three of the states in the Southwest. There is also considerable integration of the river and reservoir systems between the Southwest and Mexico. There is also to some extent for a substantial part of the population of the Southwest a shared language, religion, and cultural values. But I will leave the expansion of the discussion on the potential merger of the Southwest with part of Northern Mexico for a subsequent article.

We may want to look at some other characteristics of this potentially new nation.

Overall the New Southwest would have generally lower personal income tax rates but higher sales tax rates than the residual U.S. This would tend to create income inequality. As sales taxes are regressive and low income tax rates often are associated with higher property taxes. To be complete I should have considered corporation tax rates.

Access to Federal lands would provide Southwest with a substantial amount of land currently owned by the U.S. Federal Government. This includes over 61 million acres or approximately twice the size of New York State. This might but would not necessarily spur development and increases in property tax receipts. U.S. control over subsurface oil and gas extends in some case beyond the amount of surface land owned by the U.S. and many minerals such as gold and silver are controlled by the U.S. Federal Government with the ability of citizens to stake and patent claims.

How this land became Federal Land is interesting as to some extent it is land stolen from the Mexican settlers who became U.S. Citizens as a result of conquest by the U.S. of Northern Mexico. In the case of New Mexico the ownership of land was by the Treaty of Guadalupe Hildalgo intended to remain with those living in the conquered land but key entrepreneurs and other scoundrels enticed the Federal Government to essentially steal the land from the Hispanic citizens. This is a process that continues to this day.

The Central Bank of the Southwest.

The advantage of having ones own currency is that it is a lot easier to adjust in a world market by having ones currency appreciate or decline in value relative to other currencies than it is to have price levels adjust to allow one to achieve a balance of trade.

The U.S. provides foreign aid to Egypt and Israel among others and we have examined earlier in this article the very different ratios of money sent to D.C. versus what is returned.

One way or another, everything that enters a state within a nation or a nation must be paid for. That payment can be by money, borrowing, or seizure. To the extent it is money, workers must be willing to work for sufficiently low wages to make their products attractive to ones trading partners and wages must be sufficiently attractive to entice workers into the labor force. The U.S. is doing a poor job of handling this balancing act. Perhaps a smaller unit such as the Southwest would be able to achieve better performance.

There are many reasons to manipulate ones currency but a major reason is to impact your trade surplus or deficit. Some explanation of this is provided below:

Thus the devaluation or currency appreciation is the use of currency adjustments in lieu of other mechanisms to manage the trade balance. This occurs both naturally in the marketplace and by policy i.e. the Central Bank of the Southwest which I would structure to be a full service bank i.e. it would deal with both the state chartered banks and individual citizens. Thus if there was a need to stimulate the economy of the Southwest, there would be the usual option of stuffing money into the banks but also the option of bailouts directly of residents.

It is not clear what the trade balance of the Southwest would be. In terms of manufactured goods and food it would be a net importer. On the other hand, it would be a significant net exporter of energy for now hydrocarbon based but long term to include solar and wind energy.

Presumably part of the motivation would be to improve the economy of the Southwest and create job opportunities and a better qualified work force than exists currently. This means enlightened fiscal and monetary policy. In general monetary policy is more effective than fiscal policy so having a Central Bank and ones own currency is critical.

This of course only will work relative to the Residual U.S. and the rest of the World. It would not address imbalances within the Southwest.

But there remains the issue of legacy debt. Some residents of the Nation of the Southwest would owe money to others denominated in U.S. Dollars and some would own loans denominated in U.S. Dollars. So devaluing or appreciation the “Tortoise”,the new currency of the Southwest, would have certain implications. In general it is likely that the Remaining U.S. will be in a debtor position relative to the citizens of the Southwest who own U.S. Treasury obligations and will be exempt from any obligations with respect to the U.S. National Debt which clearly would not be very popular in D.C.

Economic Potential of the Southwest

Between the arid settings, mountain air, and saltwater locations, the potential for providing medical services, and tourism as well as being a retirement destination all of which is facilitated by having abundant low-cost land, the economic growth potential of the Southwest would appear to be significant.

As just one example, it might be able to become a healthcare center especially if the U.S. were to accept Medicare claims filed with the Southwest or under current rules (http://www.medicare.gov/Pubs/pdf/11037.pdf) there may be opportunities to develop medical centers close to the borders of the Southwest with the Residual U.S. Providing free or highly discounted medical services to U.S. Legislators might lead to the proper rules being put into place.

And the nation of Southwest might easily become an onshore/offshore sanctuary for those concerned about the safety of their U.S. Dollars.

As an aside, secession is not the only way to create economic subregions within the U.S.. States can cooperate and negotiate Interstate Compacts that supersede State Laws and are enforced by the U.S. Supreme Court. It is not out of the question to create regional currencies and there may be other ways to achieve the same benefits without having separate currencies i.e. indexing of compensation of government employees to the trade balance of the region to make adjustments less difficult than the current process of using Detroit-style financial collapse to force a decline in labor rates.

With respect to governance, the concept of dividing Texas into a larger number of smaller states might have some appeal. Texas at one time might have had that right as part of their Treaty with the U.S. when they joined the Union but apparently they have over time surrendered that right and it is prohibited by the U.S. Constitution. But of course that would no longer be a constraint within a new nation of Southwest.

Border security is an issue partly related to the large amount of U.S. owned land and sparsely settled Native American land near the border with Mexico in New Mexico and Arizona.

This New Nation of the Southwest would have many miles of shoreline along the Gulf of New Mexico including deep water ports. But border security would be a problem. Here is what the situation looks like today.

The large amount of Federally Controlled land complicates achieving border security in Arizona and New Mexico. Decisions on the former Federally held government land would have to be reviewed to determine the best use of this land. I have to assume that the citizens of the Southwest would prefer to have those decisions made locally rather than in Washington D.C.

We may want to look at some of the other chacteristics of this potential new nation.

Investing in 2014: How About The Philippines?